Doug Ford wants to see how bad Ontario’s finances truly are in his first act as premier, the Progressive Conservative Leader announced a day after his party rode a wave of discontent to secure a majority government in Canada’s economic heartland.

Tory advisers began working with Premier Kathleen Wynne and her Liberals in the hours after the PC victory to ensure a smooth transition of power, the premier-designate said on Friday. Mr. Ford, an unconventional leader who portrays himself as an anti-politician, will bring an end to 15 years of Liberal rule in Ontario and take the reins of government in three weeks.

“We know the hard work has just begun, but we intend to act fast … we’ve already hit the ground running,” Mr. Ford said in a news conference in Etobicoke, an area of Toronto long associated with his supporters in the so-called Ford Nation. “We have a clear mandate from the people and we want to make sure, over the next four years, our mandate gets fulfilled.”

Before he can deliver on his populist agenda, which includes slashing income taxes, ending the province’s cap-and-trade system to cut carbon emissions and reducing the minimum price of a bottle of beer to $1, Mr. Ford said his first order of business will be to hire an outside auditor to scrutinize the province’s books.

The outgoing Liberal government had projected a deficit of $6.7-billion this year, but the Ontario’s Financial Accountability Office has warned the shortfall could be as high as $12-billion.

“We have to see the financial situation that’s been left behind, and over the next couple days and weeks, you’re going to hear from us, but the most important thing is getting our fiscal house in order,” the premier-designate said.

Mr. Ford, whose only previous experience in politics was a term from 2010 to 2014 as a Toronto councillor, met with Ontario’s Lieutenant-Governor on Friday morning and was invited to form a government. Ms. Wynne and her cabinet will remain in place until June 29.

Mr. Ford’s transition team, which will ease the Tories into the driver’s seat of the second-largest government in the country, will be led by Chris Froggatt, who was a chief of staff in prime minister Stephen Harper’s government. The team will also include former Conservative MP John Baird and Simone Daniels, an executive from the Ford family’s label-printing business.

Dean French, one of Mr. Ford’s closest advisers during the campaign, will be his chief of staff at Queen’s Park.

The Tories won 76 seats on Thursday, while the perennially third-place New Democrats vaulted into the official opposition with 40 seats. The Liberals were reduced to seven seats, one short of official party status.

After what she said was a “tough night” that included stepping down as Liberal Leader, Ms. Wynne said it is time for her party to rebuild. She expects the process to take four years.

“That rebuilding will happen starting today,” Ms. Wynne said, adding that she intends to stay in the legislature to represent her Toronto-area riding.

Ms. Wynne told reporters at Queen’s Park on Friday that she hopes Mr. Ford will extend official party status to the Liberals, which would provide them with money for research and an administrative staff, and allow them to have a role in Question Period in legislature and committee meetings. Mr. Ford said he would discuss the idea with his cabinet.

NDP Leader Andrea Horwath did not support Ms. Wynne’s call for the Liberals to be given official status. Voters gave the party seven seats and not the eight it would need, she noted.

With the left-leaning Liberals so weakened, Ms. Horwath said her party would be there for those opposed to Mr. Ford. “New Democrats will be the voice of all these Ontarians,” she said. 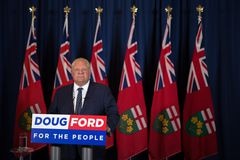 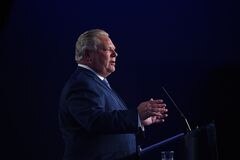 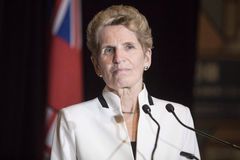