The union representing Ontario’s public high school teachers said Friday it will hold another one-day walkout next week, the latest in a series of targeted job actions aimed at ramping up pressure on the province during stalled contract talks.

The walkout on Wednesday — the fourth held by the Ontario Secondary School Teachers’ Federation in just over a month — will affect eight boards across the province including the Peel District School Board, which is the second largest in the country.

Union president Harvey Bischof said Friday that after more than eight months of talks with Premier Doug Ford’s government little progress has been made on key issues including class size and mandatory e-learning requirements.

“Our job action next Wednesday will affect some school boards for one day, but the Ford government’s policies, if we are not able to reverse them, will continue to create chaos in the education system for years to come,” he said in a statement. “Ontario students deserve better, and that is exactly what we’re fighting for.”

The union, which represents 60,000 teachers and education workers, began one-day walkouts on Dec. 4 with a job action that closed schools across the province. It has followed up with weekly rotating strikes that have closed all secondary schools and some elementary schools at the impacted boards.

Mr. Bischof said that the main issues at the table continue to be related to the quality of education, but Education Minister Stephen Lecce has repeatedly said the key sticking point is compensation — with the union demanding a two per cent wage increase.

The province has passed legislation to cap public sector wage increases at one per cent per year over the next three years.

“This is why we will continue to vigorously champion the interests of students and seek stability for parents in 2020 who are frustrated and tired of the union-led escalation that began in 2019,” he said in a statement. “This continued strike action is unfair to students and their families.”

NDP Leader Andrea Horwath said Friday that Mr. Ford appears to be “digging in his heels” on plans to cut the education system instead of bargaining to get a deal.

“The students who will lose another day of school on Wednesday continue to pay the price as pawns in the fight Ford picked with teachers,” she said in a statement. “It’s time for Ford to fully reverse his devastating education cuts, so the two sides can bargain a deal and get everyone back to class.”

In December, a government-appointed mediator called off negotiations between the province and the union saying the parties remained too far apart. Bargaining is expected to resume later this month.

Mr. Bischof has said the union was not ruling out further job action — including a full strike — if a contract with the province couldn’t be reached. 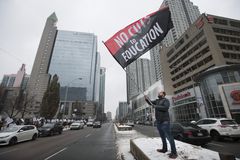 Teachers in Ontario’s French-language system vote 97 per cent in favour of a strike
December 20, 2019