Tens of thousands of people are without power as hydro and construction crews continue to tackle the worst of the devastation in Ottawa in the aftermath of two powerful tornadoes that destroyed hundreds of homes.

Four people were still hospitalized with storm-related injuries on Sunday and neighbourhoods looked like war zones as residents and volunteers pitched in to clear debris left by the two twisters that touched down late Friday afternoon. They brought winds that Environment Canada says reached 265 kilometres an hour.

At one point, more than 200,000 hydro customers in Ontario and Quebec were without power. Service was gradually being restored, but 50,000 in Ottawa alone still had no electricity late Sunday afternoon. A key transformer station in the city was destroyed in the storm and it will be several days before many homes are back online.

Prime Minister Justin Trudeau said the federal government is prepared to assist those whose lives have been turned on end. And Ontario Premier Doug Ford visited the wreckage on Sunday afternoon, saying he was impressed with the co-ordinated response to the disaster.

"We’re here to assure everyone in the region that’s been affected that we’ll spare no expense, we’ll do whatever it takes to make sure we get people back on their feet,” Mr. Ford said as he travelled through the community of Dunrobin, in the west end of the city, with Ottawa Mayor Jim Watson. Dunrobin suffered the worst of the storm, with 60 buildings damaged and several taken right to the ground.

But areas of Gatineau, across the Ottawa River from the capital, and large parts of eastern Ottawa also saw houses ripped apart. Trees were blown through roofs, vehicles were crushed by debris and tipped over by the wind, and an entire row of hydro poles was toppled on Greenbank Road, one of the city’s main thoroughfares.

The City of Ottawa opened up recreation centres to allow people in the devastated areas to take showers or power their cellphones. It also encouraged food-truck operators to visit the most affected neighbourhoods.

Some people whose homes sustained major damage have been told it will be more than a week before they can go back in to retrieve clothes and other essential items.

Glenn Johnson, who lives in the west end of Ottawa, says a construction crew that arrived at his home on Sunday morning told him it will be months before the repairs can be completed.

Mr. Johnson and his partner, Pam Cogan, were at home Friday when the tornado warning sounded on their cellphones. As the skies grew ominously dark, they heard what sounded like a huge truck engine revving in their backyard, and then their ears popped with the change in air pressure. They gathered their cats and dogs and ran for the basement, but just as they reached the door to the lower floor, the kitchen window imploded, sending glass flying to the front of the house.

With a few minor cuts, the pair took shelter as the intense winds blew overhead. Then they emerged to a changed world.

A bedroom window was gone, as was part of their roof, their siding was buckled and the top of a spruce tree from 50 metres up the road lay at the end of their driveway. “But the house just across the street lost the second storey. So, in perspective, we’ve got some damage but a lot of people got hit a lot worse than we did,” Mr. Johnson said Sunday.

Amid the devastation, there have been many tales of kindness.

Neighbours with electricity have stepped in to help feed and shelter those without. More than 3,000 people were fed hot meals on Saturday at a community centre in the suburb of Barrhaven. Hydro workers have arrived from other parts of the province to help repair the electrical grid. And private companies have donated dumpsters for the disposal of food that is rotting in unpowered refrigerators. 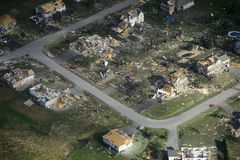 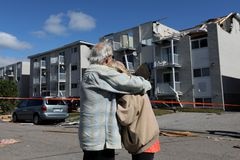