A resolution to the row between Canada and the Philippines over rotting refuse appears imminent.

Environment Minister Catherine McKenna said Wednesday she thinks a solution can be found “in the coming weeks” to the argument over who’s responsible for dozens of containers of Canadian garbage that have been sitting in a port in Manila for almost six years.

Philippines’ Duterte threatens to ship containers of trash back to Canada

A Global Affairs Canada official, speaking on condition of anonymity because the negotiations are still under way, told The Canadian Press Wednesday it’s expected that the garbage will be returned to Canada.

“It’s likely that is the resolution,” said the official, who was not authorized to speak publicly about the matter.

The Canadian ambassador in the Philippines made similar comments to the Philippine News Agency Wednesday, a day after Filipino President Rodrigo Duterte threatened to “declare war” on Canada over the trash.

More than 100 containers arrived in the Philippines in 2013 and 2014, sent by a Canadian company that had labelled them as holding plastics for recycling. Filipino inspectors found they mostly contained household garbage, with only about one-third of the contents being plastics that could be recycled.

The Philippines asked Canada to take back the shipments, citing the Basel Convention, an international treaty that is supposed to prevent developed countries from shipping waste to the developing world without the receiving countries’ consent. Canada has been trying to convince the Philippines to dispose of it there but a Filipino court ordered the garbage sent back to Canada in 2016.

About two dozen containers were disposed of in 2015 in the Philippines. The rest are still sitting in the port.

Duterte told Filipino media Tuesday if Canada didn’t deal with the mess by next week he was going to ship the containers back to Canada himself, after dumping some of their contents on the Canadian Embassy in Manila.

Canada and the Philippines established a working group last fall to finally sort out the matter. There remain some legal issues to be worked out that are slowing down the talks.

Who will pay for the return shipments is one of the outstanding questions. Documents obtained by The Canadian Press via an access-to-information request show that in 2017, Canada was willing to allow the garbage back as long as the Filipino importer paid for the shipping. Once the containers arrived back in Canada, the government would go after the Canadian company that sent them in the first place to pay for and finalize the proper disposal, under the Customs Act.

New Democrat MP Gord Johns said Canada’s lack of action on this file, under two governments, is an international embarrassment.

“The prime minister needs to apologize to the Filipino people and make this right,” said Johns. “Canadians would never put up with another country dumping garbage here.”

The original request to Canada to take the garbage back came in 2014. It was one of the first things Trudeau dealt with, on a trip to the Philippines within weeks of taking office in 2015. He was asked about it again in 2017 on another trip to Manila, and on that trip discussed the matter directly with Duterte.

Trudeau said then he felt it was possible to solve the problem.

The documents show a flurry of emails among government officials just ahead of that trip, looking for information to brief Trudeau. The main questions were whether Canada had “done everything we need to do” and “are we now in a legal position to resolve this issue.”

Whatever answer Trudeau was given in 2017 is blacked out from the documents. 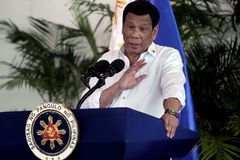 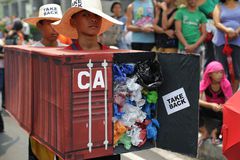