Carla Qualtrough also said Ottawa is considering establishing national standards on living conditions that would have to be met for employers to qualify for the program.

“We still are at the point where people are sick and people are dying, and work conditions aren’t safe,” Ms. Qualtrough said in an interview Thursday. “There’s a power imbalance that exists in this system that has to be acknowledged, so that we can fix it.”

Her comments were made after a Globe and Mail investigation into outbreaks among migrant farm workers published this week revealed a sea of factors that made them vulnerable to the virus, including overcrowded accommodations; supervisors putting pressure on ill labourers to keep working; no sick days; and a lack of personal protective equipment. While Ottawa issued rules for the mandatory 14-day quarantine for international arrivals, the conditions that workers faced after isolation – particularly the reality of life in farm bunkhouses – weren’t adequately monitored. Advocates and community health care workers for months warned federal and provincial politicians, as well as local public-health officials, that migrant workers were at a heightened risk, according to interviews and letters obtained by The Globe.

Despite adjustments to the program in recent months, Ms. Qualtrough, the federal Minister of Employment, Workforce Development and Disability Inclusion, acknowledged that the government’s handling, post quarantine “has floundered a bit. And we need to up our game.”

The federal government will “quickly” step up measures, including in-person, unannounced inspections of farms that would monitor both living and working conditions, Ms. Qualtrough said.

More than 600 migrant farm workers have been infected with COVID-19 in Ontario alone. Two men from Mexico – Bonifacio Eugenio Romero, 31, and Rogelio Munoz Santos, 24 – have died. The outbreaks have captured the attention of the highest levels of the government in Canada and Mexico. Prime Minister Justin Trudeau has discussed the matter with his Mexican counterpart.

When asked about the scope of an overhaul in the Globe interview on Thursday, Ms. Qualtrough said “nothing is off the table.”

Oversight of the program falls into a patchwork of jurisdictions, allowing living conditions to fall through the cracks. Accommodations can range from apartments to bunkhouses, trailers and storage sheds. Ultimately, now “the buck stops with me,” Ms. Qualtrough said. “We got to figure out what the 2020 temporary foreign worker program looks like.”

Although living conditions are primarily a provincial responsibility, she said, that “doesn’t mean we can’t show national leadership.”

“People came out of [the quarantine] environment healthy. And they’re not healthy any more. So what has happened has happened in Canada, and therefore we need to take a leadership role and try and do right by people,” the minister said.

The temporary foreign worker program has been reviewed before – in 2016, for example. A truly effective overhaul would start with being honest about what the gaps are between jurisdictions, said Susana Caxaj, assistant professor at the University of Western Ontario’s school of nursing, and a co-ordinator with Migrant Worker Health Expert Working Group. Right now, access to services such as legal protections and health care are patchwork and not comprehensive.

On April 3, Prof. Caxaj and five other experts in the field sent detailed health recommendations to the federal government. It said that until adequate oversight and co-ordination with health authorities are in place, Ottawa should stop bringing migrant agricultural workers into Canada. It also said that current federal guidelines “put too much responsibility on employers, and in fact, sets them up to fail, as current outbreaks suggest.”

Pablo Godoy, the Calgary-based liaison for Mexico with the United Food and Commercial Workers union, said he is pleased to hear the minister’s words but is eager to see what comes next. “We’re at a moment where action is needed – our organization has spent almost three decades saying these things,” he said. “It comes as no surprise.”

Any overhaul of the system, he said, must be done in close consultation with groups like his and with workers themselves. He also said that better regulations and enforcement are only half the battle; an independent oversight body must be struck so workers have a proper outlet to air complaints, without fear of reprisal from employers.

The current system puts far too much power into the hands of employers, who too often take advantage of workers with precarious immigration status, he said. For many workers, their status in Canada is tied directly to their employment with a particular farm. “This trust-based system, where there’s so much trust of employers, is problematic in our eyes,” Mr. Godoy said.

He pointed to housing conditions as an obvious example of employers managing to skirt rules aimed at ensuring the well-being of migrant workers. While local public-health officials have a role to play in terms of housing inspections, he said the responsibility for the health and safety of workers ultimately lies with the federal government, which manages the TFW program. Ottawa has the power to conduct pro-active inspections of farm accommodations, but during a six-week period at the height of the pandemic, these audits stopped. They are now being done virtually.

“With some of the housing conditions we’ve seen, it would be pretty absurd to think that somebody went into these places and said, ‘Absolutely, let’s house some people in roach-infested facilities that don’t have washrooms,‘ ” Mr. Godoy said. “In some cases, people are being put in bunkers with porta-potties for toilets. Even if [the accommodations] are being inspected and approved, there’s something wrong with the process.”

The Globe has reviewed the Employment and Social Development Canada form used by inspectors when they visit housing being assessed under the seasonal agricultural worker program and other streams under the TFW program. A description of the house is required for “record-keeping;” among the options to select is “converted storage area.” The inspection covers the condition of ceilings, toilets and kitchen appliances, as well as access to hot and cold water. It asks whether the housing is “exempt from all traces of rodents, parasites or [harmful] insects,” and whether there is sufficient basic furnishing. The form says there should be one toilet and one shower per 10 workers.

The Globe’s investigation exposed housing conditions that did not meet this criteria. Photos, videos and interviews portrayed holes in ceilings; broken toilets and stove tops, which in one case resulted in one working toilet and two functioning burners for 19 people; showers that only ran hot water; bedbug and cockroach infestations; and nowhere for workers to store their clothes and other personal effects. 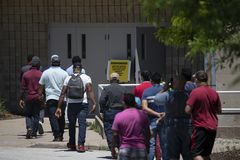 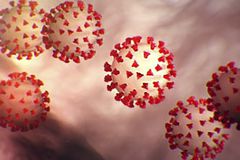 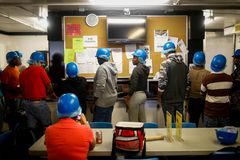 Coronavirus information
The Zero Canada Project provides resources to help you manage your health, your finances and your family life as Canada reopens.
Visit the hub
Follow Tavia Grant and Kathryn Blaze Baum on Twitter @taviagrant @KBlazeBaum
Report an error Editorial code of conduct
Due to technical reasons, we have temporarily removed commenting from our articles. We hope to have this fixed soon. Thank you for your patience. If you are looking to give feedback on our new site, please send it along to feedback@globeandmail.com. If you want to write a letter to the editor, please forward to letters@globeandmail.com.
Comments