Mr. Blair filed a statement of claim against Mr. Ford in Ontario Superior Court on March 15.

Last fall, Mr. Blair was a deputy commissioner and interim leader of the Ontario Provincial Police, Canada’s second-largest police force. He was passed over for the top job by a government-selected hiring panel that picked a friend of the Premier.

The Progressive Conservative government’s Nov. 29 decision to appoint Toronto Police Superintendent Ron Taverner led to a lingering controversy over the potential for politicized policing. Early this month, the government fired Mr. Blair from the OPP, the same week Supt. Taverner withdrew his candidacy for the job. The government has since appointed a new permanent police commissioner.

A spokesman for Mr. Ford said the Premier will respond to the statement of claim. "The Premier’s concern is, and always has been, protecting and supporting the front-line OPP officers who put their lives on the line everyday to protect our communities,” Simon Jefferies said.

A war of words broke out after the government announced the appointment of Supt. Taverner. In December, Mr. Blair launched a legal action in an attempt to force a review of the hiring process. He publicly alleged that “political interference and cronyism" could affect OPP operations.

In December and January, Mr. Ford suggested to reporters that Mr. Blair was motivated by spite and had violated the Police Services Act (PSA) by going public.

“It’s unfortunate that one person has sour grapes … and reacting the way he’s reacting and breaking the police act numerous times,” the Premier said in one televised interview. “Someone needs to hold him accountable, I can assure you that.”

The statement of claim points out that the Police Services Act (PSA) is an Ontario law that specifically exists to deal with allegations of police misconduct. It lays out legal processes that police institutions must undertake in any disciplinary investigation before making adverse findings. Officers found guilty of infractions can face serious sanctions, such as docked pay or dismissal.

This is a key point of the lawsuit, which argues that Mr. Ford’s statements would lead any average person to believe “that former Deputy Commissioner Brad Blair has been found to have committed misconduct under the PSA.”

Mr. Blair says in his statement of claim that to his knowledge, no such proceedings have been initiated against him. He asks the courts to order the Premier to compensate him with $5-million – $2-million in general damages, $1.5-million in punitive damages, and another $1.5-million in “exemplary and/or aggravated” damages.

The claim adds that, potentially, millions of people read or heard about Mr. Blair through the remarks of Mr. Ford, who “intentionally, deliberately and maliciously disseminated allegations of numerous violations of the PSA" in the media.

Mr. Blair served the Premier in January with a legal notice of his intent to sue. "To date, Premier Ford has not issued a full and final retraction of his remarks,” the statement of claim says.

No statement of defence has been filed, but the spokesman for the Premier said one is coming. “Premier Doug Ford will be responding to Mr. Blair’s filing through his legal counsel,” Mr. Jefferies said on Wednesday. “As the matter is before the courts, it would be inappropriate to comment further.”

The libel suit is distinct from the legal action Mr. Blair launched in December. In that one, he is asking an Ontario divisional court to order the provincial ombudsman to review last fall’s hiring process. Last week, his lawyer, Julian Falconer, suggested a wrongful-dismissal suit may also be coming.

The Integrity Commissioner of Ontario, an independent watchdog, ruled last week after a months-long investigation that the hiring process that picked Supt. Taverner was “flawed" and “troubling."

Although he found no wrongdoing on the part of the Premier in the hiring process, Integrity Commissioner David Wake urged the government to commit to an independent, transparent process for appointing future OPP commissioners. 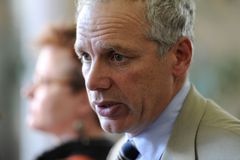 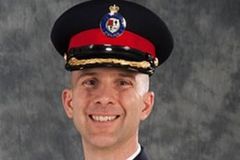 Follow Colin Freeze and Laura Stone on Twitter @colinfreeze @l_stone
Report an error Editorial code of conduct
Due to technical reasons, we have temporarily removed commenting from our articles. We hope to have this fixed soon. Thank you for your patience. If you are looking to give feedback on our new site, please send it along to feedback@globeandmail.com. If you want to write a letter to the editor, please forward to letters@globeandmail.com.
Comments are closed