Dwight Coish, a cigarette dangling from his lips, cuts through the noise of the babbling river with a whip of his fishing rod, sending his line into the dark pool. And then he waits.

Fly fishing has always been a sport of patience. The Gander River is considered some of the best salmon fishing in Newfoundland and Labrador, attracting legions of fishermen who’ve spent years getting to know every boulder and every pool along it. But anglers here are needing even more patience than usual, as rising water temperatures and lower water levels are limiting their ability to fish.

This summer, Fisheries and Oceans Canada (DFO) imposed restrictions on rivers and tributaries across central Newfoundland, banning fishing past 10 a.m. Mr. Coish and other anglers said conditions in the water were noticeably balmy, part of a warming trend that concerns biologists across the region.

“Some years, you’d almost want a Ski-Doo suit on underneath your waders, because the water is that cold,” said Mr. Coish, wearing a faded green fishing vest and camo bucket hat. “But this year, it’s almost the same as a bathtub.”

Newfoundland and Labrador’s central region was hit by a heat wave in July and August that caused the worst forest fires in more than 60 years. The heat caused the DFO to enforce warm-water protocols that are increasingly being used in some of the most famous fly-fishing rivers in Atlantic Canada, including the Gander River in Newfoundland, the Miramichi and Restigouche rivers in New Brunswick and the Margaree River in Cape Breton, where anglers say water temperatures are rising rapidly.

Newfoundland and Labrador has one of the healthiest and strongest populations of wild Atlantic salmon in North America, but even here the stock is falling. One of the biggest reasons is believed to be climate change, in addition to predators, poaching and what biologists call “genetic introgression,” or interbreeding with escaped farmed salmon, in areas where aquaculture is prominent.

Wild salmon, as tenacious as they are to be able to swim from their home rivers across Atlantic Canada to Greenland and back in preparation to spawn, are very sensitive to changes in their environment. Water temperature in the rivers where their lives begin is a key factor.

An optimal temperature for adult Atlantic salmon is in a range between 14 C and 20 C. Prolonged exposure to water outside of that begins to cause physiological problems. Above 23 C, the fish can become stressed, and anything beyond 28 C can be lethal for salmon.

The DFO says it considers other factors, such as water levels and the weather forecast, whenever river temperatures rise above 20 C in deciding whether to restrict fishing.

“When things are affecting flow, water quality, temperature, Atlantic salmon will be one of the first species to disappear,” said Neville Crabbe, executive director of communications for the Atlantic Salmon Federation. “That’s the story of Atlantic salmon.” 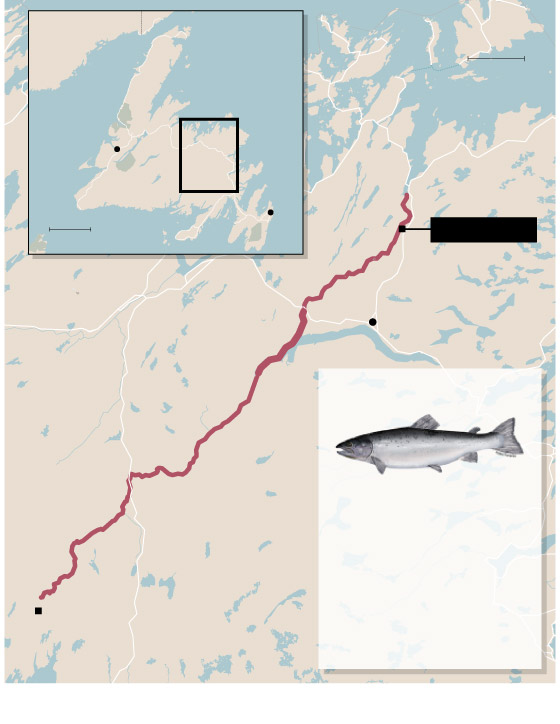 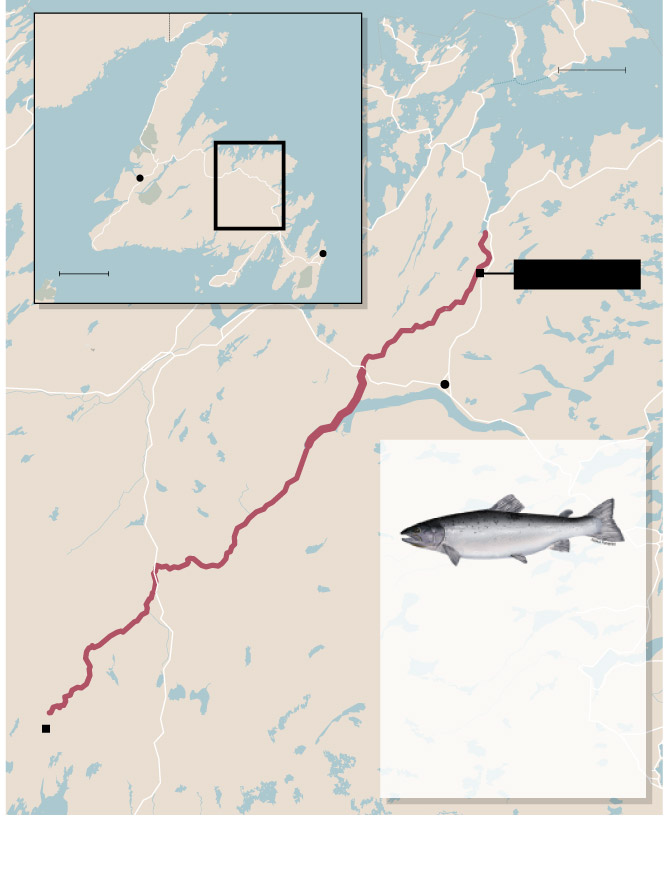 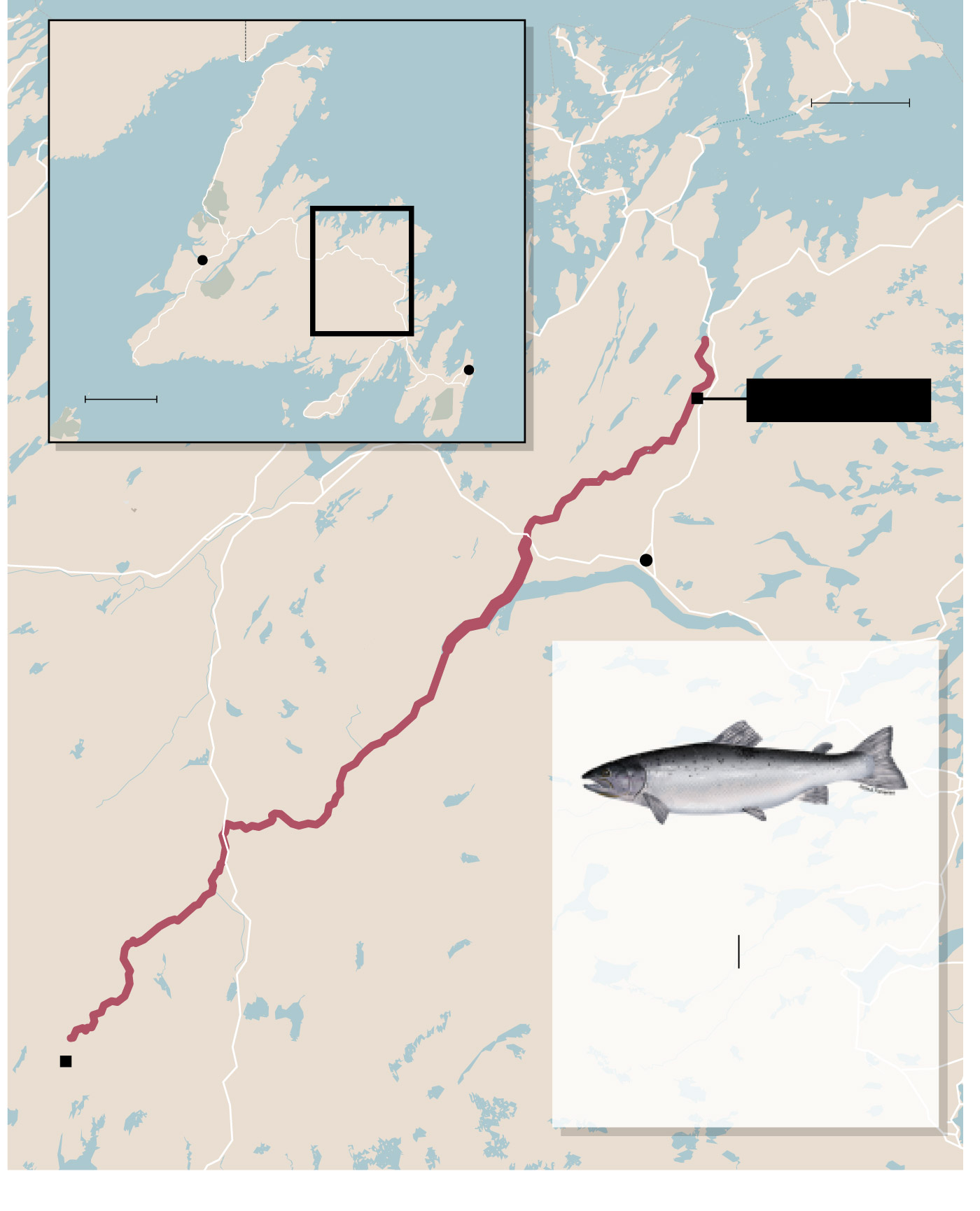 Warming temperatures are a troubling trend conservationists are watching closely, and have long been trying to counter by building cool-water refuges in rivers that act as a shelter for fish trying to escape the heat. But the pace of the warming has been difficult to keep up with, for both salmon and those trying to protect the population.

“Salmon are a cold-water fish. And while they are able to physiologically adapt, the real challenge now is the speed of the change,” Mr. Crabbe said. “It’s challenging their ability to adjust.”

Atlantic salmon are already disappearing from some of Canada’s southernmost rivers. The St. John River, which runs the length of New Brunswick into the Bay of Fundy, has gone from having one of the largest wild Atlantic salmon populations in the world to just a few hundred fish, Mr. Crabbe said. Some of that drop is directly related to rising temperatures, he said.

In the U.S. northeast, the disappearance of wild salmon is even more pronounced. The fish once existed as far south as Long Island Sound, but are now only found in a handful of rivers emptying into the Gulf of Maine and are listed in the U.S. Endangered Species Act.

Groups like the Atlantic Salmon Federation are trying to restore fish habitat, demolishing old river dams that block their spawning routes and installing passages and fish ladders, but those measures can only do so much.

Fly fishermen love wild Atlantic salmon because they’re some of the biggest fish in many east coast rivers, and they put up a stubborn fight when they’re hooked. But high water temperatures take the sport out of catching them, they say, as the fish congregate in cooler pools to escape the warmth.

This year in central Newfoundland, salmon were already behaving sluggishly in July, weeks ahead of the usual peak summer heat in August, Mr. Coish said. Water temperatures have become such a topic of discussion in fly-fishing circles that many anglers now check the river conditions themselves to ensure it’s okay to fish.

“Fifteen years ago, I’m not sure many people were carrying a thermometer in their fly vest. But now it’s very common,” Mr. Crabbe said.

Mr. Coish, and many other anglers, say they support the fishing restrictions to protect their beloved salmon. He’s been fishing for years, and he doesn’t want to see salmon stocks reduced any further.

“I totally agree with it. If the water gets that hot, you’ve got to close it down,” Mr. Coish said. “Our summers are getting warmer faster, and they’re way hotter. We’ve got to do something to help the salmon.”

Dolphins delight with return to B.C. waters, but some see ‘invasive species’
‘Glaciers can’t get a break’: How climate change is affecting Canada’s icy landscape
To save Africa’s penguins from extreme weather and heat, conservationists get creative