Dave McGinn
Published May 15, 2021 Updated May 16, 2021
Comments
Text Size
Please log in to listen to this story. Also available in French and Mandarin. Log In Create Free Account

Stephanie Beattie is still holding on to hope that her 17-year-old son can attend overnight camp this summer, but with each passing day that hope grows increasingly dim.

Her son, who attended overnight camp for three summers prior to the pandemic, has been looking forward to returning this year as an escape from the lockdown measures, online learning and other facts of life during the pandemic, said Ms. Beattie, who lives in Barrie, Ont.

If camp is cancelled, she worries it will further damage his mental health.

“My son absolutely goes in and out of depression,” Ms. Beattie said. “He will go into a much darker place than he’s in now. He will lose hope.”

Only Quebec and New Brunswick have so far given the green light for overnight camps to operate this summer, while camps in the rest of the country are still in the dark, said Stephane Richard, president of the Canadian Camping Association.

Some summer camps have already decided it is too late to wait to hear from the government and have cancelled overnight programs. Staff, usually students who want the guarantee of a summer job, aren’t applying. Many camps that are already struggling financially are reluctant to take on more debt, such as signing contracts with food suppliers, given the current uncertainty. Unless camps are given word from the government in the next two weeks, it will be too late for most if not all to operate this summer, said Jack Goodman, chair of the Ontario Camps Association COVID-19 task force.

“We’re way past a safe date now,” said Mr. Goodman, who is also the owner and director of Camp New Moon, in Baysville, Ont. “Is there an absolute drop dead date? When we get ourselves to the end of May we have some tremendously important decisions to make in terms of massive food contracts with suppliers. We’re about to put in large orders. Everyone is way into the red already and when people get into a very precarious state of uncertainty at the beginning of June the rate of attrition is going to accelerate tremendously.”

Some camps have already announced they will not be operating this summer.

Pearce Williams, a camp in Fingal, Ont., decided in March that it would not be able to offer summer camp this year.

Registrations were too low and staff weren’t applying, two facts Mr. Richards attributes to the uncertainty of whether overnight camps will be permitted this year.

Mr. Richards said we are now at a time when most camps that still hope to operate this summer will likely not be able to do so given the logistical challenges of getting camp up and running.

“The runway is short if not potentially impossible,” he said.

The YMCA of Greater Toronto announced in late April it would not run overnight camps this summer, a decision many other YMCA camps have made in recent weeks.

“We really had to look at the current realities of the pandemic,” said Brandon McClounie, vice-president of camping and outdoor education at the YMCA of Greater Toronto.

It plans on expanding its day camp programming to help ensure kids have the opportunity to enjoy a camp experience, he said.

While the Quebec government announced last week that overnight camps can run in the province this summer, it has yet to provide details concerning what protocols and measures they will need to adopt.

The 112 overnight camps that are members of the association had told the organization they need to know by April 1 what the measures are, Ms. Joyce said.

Stuck in limbo, some have called it quits for this summer.

New Brunswick was the only province or territory that allowed overnight camps to run last summer.

If camps are forced to close for a second year in a row it will wreak havoc on the industry, Mr. Goodman said.

“Some of us will be able to weather the storm. It won’t be pretty. We’ll be in a very difficult spot. Other camps are on the edge and they’re teetering as we speak,” he said.

A survey conducted by the Canadian Camping Association found that 68 per cent of its member camps said they will have to file for bankruptcy by the end of the year if they cannot operate overnight camp this summer.

Ontario’s Ministry of Health said in a statement that, “The province continues to review the evidence and consult with the sector, public health experts, and local medical officers of health to determine if and when public health measures can be adjusted.”

Michael Budman, co-owner of Camp Tamakwa, in Huntsville, Ont., said he is frustrated by the government’s lack of direction.

The camp has hired a private company to test campers before and after arriving at camp to help ensure everyone’s healthy and safe.

“We’re dealing with children’s lives. We’ve already taken two years of their lives away from them,” Mr. Budman said. 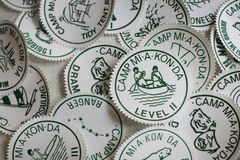