Two men who were found guilty of terrorism offences in a high-profile case argue there is no need to revisit an appeal court’s decision to order a new trial.

In newly filed legal submissions, Raed Jaser and Chiheb Esseghaier urge the Supreme Court of Canada to reject a federal application for a hearing on whether the lower court of appeal was right to overturn their convictions.

Mr. Jaser and Mr. Esseghaier were found guilty in 2015 of terror-related charges arising mainly from an alleged al-Qaeda-inspired plot to crash a Via Rail passenger train.

Both men appealed their convictions. Counsel for Mr. Jaser and a court-appointed lawyer for Mr. Esseghaier argued the jury that convicted them was improperly constituted.

In August last year, the Ontario Court of Appeal ordered a fresh trial for the men.

The appeal court said Mr. Jaser was improperly denied his preferred option for jury selection. It also said that if Mr. Jaser should have a new trial, Mr. Esseghaier was also entitled to one.

After the decision, the Public Prosecution Service of Canada said it would proceed with a new trial, but noted it had 60 days to decide whether to seek permission to appeal from the Supreme Court.

In a subsequent submission to the top court, federal lawyers noted Mr. Jaser and Mr. Esseghaier were convicted of the most serious terrorism offences in Canadian law after nearly nine months of pretrial motions and a three-month jury trial.

“Overturning these convictions on the basis of a technical error that had no appreciable effect on the conduct of the trial is a triumph of form over substance,” the submission said.

“Where, as here, there is no actual demonstrable prejudice to the fairness of the trial, the verdict properly reached by the trier of fact after a long and arduous trial should not so easily be set aside.”

The Supreme Court is expected to decide in the coming weeks whether to hear the case.

Both Mr. Esseghaier and Mr. Jaser say the court should dismiss the federal application and let their new trial go ahead.

“The Crown has failed to identify any error of law in the decision of the Court of Appeal, much less one that raises an issue of national importance,” Mr. Esseghaier’s submission says.

He takes issue with the suggestion the serious nature of the alleged offences should prompt the Supreme Court to grant leave to appeal.

“The Crown has not advanced any argument as to why only serious cases involving overturned convictions, as opposed to convictions that are upheld on appeal, are sufficient to satisfy its new proposed test for leave,” Mr. Esseghaier’s brief says.

“Profoundly serious cases are, sadly, not an uncommon occurrence in the Canadian criminal justice system.”

In his submission to the court, Mr. Jaser also rejects the notion that the gravity of the alleged offences would warrant a high court hearing.

“The seriousness of the allegations cannot transform an unimportant legal issue into an important one.” 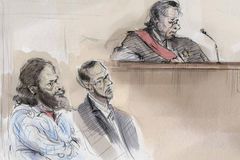