A teenager who was sexually assaulted in a locker room at St. Michael’s College School last fall has suffered emotionally and psychologically in the year since he was attacked, a court heard at his assailants’ sentencing hearing on Thursday.

In a victim-impact statement read out by prosecutor Erin McNamara, the boy’s parents explained that they had to write the statement on their son’s behalf, because the teen could not bring himself to relive the experience.

“This was not some minor hazing incident,” his parents wrote. And because he lives in fear of being “found out” as the victim of the high-profile case, the family has had to carry the burden alone.

“We all feel very helpless,” they wrote.

Three boys, now 16, have pleaded guilty to sexual assault with a weapon (a broom) in the attack, which took place in a locker room at the elite private school after a football game on Nov. 7, 2018. One of the boys, who filmed the assault on his cell phone, has also pleaded guilty to making child pornography.

The trio has pleaded guilty to assault with a weapon in a similar attack in the locker room a few weeks earlier. The victim in that case did not submit an impact statement on Thursday.

The St. Michael’s case, which came to light after the video of the attack was shared on social media, has garnered media attention across the country and resulted in the resignation of the school’s principal and president, as well as a review of culture at the all-boys school.

That culture – and the normalization of bullying and hazing – was mentioned repeatedly by the boys’ defence lawyers on Thursday as a relevant factor. But Ms. McNamara stressed that this case is not against the school.

“This is about specific people charged with specific things,” she said.

Four other students were also charged in this case. The charges against two were withdrawn. One is scheduled to go to trial alone early next year. The fourth entered a separate guilty plea this summer and was sentenced to two years on probation, although it is unclear what charges he faced.

Lawyers for the three teens who were in court on Thursday are seeking two years’ probation for their clients. The Crown has asked for custodial sentences; 10 to 12 months for one, and 12 to 15 months for the other two.

An aggravating factor, Ms. McNamara argued, is the video. It’s one thing to be so violently violated, she suggested. It’s another to know your attack was recorded and other people can see your humiliation.

“It’s never really over,” she said.

She also stressed that the assaults were committed by a group. Justice Brian Weagant, who is hearing the case, also questioned whether the events would have occurred at all if not for the “Lord of the Flies locker room.”

Although he acknowledged on Thursday that all three teens have demonstrated themselves through pre-sentence reports to be intelligent young men with good prospects for rehabilitation and a low risk to reoffend, he also stressed the importance of denunciation.

The boys will return to court to be sentenced on Dec. 19. In the meantime, the victim’s parents wrote in their statement that they will continue to pray for the families of the perpetrators: “We may be able to forgive them,” they wrote, “but we will never forget.” 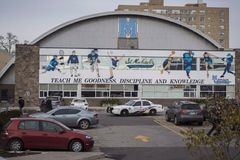