Parents and siblings of children with cancer can struggle with anxiety, stress and other mental-health issues long after the initial cancer diagnosis, according to a new study that found elevated rates of mental health-related doctor’s visits among family members up to 20 years later.

The study, published earlier this month in the Journal of Clinical Oncology, examined health data for 4,773 mothers and 7,897 siblings of children diagnosed with cancer between 1998 and 2014 in Ontario.

Moreover, these elevated rates persisted up to 20 years after the child was diagnosed with cancer. (The researchers were not able to extract data for fathers.)

“You go through a childhood cancer diagnosis in your family, and, of course, that’s going to affect your mental health. What was a little bit surprising to us is that the increased rate was seen quite a long time after the original diagnosis,” said senior author and oncologist Sumit Gupta, an associate scientist at the Hospital for Sick Children in Toronto and adjunct scientist at the non-profit Institute for Clinical Evaluative Sciences.

“Given these results, it does make you wonder, well, how are the fathers doing as well?” he said.

The findings suggest there is a need to ensure family members of pediatric cancer patients have access to mental-health resources over the long-term, said Gupta, who is also an associate professor in the department of pediatrics at the University of Toronto. Even though some hospitals currently offer support to families, he said, these family members’ contact with the hospitals tend to dwindle after their child’s treatment ends.

Gupta added there is also a need to research ways to intervene while the child is still receiving treatment, or shortly after treatment, to lower family members’ risk of experiencing mental-health issues later on.

The study, co-led by SickKids and ICES, used hospital data and birth records to identify the mothers and siblings of children diagnosed with cancer. The researchers then examined the number of outpatient visits – that is, visits to a psychiatrist or a family doctor for mental-health reasons – made after a child’s diagnosis by their mothers and siblings, compared with visits by corresponding controls from the general population. They also looked at the numbers of “severe psychiatric events,” defined as psychiatric emergency department visits, psychiatric hospitalizations and suicide.

The researchers found mothers and siblings did not have higher rates of severe psychiatric events. However, mothers had more mental-health outpatient visits, compared with the controls, at an elevated rate that remained constant over time (1,056 visits for every 1,000 person-years, versus 766 visits among controls). In siblings, the rates of these visits surpassed those of the controls, starting around 15 years after diagnosis (104 visits for every 1,000 person-years, versus 95). More than half of the outpatient visits by mothers and siblings were for anxiety disorders.

At the Montreal Children’s Hospital, pediatric psychiatrist Cécile Rousseau, who was not involved in the study, said even though siblings may not fully understand the situation, they can sense their parents’ anxiety, and this anxiety can be contagious. She encourages parents to give their children validation, by acknowledging that they are worried, that it’s not their children’s fault and that they love them.

“Telling kids, ‘no, no, everything is okay,’ a lot of parents in cancer situations do that, and I think this is very distressful because the kids know that something is not okay,” Rousseau said. “They feel it viscerally all the time, and they become distressed because of it.”

For Antonia Palmer, a mother of three in Mississauga, the study’s findings provide reassurance that she is not alone in continuing to struggle with her mental health, even though her child finished his cancer treatment years ago.

Palmer’s eldest son Nate Hudson, 12, was diagnosed at age 2 with stage 4, high-risk neuroblastoma, a solid tumour cancer. For five years, he underwent intensive, complex and painful treatments that saved his life, but have left him with long-term effects, including profound hearing loss.

Palmer said throughout his treatment, she tried to put on a brave face and often hid her fears, anger and frustration from her family.

“Once treatment ends, you have to deal with all those emotions. They all come back … in this huge flood,” she said, recalling she collapsed on the kitchen floor one day, crying and feeling powerless and overwhelmed.

Palmer said her husband, Aaron Hudson, experienced anxiety as well, and while their younger sons, Alex, 10, and Jonathan, 7, have developed a strong sense of empathy, they also experienced a lot of stress.

“I still have days that I struggle to get through,” Palmer said. “Even when treatment is done, it’s never gone. It’s never finished. You don’t close the chapter on pediatric cancer.”

Globe editorial: Give pediatric cancer sufferers the help they need
May 20, 2018 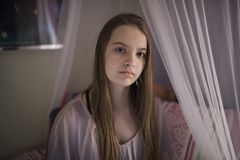