Most of the regulars at Ray’s Place Barber know the rules: You pay by cash, seniors get a discount and if it is campaign season and you want to know how Ray’s election poll is shaping up, casting a ballot is the only way to get the barber to loosen his tongue.

“You vote first, then I’ll tell you – I don’t want to influence anybody,” said Ray Martin, holding firm with an inquisitive customer last week. The islander has been barbering at his eponymous Kent St. shop for almost 50 years. For nearly as long, during elections, he has been setting up a makeshift voters’ booth that sits atop the glass case that holds moustache wax, Brylcreem and the bowl of Dubble Bubble.

Mr. Martin’s results, counted weekly, have been so consistently close to the final tally – usually within three percentage points – that the barber poll has become a bit of a bellwether.

Not in recent memory have islanders been so hungry for one.

There is less than one week to go before the provincial election, the most hotly anticipated in recent history for its potential to deliver a dramatic departure from traditional red-or-blue island politics.

For more than 50 years, political trends have seen the Liberals and the Progressive Conservatives trade turns in government after three consecutive terms each (with one exception in 1978 when the Liberals won a fourth term). But support for the governing Liberals, which have now had three consecutive terms, has long been waning. Green Party Leader Peter Bevan-Baker, however, has for two years polled as the most popular political leader on PEI. While the Green Party won just one seat in the legislature in 2015, a full slate of candidates running in this election has islanders wondering if the country’s first Green premier just might be elected here next week.

“In the past, it was always a two-party race and it was pretty clear what was going to happen,” said Peter McKenna, a political scientist at the University of Prince Edward Island. “In previous elections, nobody mentioned the Green Party. It wasn’t even on the radar screen. And now people are speaking about the Green Party in glowing terms? To me, that suggests something is going on,” he said.

Next Tuesday’s ballot will also include a question on electoral reform -- voters will be asked to decide whether the province should move from the traditional first-past-the-post voting system to mixed member proportional representation.

And there is the possibility that, for the first time since the 1800s, the island will end up with a minority government.

A poll of 539 voters conducted last week on behalf of The Guardian newspaper by Narrative Research showed the Green Party leading with 35-per-cent support. The results also indicated a true three-party race is under way. Close behind the Greens were the PCs, with 32-per-cent support, while the Liberals had 29 per cent. Eight per cent of respondents were undecided and the margin of error was 4.5 percentage points.

However, the paper-ballot poll at Ray’s Place, with 230 voters so far, showed last week that the Liberals remain slightly ahead. Week over week, though, the PCs have picked up steam while the Greens have made even steadier gains.

“Will that turn into seats? I don’t know,” Mr. Martin said last week, adding: “But I know islanders. We’re great to look you in the eye and tell you we’ll vote for you and then turn around and go the other way.”

If islanders decide to experiment with political change, they will do so with stability on several other fronts. PEI’s economy is booming thanks to some of the country’s strongest population growth and immigration. In March, the province’s employment, adjusted for seasonality, reached a historic high, according to figures published in a provincial government labour-force survey.

In spite of the fact that much of this was achieved under the leadership of Liberal Premier Wade MacLauchlan, the desire for new leadership is palpable.

“There has just been this sense that people don’t feel they’re being listened to and that decisions are being made at the top and … rammed through,” said Mr. McKenna, the political scientist. “People are so desperate for different. The appetite is just insatiable. They want someone who is going to do politics differently.”

A promise to do just that has been one of Mr. Bevan-Baker’s most-repeated doorstep phrases.

Canvassing in rural Crapaud last week, he listened to Shane Guitard’s disdain for what he called “the same old crap” in island politics.

“I haven’t voted for a couple of elections because I just didn’t know what to do,” Mr. Guitard said. “People vote Liberal because they’re tired of Conservative and then the reverse. It’s a vicious circle, the red and the blue. It’s always the same,” he told Mr. Bevan-Baker, who held open the screen door.

“Well, there is no reason we should produce the same crap,” Mr. Bevan-Baker said.

Mr. Guitard grinned and, with an upward turn of the thumb, agreed to give the Greens his vote.

“If there’s actually a potential for change, I’m all for it,” he said.

There was less certainty about going Green at an agricultural debate, where tension in the room rose noticeably when Mr. Bevan-Baker spoke about his desire to reduce carbon emissions and address climate change. His remarks on reducing farm inputs, mentions of the word “organic” and reducing reliance on exports and imports had attendees shifting uncomfortably in their chairs.

“It might appear in the media that Peter Bevan-Baker is out front, but he has some policies that are difficult to sell,” Tony Carrol of Charlottetown said. “I see him wedded to an ideology,” Mr. Carrol said. “Islanders are moderate. I don’t think people are ready to go down that path of extreme change.”

The moderate choice, Mr. Carrol said, just might be PC Leader Dennis King. Known locally as Denny, Mr. King is a former journalist and PC strategist whose first foray into politics resulted in his winning the leadership in February.

Many, including Mr. Carrol, have been pleasantly surprised at Mr. King’s moderate approach to the campaign. He has made popularity gains in the second half of the race, despite early criticism over inappropriate comments he made on Twitter before becoming party leader.

While building a profile as a comedian and storyteller, Mr. King published tweets that included references to “inbreeders,” and how he “used to get laid” at one island establishment.

He has apologized publicly for those comments regularly throughout the campaign.

Ed MacDonald, a historian at UPEI, said the small nature of the province means voters’ personal knowledge of candidates counts.

“Politics on PEI is very intimate,” Prof. MacDonald said. “A candidate who is personally well-liked … has a resonance."

Back in Crapaud, Mr. Bevan-Baker, a former dentist, found himself tending the chipped tooth of a local woman who stopped him on a driveway just after Trayce Guitard promised her vote, too, and bid the Green Leader good luck.

“An oyster only needs one grain of sand,” she said. 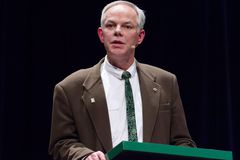 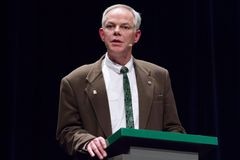