Can we build a new neighbourhood from scratch and make it good? This is an open question in urban planning right now – not just in Toronto or in Canada, but across the Western world. There are few examples of new districts that have become beloved places.

Now Toronto has the chance to answer that big question with a big project: The redevelopment of 520 acres on a former airstrip, Bombardier factory and military lands in Downsview, in a northern area of the city. This week, the developers Northcrest and Canada Lands Company will release a “framework plan” for the project. It promises a walkable urbanism full of parks and “green corridors” and a runway turned into a mile-long pedestrian street. It would be light on cars, great on managing stormwater, and full of Scandi-style mass timber buildings.

After a year of Zoom-meeting consultations, the vision that emerged is hugely ambitious, highly innovative and just as exciting. The question is how much of this dream will actually come true.

“This is a plan that puts nature first, and then people, and then the built form,” says Kevin Bridgman, a partner at local firm KPMB Architects, one of the groups leading the design. “It’s a very different result than you get if you start with buildings and density.”

The designers, which also include leading Danish firm Henning Larsen Architects and Danish landscape architects SLA, are pitching the project around a concept they dub “city-nature.” One hundred acres of new open space would slice through new neighbourhoods, creating small and mid-sized parks that carry rainwater, migrating species, cyclists and kids at play.

“For everybody in Toronto who needs to leave for the weekend and go to a cabin in the countryside, we ask: Can you get that feeling in the heart of the city?” SLA project director Rasmus Astrup says.

There also will be some buildings. The plan calls for 50,000 units of housing for 80,000 people – mostly in mid-rise structures, meeting or exceeding affordable-housing requirements, and clustered to create lively places. It also promises 41,500 jobs by 2051, including through a film production studio that will open in the next few years. Development would begin at opposite ends, clustered around the Wilson and Downsview Park subway stations – two of the four public-transit stations that serve this site. 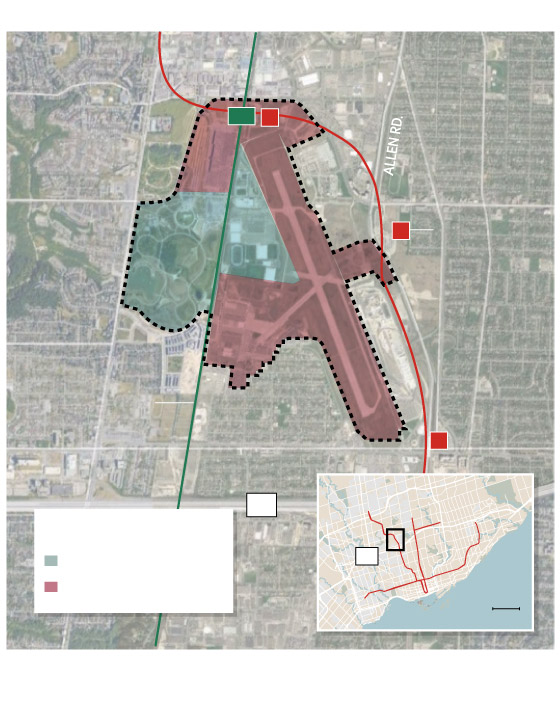 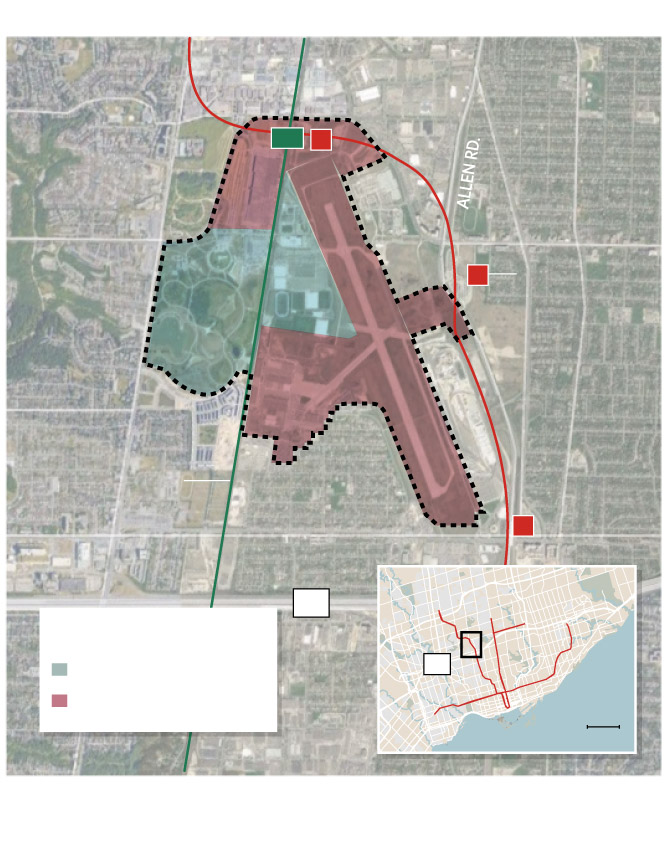 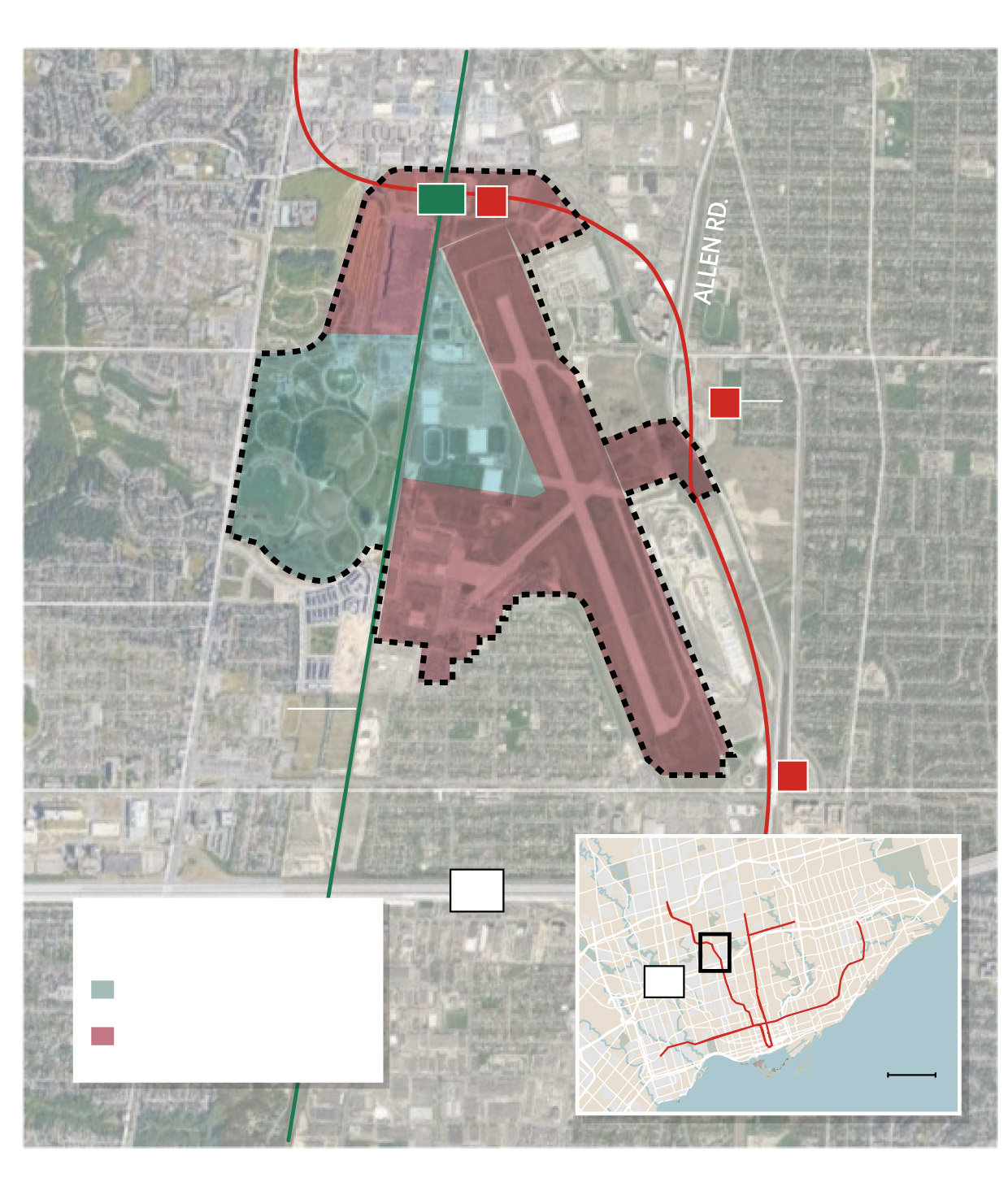 The architecture is still vague. But early drawings show mostly five- to eight-storey structures organized around lush courtyards, with hardly a car in sight. The architectural language, as one would expect from Henning Larsen and KPMB, is a quiet Modernism, with plenty of brick and hints of timber structures. (The low heights make it possible to use mass timber, an emerging carbon-light technology, rather than concrete.)

The airport runway provides a spatial and conceptual through-line for the project. The 2.1-kilometre runway would remain in place as a pedestrianized street, lined by housing, shops, daycares and a school. “The runway changes from connecting people on a global level to connecting people on a local level,” says Michael Sorensen, head of Henning Larsen’s North American office.

In the next year, the developers plan to open up the airport for public events, allowing people to connect to the place. That will be a milestone. The airport is a century old, but most neighbours have never gotten past the fences. “The site is unfathomably big,” Mr. Sorensen says. “As a Dane, coming from such a small country, it’s difficult to get your head around it.”

This little joke captures an important truth: The project is massive. So how do you create a sense of place? The “city-nature” concept, a trademark of SLA and a characteristic of Danish urbanism, helps. The plan will provide a network of courtyards and “greenways,” Mr. Astrup says – “that extra layer that every community needs.”

The designers also engaged with what is there. Downsview today is weird: a shaggy collection of aerospace factories and sheds, buttoned-up military buildings turned into parkour gyms, and oceanic parking lots. There’s a flea market, housed in an 18-acre military warehouse that was built to withstand a missile strike. Now the designers plan to cut that building open and run a street through it, connecting the samosa stands and electronics dealers to the landscape beyond.

The danger here is that these ideas will get diluted. The federal government conducted a design competition for Downsview in 2000 that produced an influential scheme led by Dutch provocateurs OMA. What got built is a generic park, grim townhouses and big-box stores.

Today, there’s a chance to start again. But it will require painstaking and creative work on the architecture and landscape. And the city of Toronto’s many departments will need to be flexible, abandoning much of their suburbanite formula for built form and street design.

The developers Northcrest, owned by a public-sector pension fund, are adamant that they’ll take their time and stand up for quality. Let’s hope so. If they aren’t, one change of ownership could bring disaster – a Danish-style public realm could be replaced by condo junkspace. For now, though, the dream is alive.