When he was a child, Byron Ruttan would wake up singing.

Then began a 40-year journey through the justice system, and his mornings went silent. At 12, he was in child-protection court, where a judge ordered him to accept a mentor – who went on to rape him, repeatedly. Decades later, after he finally spoke up to authorities, a jury convicted the mentor, but then the Supreme Court established new time limits for criminal proceedings and let the abuser walk free. Finally, his journey took him to the civil courts, as he filed a $2.85-million lawsuit against the Ontario government, now concluded.

Today, with his quest for justice behind him, he wakes singing once more.

It is always the same seven words from the heroic character Maui, in the animated Disney movie Moana. Maui was an abandoned child rescued by the gods. He became a protector of humankind, but felt he hadn’t been properly thanked.

“What can I say,” Mr. Ruttan sings, “except you’re welcome.”

Although no such rescue came for him when he was young and in his time of need, the 52-year-old now has a renewed lightness of heart.

“Some people who know me,” he says, “know I wasn’t this weird kid. There’s a reason why I acted the way I did, growing up and wanting to be alone just about all my life.”

He adds: “People understand me now.”

Neither he nor his lawyer, Simona Jellinek of Toronto, can make public how the civil lawsuit ended. Under a non-disclosure agreement, the parties are not permitted to discuss what, if anything, Mr. Ruttan received from the province. All she can say is “the case is over to the satisfaction of all parties.”

But it can be reported that he has heat in his apartment and food in the fridge. That the $40 cab ride each way to the nearest grocery store is no problem. That his youngest child, who is 12 and loves reading, can buy all the books he wants.

And that the man who now wakes singing has learned something about pain and anguish over the decades.

“Bottling it up,” he says, “is going to lead to the darkest part of your life.”

In the summer of 2017, Mr. Ruttan went to court and obtained permission for The Globe and Mail to use his name, so his story could be told. A truant who occasionally stole $5 from his mother’s purse, he found himself at 12 before a judge who ordered him to accept a mentor from the teachers’ college at Queen’s University in Kingston.

Mr. Ruttan was 42 before he told his probation officer what the mentor did to him. (Over the years, Mr. Ruttan committed crimes such as theft and assault and has done short stints in jail, though none since 2000.) The probation officer called police.

Mr. Ruttan’s silence was an issue at the 2011 trial of Kenneth Gavin Williamson, a former high-school teacher in Gananoque, Ont., who had been his mentor. Does it make any sense, asked defence lawyer Sean May, that he hadn’t cried out as he was being anally raped in a small dormitory room, where his cries might have been heard in other rooms? “No, it doesn’t,” Mr. Ruttan said.

Mr. May then suggested that Mr. Ruttan had fabricated the accusation because he was unhappy with his life. “You can suggest it all you want,” Mr. Ruttan replied, “but I know the truth.” A jury convicted Mr. Williamson, and a judge found as a fact that he had raped the then 12-year-old at least 50 times, and sentenced him to four years in prison.

But Mr. Ruttan’s abuser never spent more than a day or so in jail, because the Charter of Rights and Freedoms contains a right to a trial within a reasonable time, and because two bureaucratic errors had caused three-month delays, each at a time when a large, complex murder trial was taking up valuable resources in Kingston’s overburdened courts.

By a count of 6-3, the Supreme Court said that the roughly 33 months Mr. Williamson’s proceedings took, from the time he was charged until conviction, was too long. The new deadline set in the Jordan case, released the very same day as the Williamson ruling, was just 30 months for trials in superior courts, the level in which Mr. Williamson was tried. Mr. Ruttan was the first crime victim affected by the Jordan time limits.

That might have been the end of it, but a juror gave Mr. Ruttan the number of a local lawyer, who referred him to Ms. Jellinek. His lawsuit, filed in 2015, accused the province of negligence in the supervision and training of his mentor. The out-of-court resolution, which came in May, took four years – more than a year longer than Mr. Williamson’s criminal proceedings lasted. The province did not admit liability, Ms. Jellinek says.

The lawsuit’s satisfying conclusion was a close thing, just under the wire of a new law that, in the view of Ms. Jellinek and other personal-injury lawyers, gives Ontario immunity from negligence lawsuits like Mr. Ruttan’s. (He would have had to sue for breach of fiduciary duty, a trust obligation that is much more difficult to establish, Ms. Jellinek says.) His timing in the civil-justice system was better than it had been in the criminal courts – by a hair. The new law took effect on July 1.

“Byron felt he has been heard,” Ms. Jellinek says. “He’s a more whole man now than he was when he started this lawsuit. He’s gained something that is intangible.”

“Bottling it up is going to lead to the darkest part of your life.”

When The Globe visited Mr. Ruttan in 2017, he was living in a small, rented house in Verona, near Kingston, with his common-law wife of more than 15 years and three of his four children (a fifth child, who had cystic fibrosis, died at 25). He was living on Ontario disability payments. It was winter and the only heat on the main floor was from a tiny space heater. Mr. Ruttan wore an overcoat indoors.

Today, his life is changing in ways big and small, material and psychological.

Having split up with his spouse (before the lawsuit ended), he lives with his oldest son Bryon, 33, and their Rottweiler, Butch, in a tiny two-bedroom apartment in rural Centreville, near Napanee. The home is well-heated – a big change – and the tiny TV has been replaced by a 60-inch RCA, with a new, small TV monitor for his 12-year-old, who visits every weekend. (He doesn’t want his father to move, ever, “I think because we have heat,” Mr. Ruttan says.)

Splurging, Mr. Ruttan has bought framed paintings – of a wolf and a deer – for the wall. A brass, heart-shaped urn containing the ashes of his late son, Brandon, is on a table.

He dreams of better days. Maybe one day he will buy a house with a yard for Butch, he says. And a car for Bryon.

The main thing, Mr Ruttan says, is that he is able to help his children and grandchildren. “I get stuff for my kids now I never thought I’d be able to. Like stuff from Amazon.”

One day he would like to travel to Regina to visit a niece. And to Toronto, to watch his beloved Maple Leafs play hockey.

“I might go crazy on their gift store,” Mr. Ruttan says.

Bryon has felt the effects of the abuse Mr. Ruttan experienced. His father was always loving but used to be more remote, Bryon says.

“I’m a bit of a sociopath,” he says. “I have a lot of trouble feeling empathy for people. But what dad went through, it tears a special place in my heart.” Recently he wrote the Prime Minister and Justice Minister asking them to reinstate the charges against Mr. Williamson. By law, however, he cannot be charged again for the same events.

Bryon says he has seen his father’s ability to change and grow. When he was young, his father was not on medication. Once medicated, he was a “different dad” for his younger brothers, and they became, in contrast to himself, what he calls “the compassionate generation.”

“He went through quite a drastic change,” the son says of the father, “and it’s still going on. It’s pretty awesome to see him coming out of it.”

Mr. Ruttan acknowledges that he hasn’t always been easy to have around.

“That’s one thing I wanted to get out most: Don’t hide this because it’s not just hurting you, it’s hurting everyone around you.”

He is still bitter about the Supreme Court ruling that let Mr. Williamson off the hook. He may never have “closure,” but since his lawsuit concluded he says he has stopped drinking hard liquor and switched to light beer.

“You basically tried to drown the thoughts that were swimming around in your head,” Bryon says.

His doctor has told him he can reduce his dosage of anti-depressant and anti-psychotic medication, but Mr. Ruttan is not inclined to do so just yet. Not while he is singing in the mornings, content that he broke his silence.

“You’re going to go through hell, seeing a doctor and going to the police,” he says, and yet, “believe it or not, it’s going to make it a lot easier. It is true what people say: Talk about it and it will get easier. And it does.”

Perhaps the intangible gain for Mr. Ruttan is a feeling that others accept him now. After the lawsuit ended, he dreamed that he went to a Leafs game and, when a few players got hurt, the team invited him to play – which he did, though wearing boots, not skates. An injured man back in the game, despite his limitations. 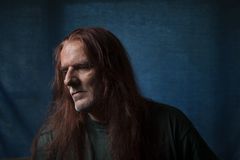