As Canadian authorities investigate 11 cases of vaping-related lung disease, clinicians across the country are scrambling to respond to the emerging health issue amid fears some cases are being missed.

There are four confirmed cases of vaping-related lung disease in Canada, according to the federal government’s website: three in Quebec and one in Ontario. As of Nov. 20, the site also says there are seven probable cases: two in New Brunswick, two in Ontario and three in B.C.

The illnesses are part of a wider outbreak of vaping-related lung disease that was first reported by the U.S. Centers for Disease Control and Prevention in the summer.

Since then, the CDC says 47 people have died and 2,290 have fallen sick as a result of what they are calling e-cigarette or vaping product use associated lung injury (EVALI). The majority of those sickened were vaping tetrahydrocannabinol (THC) and officials say vitamin E acetate, an additive, may be a potential cause.

In Canada, the federal government has advised anyone who vapes to seek medical attention if they develop a cough, shortness of breath or other symptoms. But across the country, front-line health professionals have been instructed by provincial authorities to only flag illnesses that meet the narrow case definition for EVALI.

One Alberta lung specialist, Dilini Vethanayagam, said she has seen three patients who experienced respiratory and other health problems after vaping.

But because their illnesses weren’t severe enough to meet the criteria for EVALI, Dr. Vethanayagam said there is no mechanism in place to track or follow them. She says she believes the actual scope of all vaping-related illness in Canada is higher than official reports suggest.

“What we’re seeing now is the tip of the iceberg,” said Dr. Vethanayagam, a respirologist based in Edmonton.

Caroline Asimakos, 18, is one of the two New Brunswick patients listed as a “probable" case. The first-year student at the University of New Brunswick in Saint John said authorities dismissed her symptoms on three hospital trips, even after she became quite ill and told health professionals she believed vaping was the cause.

Ms. Asimakos, who started vaping Juul e-cigarettes three years ago when she lived in Florida, said she began noticing heaviness in her chest and difficulty breathing in August. In mid-September, she went to the emergency room after a fit of coughing left her unable to breathe.

She told hospital staff she had been vaping regularly for a long period of time. But her X-rays came back clear and she was sent home after being told she likely had a cold. She returned a few days later, still sick, and left with a prescription for antibiotics.

By this time, Ms. Asimakos had stopped vaping, but the coughing, shortness of breath and the heaviness in her chest wouldn’t subside.

About a week later, in late September, Ms. Asimakos was in class when she started coughing again. She ran to a nearby bathroom and began coughing blood into a garbage can.

“I thought I was coughing up my lungs,” Ms. Asimakos said in a recent interview. “I couldn’t even breathe. It was the worst feeling ever.”

She contacted her parents and they all rushed to the hospital. Her mother brought research on vaping-related illnesses. But once again, Ms. Asimakos was told she had a minor cold and to go home.

It wasn’t until a friend of Ms. Asimakos posted about the ordeal on social media that health officials in New Brunswick connected Ms. Asimakos’s experience to the outbreak of vaping-related illness. Soon after, officials contacted Ms. Asimakos and, since then, she has been undergoing tests.

Dr. Russell said she and her provincial counterparts had a meeting in Montreal earlier this month and that part of the discussion focused on issues around vaping.

Ms. Asimakos said she only used Juul products purchased from retail stores. She worries about her long-term health. While she has stopped coughing up blood, she is now bringing up a white substance.

“I never in a million years thought that this would happen to me,” she said.

Lisa Hutniak, a spokeswoman for Juul Labs Canada, said in a statement the company “has not been contacted by health authorities and we are unaware of Juul products being linked to any reported health incidents.” The statement added that the “authenticity of the products referenced in this claim have not been confirmed.”

B.C.'s provincial health officer, Bonnie Henry, said EVALI is likely just one of many forms of illness linked to e-cigarettes.

“When you’re taking unknown substances into your lungs and breathing them in, it’s going to cause problems,” Dr. Henry said in an interview.

But the immediate focus remains on severe vaping-related lung disease and a potential cause, Dr. Henry said. She said more research is needed to look at the wider health risks of vaping, but that everyone should understand it can be dangerous.

“Inhaling toxic substances into your lungs is never a good thing,” she said. 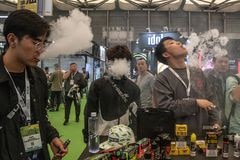 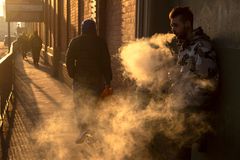 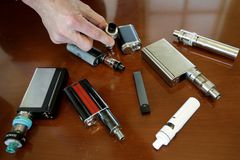