There is no good evidence that medication made from the plasma of paid donors is unsafe or that compensating donors undermines the voluntary blood-collection system, according to a federal expert panel that examined Canada’s approach to procuring a life-saving drug made from the blood component.

The long-awaited report stopped short of endorsing paid plasma – Health Canada instructed the panelists to synthesize the evidence, not make recommendations – but the report said that remunerating donors for their plasma may be necessary if Canada hopes to become less reliant on paid Americans for immune globulin.

Immune globulin (IG) is a plasma-derived medication used to treat a variety of diseases that compromise the body’s natural ability to fight infections.

Canada uses more IG per capita than any country except the United States, and domestic demand for the drug is growing by as much as 10 per cent a year.

Yet Canadian donations account for only 17 per cent of the raw material needed to meet this country’s demand for IG and other plasma-derived drugs. The rest comes from paid donors in the United States.

“Fundamentally, we could find no indication that the use of paid donors and commercial collection was causing harm,” said panel chair Penny Ballem, a University of British Columbia hematology specialist and former deputy minister of health for B.C. “In fact, Canada is very, very dependent on those [U.S.] operators to meet the needs of our patients.”

“Much of the cost-efficiency of the commercial source plasma sector stems from the very significant commitment of their qualified paid source plasma donors,” the report said. “Expecting this kind of commitment from volunteer donors is unrealistic based on experience to date and this speaks to the feasibility challenge of meeting aggressive source plasma collection targets using the volunteer donor sector.”

Opinion: Have we forgotten the lessons of the tainted blood scandal?

The expert panel’s report, released Wednesday, is the latest development in a long battle over paying for plasma that began more than five years ago when a for-profit company called Canadian Plasma Resources (CPR) announced its plans to set up a nationwide chain of plasma-collection centres.

Ontario, Alberta and, most recently, British Columbia all responded with laws banning payments for blood and blood products. (Quebec had already banned such payments.)

Saskatchewan and New Brunswick, meanwhile, each welcomed one of CPR’s paid plasma clinics.

CPR still hopes to open eight more clinics. The report revealed that Prometic Life Sciences Inc., which operates a small paid plasma operation in Winnipeg, would like to open as many as eight more paid plasma clinics of its own.

As the private plasma clinics began to gain a toehold, Canadian Blood Services (CBS), the organization that manages the country’s supply of fresh blood and plasma-derived medications outside of Quebec, began warning that plasma payments could lure donors away from the voluntary system.

We need to be able to guarantee a continued access of supply in Canada for our patients. We don’t believe that’s possible without compensation of some sort.

CBS proposed setting up 40 new plasma-collection centres with a goal of having unpaid Canadian volunteers provide the raw material for half of all the immune globulin needed in the country by 2024.

The Globe and Mail later revealed that CBS was seeking $855-million over seven years from its provincial and territorial funders to build and operate the centres.

The CBS plasma plan has been in limbo since last July, when the federal government asked a two-member expert panel, accompanied by two “special advisers,” to take a deeper look at the security and sustainability of Canada’s immune globulin supply.

In their report, the panelists agreed that “Canada needs to make a much more significant contribution to the collection of source plasma.”

At the very least, they said, the country should ensure that in the event of an international shortage there is enough IG available to treat patients with primary immunodeficiency, a congenital condition for which there is no alternative treatment.

However, the panel concluded there was no immediate threat of an IG shortfall.

The report said that improvements in quality control have made plasma-derived medications much safer today than they were 21 years ago, when Justice Horace Krever, in his report on Canada’s tainted-blood scandal, recommended against paying for blood and plasma.

“There have been no confirmed cases of disease transmitted through [plasma-derived products] in over [two] decades,” the report said.

As for undermining the voluntary blood-donation system, the panel acknowledged that more research is needed. But in the meantime, “there is no compelling data to suggest that expansion of source plasma collection − whether with paid or unpaid donors − has negatively impacted the whole blood supply."

One of the most vocal opponents of pay-for-plasma in Canada slammed the report as a thinly veiled justification for Health Canada’s decision to licence the two private clinics in Saskatoon and Moncton.

“It’s clearly a piece of political cover for Health Canada to defend an indefensible position,” said Kat Lanteigne, the executive director of BloodWatch, a group of tainted-blood survivors and safe-blood advocates.

Health Canada has said in the past that, as a regulator, its job is simply to ensure that plasma clinics are operating safely.

Ms. Lanteigne lambasted the report for seeming to ignore CBS’s warning that paying donors could siphon volunteers away from the public system.

For its part, CBS said in a statement that it “remains concerned about the issue of ‘crowding out’ from large-scale expansion of the commercial plasma sector in Canada.” The blood authority added that it supports the panel’s call for ongoing oversight of the issue.

Whitney Goulstone, the executive director of the Canadian Immunodeficiencies Patient Organization (CIPO,) said she was pleased that the panelists were open to tapping more unpaid and paid donors to increase domestic supply of IG.

Her organization supports both types of donations. “We need to be able to guarantee a continued access of supply in Canada for our patients,” said Ms. Goulstone, who takes IG for her primary immunodeficiency. “We don’t believe that’s possible without compensation of some sort.” (CIPO is funded by donations from individual members and two drug companies that make IG.)

Barzin Bahardoust, the chief executive of Canadian Plasma Resources, said he was not surprised that the expert panel found that paying for plasma is safe and does not appear to hurt the voluntary-collection system.

“These are just facts,” he said. 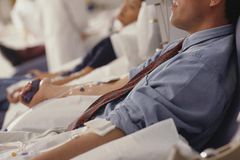 Ottawa approved for-profit plasma clinic despite warning from Canadian Blood Services
August 1, 2017
Follow Kelly Grant on Twitter @kellygrant1
Report an error Editorial code of conduct
Due to technical reasons, we have temporarily removed commenting from our articles. We hope to have this fixed soon. Thank you for your patience. If you are looking to give feedback on our new site, please send it along to feedback@globeandmail.com. If you want to write a letter to the editor, please forward to letters@globeandmail.com.
Comments