Climate activists with the Quebec chapter of Extinction Rebellion were arrested on Tuesday after they scaled the structure of Montreal’s Jacques Cartier Bridge, forcing authorities to close traffic as they mounted an operation to get them down.

Three activists climbed onto the bridge over the St. Lawrence River at about 6 a.m. and were up there for a few hours before surrendering without incident.

Quebec provincial police say two women, 32 and 40, and a 47-year-old man were arrested. They met with investigators and were released on a promise to appear in court on Oct. 24, where they could face charges of mischief and conspiracy, police said.

In a video from the bridge published on the group’s Facebook page, one of the climbers said she was there to protest government inaction on climate change and draw attention to the “war effort” needed to stave off a global environmental disaster.

“Today, we’re ready to take an action that seems extreme, but for us, it seems like a realistic action,” said the woman, who wore a harness and hard hat as she stood on the bridge’s structure.

The woman said the banner she carried read “We are 500,000” – a reference to attendance numbers given by the organizers of a recent Montreal climate march.

Police gradually had to block off lanes on the bridge before shutting it completely about 90 minutes after the protest began.

A specialized Montreal fire department unit climbed the structure to ensure the protesters’ safety and persuade them to come down.

In a statement, the group said its aim is to press governments to accept the climate crisis and make policy in line with existing scientific data.

The protest caused massive traffic snarls, as the span is a major link between Montreal and its suburbs to the south. Traffic was restored just after 8:30 a.m.

“There are other ways to protest, again, without preventing drivers from circulating on the different bridges and the road network,” he said.

Later Tuesday, images on local television showed members of the group gathered in a downtown square to highlight the first anniversary of a United Nations climate-change panel’s report on the impacts of global warming.

Several dozen protesters then moved into the centre of René-Lévesque Boulevard, where they remained into the evening as a line of police officers and vehicles blocked them from moving further.

On Monday, Extinction Rebellion members blocked bridges in Halifax, Toronto, Edmonton and Vancouver as part of a global effort to lobby for more urgent action against climate change.

Founded in Britain last year, Extinction Rebellion, also known as XR, now has chapters in some 50 countries. The group said the protests Monday were taking place in 60 cities worldwide.

Editor’s note: (Oct. 8, 2019) An earlier version of this story incorrectly said that two men and one woman were arrested. Quebec provincial police say it was two women and one man who were arrested and will meet with investigators. 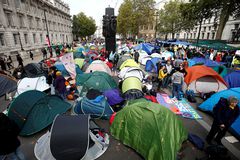 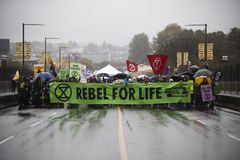 Activists block roads, march in cities around the world to demand action on climate change
October 7, 2019 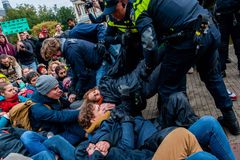