Ontario Premier Doug Ford’s government undermined the job security of “thousands” of police officers in the province when it stripped a top commander of his badge, according to wrongful dismissal filings obtained by The Globe and Mail.

Brad Blair, the former Ontario Provincial Police deputy commissioner, is making this allegation as he seeks reinstatement in the OPP through a grievance case. “If Mr. Blair can be terminated without any due process … then thousands of provincial police officers are now at risk of being summarily fired by bureaucrats for any reason,” his arguments read.

Almost a year ago, the Progressive Conservative government appointed Mr. Blair the acting head of the OPP. That job put him in charge of the force’s nearly 6,000 officers. But when he was passed over for the permanent role in favour of a friend of Mr. Ford, he launched an escalating series of legal actions.

The wrongful dismissal grievance has not been previously reported. While it challenges the government’s messaging that it is out to empower police, the Premier’s Office says the rank and file have nothing to fear.

“The Premier’s concern is, and always has been, protecting and supporting the front-line OPP officers who put their lives on the line every day to protect our communities,” said Ivana Yelich, a spokeswoman. “As the matter is before the Ontario Public Service Grievance Board, it would be inappropriate to comment further.”

Last November, a hiring panel struck by the newly elected government picked Toronto Police Superintendent Ron Taverner, who has long overseen the policing of the Premier’s riding, as the next OPP commissioner. The runner-up Mr. Blair, then still an OPP deputy commissioner, responded by alleging potential “cronyism” in a lawsuit seeking a formal review.

The political controversy died down only in early March when, within the span of a week, Mr. Blair was fired from the OPP, Supt. Taverner withdrew his application, and a new police chief was picked by the government.

The wrongful dismissal case highlights a tension that exists in the law. On one hand, the OPP’s most senior commanders get their command authority only from reversible political decrees that emanate from cabinet. Yet these same commanders never relinquish the legal rights they have as police officers to formal hearings that must be held before they can be disciplined – or fired.

A deputy minister hand-delivered the March 4 termination notice to Mr. Blair. The correspondence accused him of breaking the confidentiality oaths he was supposed to uphold under the laws that guide the civil service. Specifically, it alleged that Mr. Blair had wrongly backed up his court-filed complaints with sensitive OPP e-mails discussing Mr. Ford’s security and transportation arrangements.

On March 6, Mr. Blair’s lawyer, Julian Falconer, wrote the government to say that, at the utmost, it could have tried to demote Mr. Blair, but it had zero authority to oust him from the OPP because “absolutely no process has been initiated or completed pursuant to the Police Services Act, Brad Blair remains a sworn police officer,” he wrote.

On March 8, government lawyer Victoria Yankou later retorted that “there is no merit whatsoever to your claim” and pointed out cabinet itself had pulled Mr. Blair’s command authority.

On May 1, the dispute landed at the Ontario Public Service Grievance Board. The adjudicative tribunal tries to mediate complaints but holds hearings when it cannot. No such dates have been set and the government has yet to enter its defence filings. 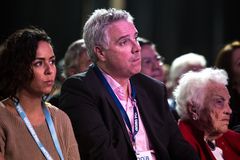 How Doug Ford spends his days as Ontario’s Premier
June 7, 2019 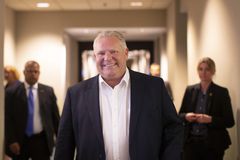 Follow Colin Freeze and Jeff Gray on Twitter @colinfreeze @jeffreybgray
Report an error Editorial code of conduct
Due to technical reasons, we have temporarily removed commenting from our articles. We hope to have this fixed soon. Thank you for your patience. If you are looking to give feedback on our new site, please send it along to feedback@globeandmail.com. If you want to write a letter to the editor, please forward to letters@globeandmail.com.
Comments are closed