The activities of police officers at the Richard Oland murder scene will be under close scrutiny as his son’s retrial moves into its second week, resuming Tuesday.

Dennis Oland’s defence lawyers describe the conduct of the murder investigation by the Saint John Police Force as “inadequate” and they have made it clear police activities will be a focal point of the defence strategy.

Failure to properly preserve the crime scene and a rush to judgment in deciding Dennis Oland, a financial planner, was the one and only suspect in the killing are among the chief issues.

“In this case, an issue will be the manner in which the Saint John police force handled the investigation of the homicide and their conduct in performing that crucial police function,” defence lawyer Alan Gold told the court last week.

“Dennis was the last known person to see Richard Oland alive but to the police, that word ‘known’ evaporated very quickly.”

Within hours of Richard Oland’s body being discovered on July 7, 2011, Dennis was identified by police as their prime suspect.

On Monday, the Oland family urged the New Brunswick Police Commission to move forward with its inquiry into the police murder probe, which was put on hold pending the outcome of Oland’s legal case.

“We are confident that findings from such an inquiry will support the conclusions that the investigation was filled with missteps and Dennis should never have been charged,” they said in the statement.

“There is a significant public interest in investigating the deficiencies in the Saint John Police Force as soon as possible so that these deficiencies can be remedied.”

Already two police officers have told Oland’s trial about the numerous officers who visited the murder scene. About 20 police officers made their way to Oland’s uptown Saint John office on the day his beaten body was discovered on the floor by his desk.

Gold suggested during cross examination of Const. Duane Squires it was like a sightseeing tour. In addition to the steady stream of police officers, there were also paramedics, the coroner and funeral home workers who assisted with removal of the body.

The defence is raising questions about objects that may have been moved at the crime scene, the lack of attention paid to a possible back door escape route and the failure to protect the scene from contamination.

Gold named a number of the officers who visited the bloody scene that day, noting their various ranks. They included Deputy Chief Glen McCloskey, whose attendance at the crime scene raised questions during Oland’s first trial.

Another officer said McCloskey suggested he not tell the court about McCloskey’s visits to the murder scene.

This was supposed to be the subject of a hearing before the provincial police commission, but McCloskey retired before it could be held. The commission only investigates officers on active duty.

In the coming days, there will be questions about police use of a bathroom at the crime scene before it was forensically tested.

Squires said he was relatively new to police work and homicide investigations in 2011. He said he would do things differently today in terms of protecting such a scene.

Oland, 50, was charged in 2013 with the second-degree murder of his father, a multi-millionaire businessman and member of the prominent Maritime beer-brewing family. He was found guilty after a 2015 jury trial, but the conviction was set aside on appeal and a new trial ordered.

Even before testimony began at the retrial, the conduct of the Saint John police was called into question after it was learned an officer accessed an internal police database to search the background of prospective jurors. This was in violation of a 2012 directive from the Supreme Court of Canada and resulted in a mistrial and dismissal of the jury.

The Oland trial now is being heard before judge alone.

The police commission says it will investigate police involvement in the mistrial, but not until the current trial is over.

The Olands said Monday the commission has “no principled reason” to hold back a probe now, since there is no longer a jury to prejudice.

“Our certainty that the investigation into Dick Oland’s murder was flawed, incomplete, and most certainly tarnished by the actions of the Saint John Police Force, remains unchanged. Dennis Oland is innocent of Dick’s murder. We have never wavered in this belief,” the family said in the statement. 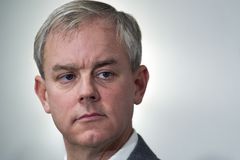 No obvious tension between Dennis Oland and father before murder, assistant testifies
November 22, 2018 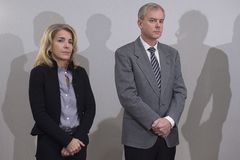