It was an exuberant group of French travellers who set off from Christine Reis’s inn north of La Tuque, Que., on Tuesday morning, eager for the second day of a multiday snowmobile trip around the province’s picturesque Lac-Saint-Jean.

The eight tourists and their guide had arrived Monday evening, undaunted after a full day of riding from their departure point in Saint-Michel-des-Saints, a 90-minute drive north of Montreal. While many tourists are wearied by the strenuous journey, Ms. Reis said this group of friends seemed in shape and eager to continue their journey.

“They were very happy. It was their first day, and they were happy to tell [us] they were going to go all around the Lac-Saint-Jean and go to Monts-Valin, a choice destination because there’s a lot of snowfall,” she said in a phone interview.

They had an experienced guide, Benoît L’Espérance, whom she described as a “kind, conscientious” person with years of experience who brought groups there a few times a year.

Tuesday, however, would end in disaster.

For reasons that remain unclear, the group left the safety of the marked trail through the woods and ventured toward the icy expanse of Lac-Saint-Jean. Between St-Henri-de-Taillon and Alma, the ice gave way, leaving Mr. L’Espérance dead and five others missing after plunging into the frigid waters. Three others made it to safety.

On Thursday, the second day of a massive search effort, snowmobilers, ice-rescue specialists, a drone and provincial police investigators scanned the area where the snowmobiles disappeared, about 200 kilometres north of Quebec City.

For the families of the missing French snowmobilers – identified by police as Gilles Claude, 58, Yan Thierry and Jean-René Dumoulin, both 24, Julien Benoit, 34, and Arnaud Antoine, 25 – it was an agonizing wait for news.

Claude Abel, mayor of Sainte-Marie-aux-Mines in northeastern France near the German border, said he knows two of the five missing tourists. He said the whole region was upset and doing its best to support the families.

“All we can do in this situation of waiting and worry is to bring a little support to the family and loved ones,” he said in a phone interview.

Mr. Abel said the two men in their 20s or 30s were motorsport enthusiasts and experienced snowmobilers who had been to Canada before.

“They were young people full of plans, who loved life,” he said in a phone interview.

Meanwhile, French biathlete Fabien Claude, who is the son of missing man Gilles Claude, dedicated his first podium finish, a bronze Thursday in the World Cup event in Pokljuka, Slovenia, to his father following the “tragic accident in Canada.”

The athlete and his two brothers, fellow biathletes Emilien and Florent Claude, posted the same photo to their Twitter accounts, with a caption that read: “A special day, and a star that will be with us all our lives. We love you, Papa.”

For Mr. L’Espérance’s family and friends, shock was giving way to sorrow. The 42-year-old Montreal-based guide died in hospital Tuesday night after searchers found him several hours after the accident.

Riel Langlais Harvey, a friend and former snowmobile guide, described Mr. L’Espérance as a calm and funny man, a joker and father, who loved Quebec’s wilderness and sharing it with others.

Above all, he was an experienced guide with over 15 years experience who had taken a number of safety courses at the company the two of them formerly worked for, his former colleague said.

He said his friend knew the Lac-Saint-Jean region well and had been there often, even if he didn’t live there.

“For sure he did not voluntarily go towards the water,” he said. “Because we all know that this area, at a certain point, doesn’t freeze.”

While he doesn’t know what happened, Mr. Langlais Harvey said conditions constantly change on the trail, meaning guides have to make split-second decisions on where to go, whether to turn back and how to meet clients’ requests while keeping them safe.

“We make the best decision based on what we think in the moment, and if it’s good or bad, we have to live with it,” he said.

The search effort on Thursday involved police and Canadian Forces helicopters surveying the area from the air and a side-scan sonar providing images of the bottom of the lake. Police divers used underwater propulsion to cover a larger area, and 30 police officers were pursuing searches on the ground.

Six snowmobiles were located under the water by divers Wednesday and Thursday, but there was no sign of the snowmobilers as of late Thursday.

In the days following the accident, questions have swirled about why the group would have veered so far off the marked trail in an area that is known to be dangerous because of thin ice and swift currents.

On Thursday, Tourism Minister Caroline Proulx announced the Quebec government would require guides and tourists who use off-road vehicles to follow a training course.

She said ecotourism companies would have to complete an accreditation process with the province in order to be eligible for funding. 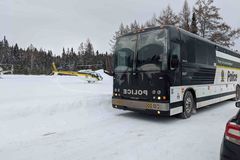