Prime Minister Justin Trudeau is holding cabinet meetings by phone and talking to G7 leaders by video, with occasional breaks for Star Wars-themed Lego and to give his youngest son a bath.

Toronto City Councillor Josh Matlow planned to re-propose to his wife when he got out of the basement, while Mayor John Tory hasn’t put on shoes in days – or seen another human being in person, for that matter. Alberta’s chief medical officer of health, Dr. Deena Hinshaw, helped to run the province’s emergency operations centre from a spare room in her home. And Prince Edward Island Premier Dennis King is getting used to the three dogs barking during his Skype calls.

As Canadians grapple with the new reality of social distancing in the age of COVID-19, political leaders and public officials across the country are experiencing self-isolation firsthand. From conference calls to makeshift living-room television studios, public figures are learning to lead from isolation, incorporating technology and creativity into their daily schedules.

And as the public-health crisis unfolds, those schedules are more hectic than ever.

“Fortunately, I’ve been kept very busy, so I haven’t got to feeling lonely," said Mr. Tory, speaking by Skype from his downtown Toronto condominium.

“I haven’t had any real sense of being alone until I thought about it. That I literally had not seen another human being.”

The Toronto mayor – whose schedule is now packed with early-morning TV interviews, briefings and “endless phone calls" – has been self-isolating since March 13, after returning from a business trip to London two days earlier.

Although he hasn’t experienced any symptoms associated with COVID-19, such as cough or fever, he said he would follow the advice of public health officials and self-isolate until at least next Wednesday, marking two weeks since returning from Europe. His wife left the condo to stay with family, leaving Mr. Tory alone with his iPad.

He hasn’t even gone outside, believing it’s too risky to take the elevator or walk the streets of downtown Toronto, where people may want to have a word with him.

“I didn’t want to be in a position where I’m having to go, ‘No, don’t come near me!’" Mr. Tory said. “I’m a person that thrives on, and loves, being out and listening to people."

Mr. Trudeau has been in self-isolation at Rideau Cottage, his 22-room house on the grounds of the Governor-General’s residence, since March 12, when his wife, Sophie Gregoire, Trudeau tested positive for COVID-19 after returning from London.

His three children are also at home, meaning the Prime Minister is balancing his official duties with his fatherly ones, more so than usual.

“He’s got to step in and do a lot of the child care now. … I think that that would probably be pretty special for him," Ben Chin, a senior adviser in the Prime Minister’s Office, said.

"It’s a huge relief to him that at least so far Sophie’s symptoms have been mild and the kids are alright, and he’s alright.”

While he can’t mark up his speeches the way he used to, Mr. Trudeau is adjusting to working remotely, aides say. He often participates in government conference calls while he’s on the road and the Prime Minister’s Office already uses a switchboard to patch in world leaders or premiers on one line. While doing TV interviews last week, Mr. Trudeau applied his own microphone after camera crews dropped it off on his front step.

An avid fan of the outdoors, Mr. Trudeau is getting outside at least once a day to speak with reporters during media briefings. On a particularly brisk morning last week, he paused questions to run inside and get his coat.

“It was one of those human moments," said Immigration Minister Marco Mendicino, who has been participating in cabinet’s special COVID-19 committee. "I can certainly imagine that at the end of the isolation period, there will be a sigh of relief.”

In Alberta, the face of the province’s medical response to COVID-19 – Dr. Hinshaw – went into self-isolation for a day last week after waking up with a sore throat. She ran her daily briefing by video conference from a spare room in her home.

“I have been telling people for weeks now that if they feel ill, even with slight cold symptoms, that they need to stay home and not put others at risk,” Dr. Hinshaw said.

"I thought, I can’t give people this advice and not follow it myself.”

She said it was senior leadership that decided she should be tested, due to her role in the health care system. The test came back negative and she returned to work the next day. “I was relieved," she said.

Mr. King, the PEI Premier, has been in self-isolation since March 13, after travelling to Boston with his family. He was in the United States for less than 24 hours, but felt it was important to comply. "How could I ask Islanders to follow the advice of the chief public health officer if I didn’t take it seriously myself?” he said. He showers and gets ready for work each morning – although his commute is shorter – and stays in touch by e-mail, calls and texts, including a conference call with Deputy Minister Chrystia Freeland about the U.S. border closure. “We’ve been developing, as premiers, a really strong relationship with Deputy Prime Minister Freeland,” he said.

For Mr. Matlow, who entered self-isolation on March 9, time apart from his family was the most difficult. After coming into contact with someone at a conference who tested positive for COVID-19, he decided to stay in his basement until 14 days had passed. He spent his days dealing with constituency issues by phone, as well as regular FaceTime calls and dance parties with his seven-year-old daughter, Molly.

His family was supposed to travel to Florida over March Break, the site of his marriage proposal 10 years ago. He had planned to re-propose to his wife, who lost her wedding ring a couple of years ago.

And so, when he emerged from the basement on Friday, he did just that.

She decided to stick with him. 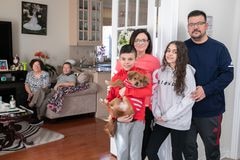 Canada at home: Scenes of social distancing and self-sacrifice to stay safe from coronavirus
March 20, 2020 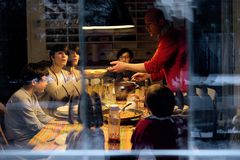