Liberal Leader Philippe Couillard has removed a possible major stumbling block in his bid for a second mandate, announcing Friday his unpopular heath minister won’t return to the crucial portfolio if the party is re-elected.

Couillard unveiled Gertrude Bourdon as the Liberal candidate in a Quebec City-area riding, tapping the health-care administrator as his future health minister.

She would replace Gaetan Barrette, the controversial outgoing minister whose tough-love approach to reforms over the past four years has been roundly criticized and who appears unpopular in polling.

Barrette would become the next treasury board president should he and the party be re-elected, Couillard said.

The Liberal leader paid tribute to Barrette’s accomplishments under difficult circumstances in a portfolio that accounts for around one-half of Quebec spending.

Quebec hasn’t had a female health minister since Pauline Marois in 2001, while all of them have been doctors dating back to Couillard’s appointment to the post in 2003.

“In 2018, it’s time for a new era, a new perspective,” the Liberal leader said on Day 2 of the provincial election campaign.

Bourdon said she had discussions with the rival Coalition Avenir Quebec before spurning the front-running party to join the Liberals.

“When you have to make such an important decision in life — because this was the most important decision of my life — there was only one party that reflected my values,” she said in the riding of Jean-Lesage alongside Couillard, Barrette and other Liberal candidates.

McCann admitted the jump was quick — she met with Legault on Monday and agreed to run Tuesday. That said, she doesn’t consider herself second banana.

“I feel like I’m the first choice of Mr. Legault,” McCann said.

Parties wasted little time pitching promises to voters Friday, with families and seniors among those targeted.

Couillard said families with children under the age of 18 will get an extra $150 to $300 — per child, per year and tax-free — depending on income.

He also wants to introduce other measures designed to improve the work-life balance for families, including 2,000 more subsidized daycare spots to be opened in educational institutions and companies.

Quebec families, he noted, have access to the most generous social programs in the country but often have to scramble around and are strapped for time. The estimated overall cost of the measures is about $380 million.

“In our next term, a Liberal government will offer more time to families, more facility in order to balance work, life and studies because we have young parents in universities and cegeps (junior colleges) who need attention,” Couillard said.

Meanwhile, the Coalition pledged to do away with the province’s long-term care facilities to replace them with more modern seniors’ homes with better amenities — a 20-year project it says will involve an initial investment of $1 billion.

Legault described the plan to replace the care facilities as a generational one that will take until 2038 to complete.

The new homes would include between 70 and 130 units, while at least 30 new facilities would be built from scratch following consultation with users, staff and architects.

The Coalition estimates the first phase would cost $1 billion in fixed assets and an additional $245 million a year in operating expenses. A Coalition government would not build any more of the long-term care facilities, known colloquially in Quebec as CHSLDs.

“I think it’s very realistic,” Legault said. “We owe that to our seniors.”

The Parti Quebecois, meanwhile, proposed Friday that parents be given a choice when it comes to school supplies by asking schools to offer them the option of buying notebooks, pencils and binders for them.

PQ Leader Jean-Francois Lisee says the option would give parents the choice of signing up for the package or taking the $100 currently given by the province and buying their own supplies.

On Thursday, the sovereigntist party’s Twitter account posted a reply to a question about language and said, “English is an official language of Quebec and Canada,” which isn’t the case in Quebec.

On Friday, party co-spokesperson Gabriel Nadeau-Dubois sought to rectify the matter, stating clearly that French is the only official language in Quebec, as prescribed by the law.

“This is strictly a mistake,” he said, blaming the confusion on a social media intern and fellow co-spokesperson Manon Masse’s own difficulties in attempting to explain the mistake Thursday in English.

That didn’t stop the PQ from seizing on the gaffe and casting itself as the only party that is defending the French language.

Lisee said English is “an important language,” “of our main minority” and that Quebecers want to learn it, but “it is not an official language.” 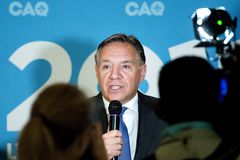 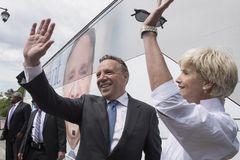 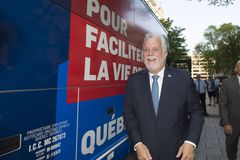