Ontario Premier Doug Ford is vowing to increase funding for police again, even as social justice critics call for cuts.

“You know, and everyone knows, I absolutely love our police officers,” Mr. Ford said Thursday during a press conference at the Ontario Provincial Police headquarters in Orillia, where he announced $25-million in new funding for 200 additional officers.

The OPP, Canada’s second-largest police force behind the national RCMP, has lately been grappling with several officer suicides. In March, an independent panel released a report finding that the organization has a “negative workplace culture” where staff shortages and work-related stresses are combining to create “unprecedented” numbers of officers on leave.

In recruiting the new officers, the Progressive Conservative government is hoping to address some of the OPP’s problems.

But elsewhere in Canada, cuts to police budgets are being debated. This summer, Edmonton City Council agreed in principle to $11-million in police budget reductions. Halifax also scrapped the purchase of a $300,000 armoured vehicle for police.

The reductions are fallout from this summer’s Black Lives Matter protests across North America. Critics outraged by civilian deaths at the hands of police have been calling upon politicians to “defund” police forces, reduce budgets and redirect the money to other professionals who may be better able to de-escalate conflicts.

Ontario’s Opposition NDP responded to the funding announcement by saying the Premier is out of step with the times and also with messages from Black, Indigenous and racialized communities.

“We are disappointed that the Ford government’s announcement did not consider or address the vital reforms,” NDP critic Kevin Yarde said in a statement. He added the Ontario government needs to address “the chronic underfunding” of mental-health professionals and social workers.

Mr. Ford, who represents a riding in northwest Toronto, has long supported the police rank and file.

Immediately after taking power in 2018, his PC government made it a priority to send millions of dollars in additional funding to the Toronto Police Service. Months later, it passed a sweeping package of reforms known as “the COPS Act” that reversed previous Liberal police-accountability legislation.

During Thursday’s announcement, Mr. Ford spoke about the OPP’s first Black officer, who joined in 1960.

“John [Wright] is one of the many men and women in uniform who pursued a higher calling to serve their community,” the Premier said. With that, he swept his arm across the span of the dozen OPP officers standing behind him. “Look at these champions all along here. Absolutely incredible,” he said.

OPP Commissioner Thomas Carrique introduced the Premier prior to his remarks. “This announcement is another step forward in our collective efforts to support our people, enabling the OPP to deliver our mission of safe communities and a secure Ontario,” he said.

In 2018, the OPP reported it had a budget of nearly $1.2-billion, of which 85 per cent is directed to salaries and benefits of its employees – including nearly 6,000 uniformed officers.

Last year, Statistics Canada released a report saying that across Canada that same year, “the highest average police officer salary was reported by the OPP at $102,821, followed closely by large municipal police services that serve a population of 100,000 or more.” 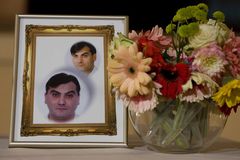