Premier Doug Ford declared Tuesday that his family friend Ron Taverner will be the “best commissioner the OPP has ever seen” even as a review of the appointment gets under way.

Amid allegations of political interference in the appointment, Mr. Ford told reporters he last spoke with Toronto Police Superintendent Taverner “probably last week,” and defended his government’s decision to name the 72-year-old mid-level commander to the post last month.

Supt. Taverner, who was to start the job on Monday, put his swearing-in on hold and asked for his resignation from the Toronto force to be rescinded until the Integrity Commissioner’s review of whether Mr. Ford had a conflict in the matter is complete.

“We look forward to having Ron Taverner as the commissioner of the OPP,” Mr. Ford said on Tuesday. “This guy’s given his life to policing. Let the review take place and I can tell you one thing, once it gets done, he will be the best commissioner the OPP has ever seen.”

Toronto Police spokeswoman Meaghan Gray told The Globe and Mail on Tuesday that any member who has left the service and wants to be hired can apply in writing to the police chief. When asked why Toronto police chief Mark Saunders approved the request, Ms. Gray said she would not have another chance to speak with him on Tuesday. “I’m not certain there’s a more elaborate answer other than it’s his prerogative to do so,” she said.

Mr. Ford said he gives Supt. Taverner credit for delaying his appointment. Supt. Taverner, a 51-year veteran of Toronto police, returned on Monday to his job as a unit commander of three divisions in the city’s northwest. “He’s not going to sit around for four to six weeks or how ever long a review is going to take, doing nothing,” Mr. Ford said.

Mr. Ford also made his first public comments on Tuesday about a bid by OPP Deputy Commissioner Blair, who had also sought the commissioner’s job, to get the provincial Ombudsman to investigate the appointment process. The Premier accused the high-ranking officer of breaking the Police Services Act when he publicly complained about Supt. Taverner’s appointment in a letter to the Ombudsman.

“I could give you a list of all the police act [provisions] that [were] broken throughout that whole letter, but none of you want to report on that,” Mr. Ford said. “I’m going to take the high road and I’m going to let the review go through.”

Mr. Ford’s office did not immediately elaborate on which sections of the act he meant.

Deputy Commissioner Blair, who was until Monday the interim leader of the OPP, argues in his legal application that the Ombudsman has a duty to review any potential “inappropriate political interference or cronyism” that could have factored into the government’s decision to hire Supt. Taverner. Deputy Commissioner Blair’s lawyer said the Ombudsman has a much broader purview and powers to probe the matter than the Integrity Commissioner, who is looking into whether Mr. Ford was in a conflict of interest in the OPP matter.

In the letter released last week, Deputy Commissioner Blair alleges Mr. Ford’s chief of staff, Dean French, asked the OPP to buy a “large camper type vehicle” and have it modified to specifications from the Premier’s office, and that it be kept “off the books.”

Mr. Ford said on Tuesday the allegations are false. “That’s just a baseless claim without merit. It’s just not accurate whatsoever,” he said.

“I asked … if they had a used one,” he said, without explaining why he would need a used van.

Mr. Ford also suggested Deputy Commissioner Blair was unhappy about being passed over for the top job, and accused him of submitting his retirement papers and then pulling them back. However, after the officer’s lawyer called it a falsehood, the Premier’s office later said Mr. Ford misspoke.

“I get it that he’s upset that he didn’t win a fair process. I understand. Did he step over the line on a lot of things? I’m going to let the media decide that and I wish you would look into that,” Mr. Ford said.

Deputy Commissioner Blair’s lawyer said his client never tried to retire and accused the Premier of trying to intimidate him.

“A simple inquiry of the OPP would bear out that Deputy Commissioner Blair has never, and I repeat never, submitted retirement papers. This is simply a falsehood," Julian Falconer said in a statement.

"As for the personal shots by the Premier, no amount of intimidation or insult will deter the Deputy Commissioner from seeking a full airing of these issues.”

“The investigation into Doug Ford’s interference in Ontario’s police force, and the attempt to install an insider as commissioner, can’t only happen behind closed doors,” she said in a statement. A spokeswoman for Integrity Commissioner David Wake said the office would not make any public comments, but a report will be filed with the Speaker of the Legislature and online. 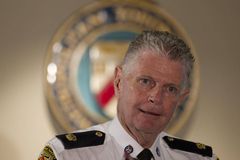