Prosecutors are asking a judge to put Bruce McArthur behind bars, without a chance for parole, until he is 116 years old – two consecutive life sentences for the eight first-degree murders he committed over almost a decade.

“The certainty that Mr. McArthur will never leave prison is a fit result,” assistant Crown attorney Craig Harper told the Superior Court of Justice on Tuesday, arguing that the crimes were particularly heinous because he preyed on the vulnerable. The term serial killer, Mr. Harper said, was “woefully inadequate” to describe Mr. McArthur’s moral blameworthiness. “He tore these men away from family and friends. He spread fear in a community that, regardless of its multiple strengths, struggles with a tenuous sense of safety.”

Mr. McArthur declined a chance to address the courtroom. “I’ve spoken with my counsel and I don’t want to say anything,” he said when asked on Tuesday.

His defence lawyer argued for all eight sentences to be served concurrently.

“The practical reality is that Mr. McArthur’s release on parole is highly unlikely," James Miglin said, adding that his client is already 67 and entered a guilty plea that spared the families of the victims a brutal, months-long trial.

Friends and family of the eight murdered men took to the witness box to speak of the heavy toll Mr. McArthur’s crimes have taken. Mr. Faizi’s widow, Kareema, described working 16- to 18-hour days to support their two daughters. “They pretend to be strong in front of me,” she said in a statement read by a prosecutor. When her daughters are alone, though, they bring photos of their father to their rooms and weep.

Mr. Kanagaratnam’s sister Kirushnaveny Yasotharan said she didn’t want to live in a world that had become “so terribly cruel.”

Mr. Mahmudi’s widow, Fareena Marzook, sobbed as her statement was read out, detailing “the trauma and grief of losing my soulmate.” She said she is terrified that Mr. McArthur will one day be released, recognize her family from the hearings and kill them. (One of the Crown’s arguments for consecutive sentences was to avoid family members facing Mr. McArthur at a parole hearing one day.)

Deciding if Mr. McArthur’s sentences will be served consecutively or concurrently is the task of Justice John McMahon. The minimum sentence for one count is a life term with no chance at parole before 25 years. Justice McMahon expects to deliver a sentence on Friday. He confirmed that a previously suspended assault conviction for Mr. McArthur – who attacked a sex worker with a lead pipe in 2001 – would be considered.

Mr. Harper brought up Elizabeth Wettlaufer, an Ontario nurse who killed eight elderly patients. Ms. Wettlaufer elected to confess to her crimes, he told the court, while Mr. McArthur continued to lie to police in order to conceal his crimes even after his arrest in January, 2018.

Mr. Miglin argued that his client’s life expectancy is already well below the threshold set by concurrent sentences, which would allow him to apply for parole at 91. “These offences are horrific,” he said. “It calls for the most serious penalties and sanctions available in our law.” Still, he argued, consecutive life sentences would be “unduly harsh” considering his client’s age and plea. 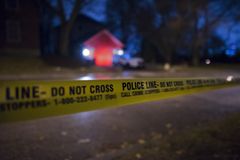