A meeting between Wet’suwet’en Nation hereditary chiefs and federal and B.C. officials planned for as early as Thursday was cancelled late Wednesday afternoon, after the chiefs refused to ask other First Nations to stop blockades and demonstrations of support.

A series of rail and highway blockades and other actions across the country have shown support for Wet’suwet’en Nation hereditary chiefs who are fighting a proposed $6.6-billion natural gas pipeline that would cross through their traditional territory.

“They cancelled ten minutes ago! We would not ask other nations allies to ‘step down’ so both Governments have walked away!” hereditary chief Na’Moks, also known as John Ridsdale, said in a text to The Globe and Mail.

“We need to at least meet with them, show a willingness to talk and be reasonable,” Mr. Ridsdale said on Wednesday afternoon

“I spoke with some of our Indigenous allies across Canada, and they said to at least start a discussion. Better to start a conversation is what our allies told us, and we’re following their advice.”​

An hour or so later, that discussion was off.

B.C. Premier John Horgan’s office confirmed the meeting plans had collapsed. “We had hoped the Hereditary Chiefs would agree to a period of peace and respect during the talks, which would include encouraging their supporters to remove blockades,” his statement reads. “We remain interested in meeting with Wet’suwet’en Hereditary Chiefs.”

Andrew Brant, who is from Tyendinaga Mohawk Territory, confirmed that the Wet’suwet’en hereditary chiefs did not ask the Mohawks to stand down during a conversation that took place Wednesday. Mr. Brant refused to reveal details about the discussion.

Mr. Brant said the talks scheduled between the Wet’suwet’en hereditary chiefs and federal and provincial governments were cancelled due to “broken promises, like usual.” Mr. Brant has repeatedly said Tyendinaga Mohawks won’t stand down until conditions laid out by hereditary chiefs are met.

The talks would have marked a potential bright spot after weeks of protests that began when the RCMP made a series of arrests earlier this month in Wet’suwet’en Nation territory. Those arrests came as RCMP enforced a Dec. 31 B.C. Supreme Court order meant to give the pipeline proponent, Coastal GasLink, access to work sites.

Rail service will take ‘many, many weeks’ to get back on track, Garneau says

Wet’suwet’en hereditary chiefs responded to the court order by issuing what they referred to as an eviction order for Coastal GasLink and announcing conditions for any meetings with government officials.

The hereditary chiefs said the RCMP must reduce their presence in Wet’suwet’en territory and that Coastal GasLink stop work while talks were under way.

Specifically, the chiefs demanded that the RCMP’s Community Industry Safety Office – set up in January, 2019, to allow Coastal GasLink to cross a bridge to get to work sites – be closed and that the RCMP cease patrols and be “completely removed” from Wet’suwet’en territory.

On Wednesday, Mr. Ridsdale said there had been progress on both fronts, with the RCMP agreeing to shut the outpost and also agreeing to reduce patrols in the area.

Indigenous youth who have been camping on the front steps of the B.C. Legislature say they don’t intend to leave until the RCMP and Coastal GasLink crews leave Wet’suwet’en territory.

Gitxsan youth Kolin Sutherland-Wilson said those who are upset about blockades undertaken in solidarity with the Wet’suwet’en hereditary chiefs should brace for more disruption if the pipeline is built.

“You will lose money,” he said. “Right now, Indigenous lands are being taken at gunpoint.”

Elsewhere, tensions escalated. Protesters acting in solidarity with the Wet’suwet’en lit a fire on the train tracks west of the Tyendinaga Mohawk camp near Belleville, Ont., on Wednesday. Public Safety Minister Bill Blair said the behaviour was “terribly unsafe and inappropriate.”

Speaking outside of the House of Commons on Wednesday, Prime Minister Justin Trudeau said the government is hopeful for a resolution soon, adding it is “extremely concerning to see people endangering their own lives and the lives of others by trying to interfere with the trains.”

In Quebec, Premier François Legault said the government has solid intelligence that Mohawk Warriors on the Kahnewake reserve have “dangerous, offensive weapons” including the AK-47 assault rifle, a contention Mohawk leaders and local police immediately and forcefully denied.

Mr. Legault told reporters Wednesday that he shared the information because he wanted to explain why the Sûreté du Québec provincial police have delayed serving and executing an injunction ordering protesters to clear Canadian Pacific tracks on the reserve south of Montreal.

“We have intelligence that confirms there are weapons, AK-47s to name them, very dangerous weapons,” Mr. Legault told reporters at the Quebec National Assembly. “Right now, [the SQ] is working on finding someone to serve the injunction and working on a plan to dismantle the barricade.”

Kenneth Deer, secretary of the Mohawk Nation of Kahnawake, said his people “are shocked and dismayed” by Mr. Legault’s comments. “We are not armed, and don’t intend to be armed. The protesters are here expressing their dismay at the situation.”

Mr. Deer and Constable Kyle Zacharie of the Mohawk Peacekeepers said people own firearms on the reserve, like any other community in Quebec. Constable Zacharie said officers from the Peacekeepers patrol the site hourly.

“There are elders there, there are children. It is a peaceful protest, it has been and will continue to be. It’s incorrect, reckless, dangerous, unprofessional to evoke such weaponry,” he said. “Nobody wants to go back to 1990,” the year of the three-month armed standoff at Oka, where a police officer was killed. “These kinds of statements is how we end up back there.”

In Question Period on Wednesday, NDP Leader Jagmeet Singh said the hereditary chiefs have asked the Prime Minister to meet with them.

“It is pretty simple,” he said. “Indigenous leaders and business leaders have all asked that this Prime Minister meet with the hereditary chiefs. For some reason, the Prime Minister does not get it.”

Mr. Trudeau said he explained to Mr. Singh during a recent meeting with opposition leaders that there are many voices within the Wet’suwet’en community.

“The work that they need to do, without outside interference, to determine their path forward would be interfered with by a Prime Minister’s sitting down with one group too quickly,” Mr. Trudeau said. “I am, of course, open to engaging constructively, but in the right way.” 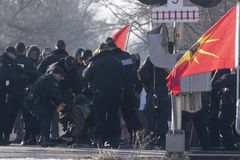 Follow Brent Jang, Kristy Kirkup, Les Perreaux and Wendy Stueck on Twitter @brentcjang @kkirkup @Perreaux @wendy_stueck
Report an error Editorial code of conduct
Due to technical reasons, we have temporarily removed commenting from our articles. We hope to have this fixed soon. Thank you for your patience. If you are looking to give feedback on our new site, please send it along to feedback@globeandmail.com. If you want to write a letter to the editor, please forward to letters@globeandmail.com.
Comments