Joanne Power drove over three hours to St. John’s to take part in a demonstration demanding better mental health and addictions care for people in Newfoundland and Labrador’s correctional system.

For Ms. Power, the issue is urgent: her son is incarcerated. He has mental health and addictions issues that aren’t adequately addressed in prison, she said. When she heard about the suicide of Greg Pike at Her Majesty’s Penitentiary in St. John’s last month, she said she could barely get through the day.

“That’s our biggest fear, that he is going to commit suicide or overdose,” Ms. Power said about her son. “Watching it happen to another family, it’s hard, it’s really hard.”

Ms. Power joined a few dozen people Saturday morning who stood outside Her Majesty’s Penitentiary in ferocious fall winds to bring more attention to the pressing mental health needs in the prison system. The demonstration was organized by Courtney Pike, Greg Pike’s sister.

His suicide is at least the sixth inmate death in Newfoundland and Labrador to spark an investigation or a review since 2017. Skye Martin and Samantha Piercey died in 2018 while incarcerated in the province’s women’s correctional facility in Clarenville, N.L. Doug Neary and Chris Sutton took their lives at the men’s jail in St. John’s, in 2017 and 2018, respectively.

Jonathan Henoche’s death in November 2019 at the jail was ruled a homicide and 10 correctional officers were charged in his killing. Charges have since been dropped against one of the officers.

Greg Pike died in hospital on Sept. 19, after officers found him unresponsive in his cell a few days earlier. The provincial Department of Justice has said his death is under review.

“He never got the help he needed,” Courtney Pike said Saturday about her brother. She pointed to the building behind the coils of razor wire. “He died in there,” she said, her voice breaking. “He never deserved this.”

Inmates in provincial custody are four times more likely to die of suicide than the general population, according to a 2016 study in the Canadian Family Physician journal. More than one in five Canadian inmates have attempted suicide, the study said.

Martha Paynter, a registered nurse and chair of Wellness Within, a group of health-care professionals and other community leaders advocating for health equity and justice in Nova Scotia, said the study – and the situation in Newfoundland and Labrador – shows it’s time to look for alternatives to incarceration.

“People are criminalized because of mental health and then the experience of criminalization causes mental health issues,” Ms. Paynter said in an interview. “We’re not solving anything the way we’re doing things now.”

April Hayley agrees. She held a sign at Saturday’s demonstration listing the names of the inmates who have died in Newfoundland and Labrador custody since 2017. Ms. Hayley was incarcerated with the two women who died at the women’s facility and her fiancé is at Her Majesty’s Penitentiary, she said.

“Most people who end up in here, sadly, it’s because of a drug addiction or mental health reasons,” Ms. Hayley said. “And they don’t get proper treatment. So how does putting someone in prison help them if they’re not going to give them any care?”

The provincial Department of Justice did not return a request for comment, but said previously that construction of a new men’s facility is on track to begin next year.

As for Greg Pike, his sister said he went before a judge just days before he died to ask if he could go to an addiction treatment centre, but he was sent to jail instead.

“He should have been in a rehab facility,” Courtney Pike said. 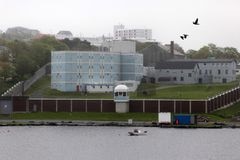