More provinces are planning to speed up their schedules for giving residents their first COVID-19 immunization shot after a national expert panel recommended the interval between doses can be extended to as long as four months, freeing up more of Canada’s limited vaccine supplies.

“We’re the first country, that I’m aware of, that has gone to four months,” said Shelley Deeks, vice-chair of the National Advisory Committee on Immunization (NACI) which released a formal recommendation on the interval on Wednesday.

The new recommendation applies to all three coronavirus vaccines available in Canada.

The decision paved the way for health jurisdictions across the country to follow British Columbia’s decision to adopt a four-month interval on Monday. The province said its mass vaccination program will be completed two months earlier as a result.

Provinces including Quebec, Ontario, Alberta and Manitoba indicated they are following B.C.’s lead.

Dr. Deeks said the committee looked at evidence from vaccination campaigns in Quebec, British Columbia, Britain and Israel that showed a single dose of all the approved vaccines provided sustained protection against COVID-19 for at least two months.

She said no data were yet available to support a four-month interval, “but given that the vaccine effectiveness is sustained and it hasn’t actually decreased at the two-month mark, the four-month mark is reasonable.”

In its recommendations, the committee also cited internal modeling studies by the Public Health Agency of Canada (PHAC) that showed an interval as great as six months between doses could reduce hospital admissions and deaths owing to COVID-19.

NACI recommended in January that doses be administered no more than 42 days apart, but PHAC asked the committee to reconsider last month, when it became clear that Pfizer-BioNTech and Moderna would send fewer doses of their coronavirus shots to Canada than expected in February.

The companies have now ramped up shipments, and are expected to meet their commitments to dispatch six million doses between them to Canada by the end of this month.

Postponing the second shot does not mean recipients will have to wait an additional four months to be well-protected against COVID-19. Dr. Deeks said immunity typically begins about two weeks after the first dose and becomes stronger with time. The second dose is believed to make immunity more durable, although it’s too early to say how long it will be before protection wanes.

Danuta Skowronski, a medical epidemiologist at the BC Centre for Disease Control, said the committee’s recommendations reflect a balancing of vaccine supply with fundamental scientific principles, including what is known about the effectiveness of other vaccines after a first dose.

“Once good vaccine protection is established, it doesn’t suddenly disappear,” said Dr. Skowronski, who is co-leading a B.C.-Quebec study that has been measuring the continuing effectiveness of COVID-19 vaccines in more than 200,000 front-line workers and more than 45,000 long-term care residents in both provinces

She added that in data that now cover up to two months after a first dose, “we are seeing sustained protection.”

B.C.’s announcement on Monday prompted criticism from Canada’s chief science adviser, Mona Nemer, who said she is not aware of data to support such a long wait for the booster.

But on Wednesday, B.C. Health Minister Adrian Dix welcomed the NACI recommendation as a vindication. He said the longer gap will allow hundreds of thousands more people in his province to get their first dose over the next three months. “We expected that and we’re very positive about it,” he said.

Deferring booster shots to four months will mean 250,000 more people in Quebec can be vaccinated sooner, according to a statement from the Ministry of Health and Social Services. In a statement, Quebec Health officials noted that the province led the country in adopting a three-month interval, allowing it to vaccinate more vulnerable people in a shorter period. With low vaccine supply and the spread of COVID-19 variants of concern, the statement said, an extension is justified.

Ontario also welcomed the new guidance. “This will allow Ontario to rapidly accelerate its vaccine rollout and get as many vaccines into arms as quickly as possible and, in doing so, provide more protection to more people,” Alexandra Hilkene, a spokesperson for Ontario Health Minister Christine Elliott, said in a statement. Ontario is preparing to announce the second phase of its vaccine rollout, and will adopt the new guidance in that, she said.

The manufacturers of the three vaccines currently approved for use in Canada do not recommend an interval of four months between shots, but public health officials say that real-world experience has shown the change is good public policy, given the shortage of vaccines and the pressing need to curb the pandemic.

Alberta on Wednesday also said it will adopt the four-month dosing schedule. Deena Hinshaw, the province’s Chief Medical Officer of Health, said if supply holds steady, all Albertans who are 18 or older could receive their first dose “by early summer.” The timeline will be similar to B.C.’s, she said.

“If we can give that 70 to 80 [per cent] protection to as many Albertans as possible as quickly as possible, that provides us with the greatest benefit overall,” she said.

Joss Reimer, who leads Manitoba’s vaccine task force, said evidence is sufficient now to justify a delay in delivering boosters. “There is more of a clear advantage to getting more vaccine to more people sooner.”

“I think it’s going to save lives,” she said. “I think it means we’re going to get out of this pandemic sooner.”

With reports from James Keller, Laura Stone and Mike Hager 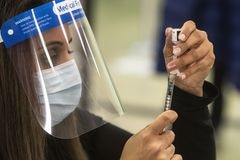 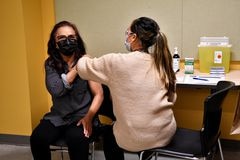 Experts answer pressing questions at the COVID-19 Vaccine Town Hall series
March 24, 2021
Follow Justine Hunter, Kelly Grant and Ivan Semeniuk on Twitter @justine_hunter @kellygrant1 @ivansemeniuk
Report an error Editorial code of conduct
Due to technical reasons, we have temporarily removed commenting from our articles. We hope to have this fixed soon. Thank you for your patience. If you are looking to give feedback on our new site, please send it along to feedback@globeandmail.com. If you want to write a letter to the editor, please forward to letters@globeandmail.com.
Comments