Canada is on track to log 5,000 coronavirus cases a day by late October if the country’s epidemic continues on its current course, the Public Health Agency of Canada is warning.

In its first formal projection since mid-August, the agency predicted that if Canadians keep coming into close contact with as many people as they do now, the epidemic curve will rise sharply from the current average of about 1,000 new cases a day to five times that number within a month. That is more than twice the number reported at the height of the spring wave. 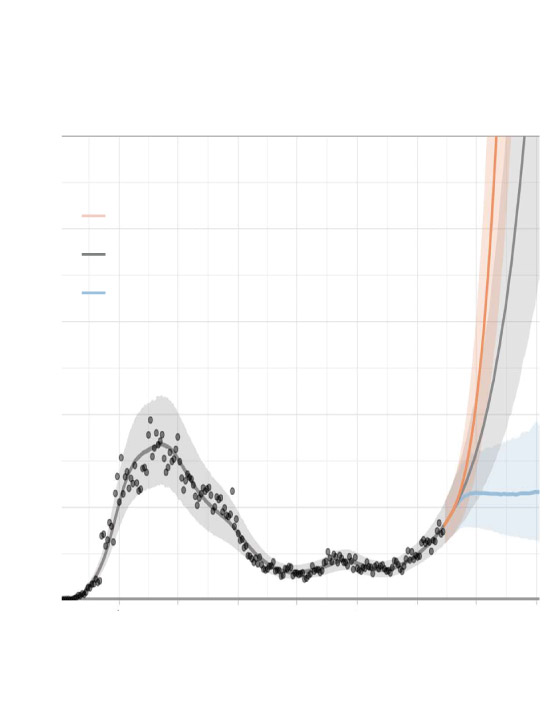 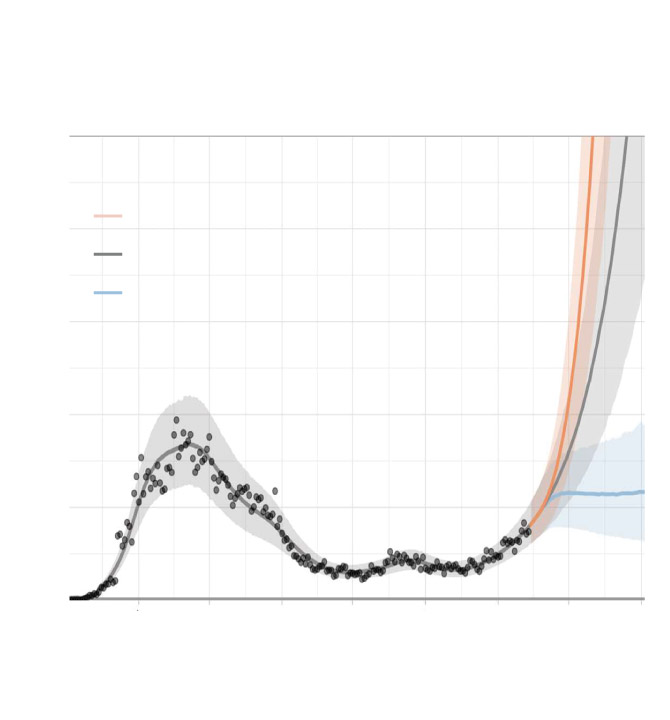 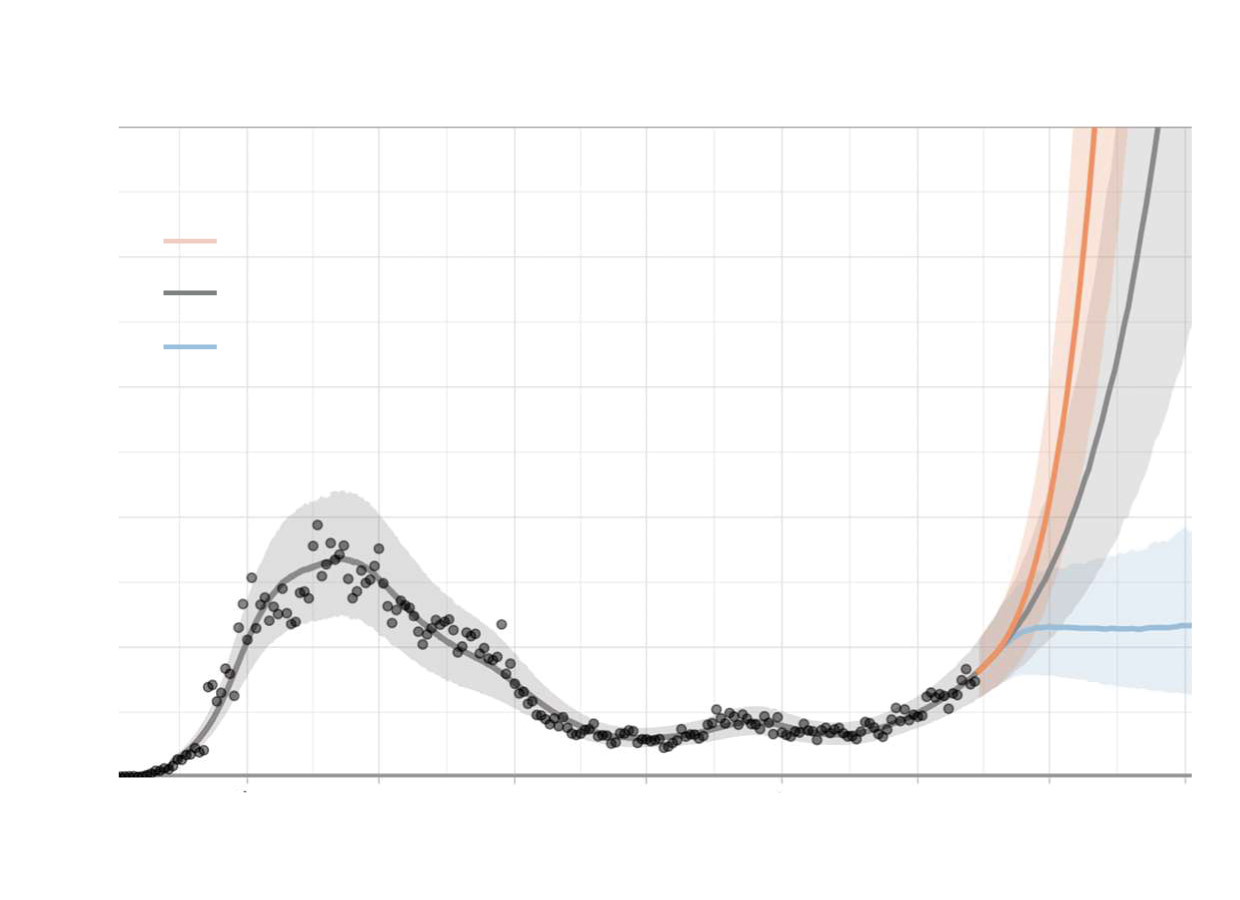 “My message today is the time is now. We’re at a bit of a crossroads,” Chief Public Health Officer Theresa Tam said. If Canadians retreat to small social circles and avoid large get-togethers, she said, the country "can manage this without a lockdown.”

Dr. Tam said that although the number of COVID-19 deaths and hospital admissions in Canada remain low relative to the first wave, both figures are beginning to creep up – a signal that the virus is spreading beyond the young people driving the surge.

Still, the situation in Canada remained far less dire than in the United States, where deaths surpassed 200,000 on Tuesday, and Britain, which has imposed new COVID-19 restrictions after a quadrupling of cases over the past month.

When it comes to what’s in store for Canada this fall, the public-health agency’s predicative modelling is not a crystal ball, said Caroline Colijn, a professor at Simon Fraser University and Canada 150 Research Chair in mathematics for evolution, infection and public health. She and her colleagues designed the model on which the agency’s latest forecast is based.

“[The models] are tools we use to help us understand the trajectory we’re on. Then we get to choose,” she said. “It’s like having a flashlight. If you see a cliff, you don’t just necessarily walk over it because the flashlight showed you it was there. You do something. You don’t walk over the cliff.”

Prime Minister Justin Trudeau is expected to re-emphasize the urgency of fighting COVID-19 in a television address that follows the Throne Speech on Wednesday.

The public-health agency made its latest forecast as Ontario and Quebec continued to account for the majority of new cases nationwide, and as Ottawa’s Medical Officer of Health, Vera Etches, announced she would charge fines as high as $5,000 a day to anyone who breaks an order to self-isolate.

Ottawa Public Health reported a record 93 cases on Tuesday while Ontario announced 478 cases, the most since May.

“The goals in responding to the pandemic are to keep the level of COVID-19 transmission in the community from disrupting society in a detrimental way and to limit hospitalizations and deaths,” Dr. Etches told reporters. “This level we’re seeing is too high for these purposes. We need to bend the curve down right now.”

Dr. Etches said people who are testing positive are linked to schools – 34 in Ottawa have had at least one person test positive – and long-term care homes. Eleven of the 29 long-term care homes in Ontario where a COVID-19 outbreak has been declared are in Ottawa and its surrounding suburbs, according to the Ministry of Long-Term Care.

Dr. Etches has asked the Ottawa Hospital to temporarily take over management of two homes owned by Extendicare to get major outbreaks under control. At the for-profit chain operator’s Laurier Manor, a 242-bed home in the suburb of Gloucester, 25 residents have died of the virus. At West End Villa, another 242-bed home in Ottawa, 11 residents have died since an outbreak of COVID-19 was declared on Aug. 30.

Normally, the Ministry of Long-Term Care orders hospitals to assume management of troubled homes. But Dr. Etches said her office could move more quickly than the ministry. “We all agreed using an order like this is more expedient to get the support in right away,” she said.

Quebec, meanwhile, announced 489 new cases on Tuesday, a decline from the 586 it registered on Monday, but Health and Social Services Minister Christian Dubé said it was too soon to celebrate. On Tuesday, two new regions, Outaouais and Laval, were elevated to orange status, the second-highest tier in the province’s COVID-19 alert system, after a spike in cases and outbreaks.

The current wave of the pandemic is markedly different from the first, Mr. Dubé said. This time outbreaks are spread more widely among the province’s regions, rather than concentrated in Montreal, and more likely to involve young people. Cases are also being spread in the community at large, rather than being clustered in the long-term care homes that accounted for more than 80 per cent of Quebec’s COVID-19 deaths.

In Ontario, Premier Doug Ford announced the first pillar of a broad six-point plan to prepare for a second wave of COVID-19: a flu immunization campaign. Mr. Ford said the province has ordered 5.1 million doses and is working to order more. “Anyone who wants a flu shot can get one,” Mr. Ford said. “Please, please make sure you get yours.”

He said the other elements of the fall plan, which are set to include expanding testing and contact tracing as well as reducing surgery backlogs, will be released over the next several days – a timeline that had the opposition accusing the government of being wildly unprepared.

Mr. Ford said given “the size and scope” of the plan, his government needed more time to roll it out.

As governments in Central Canada grappled with surging case counts, the federal government announced Tuesday that it had secured an agreement in principle for a fifth experimental coronavirus vaccine, a protein-based candidate developed by the pharmaceutical giants Sanofi and GlaxoSmithKline.

Anita Anand, the federal Minister of Public Services and Procurement, revealed for the first time that the government has committed about $1-billion in total to its five vaccine deals, some of it up-front. The remaining payouts will depend on whether any of the vaccines succeed in late-stage trials and win Health Canada approval.

She also unveiled a deal with the maker of the antiviral drug remdesivir, the only medication officially approved to treat COVID-19, to bring 150,000 vials of the drug to Canada beginning next month.

With reports from Laura Stone and Eric Andrew-Gee