The pharmaceutical giant whose pain pill triggered an overdose epidemic that has devastated communities across North America has stopped marketing its opioids in Canada.

Purdue Pharma announced the change in response to the federal government calling on drug companies to suspend all marketing and advertising activities associated with opioids. The move comes more than four months after Purdue’s Stamford, Conn.-based parent company stopped promoting prescription painkillers in the United States.

David Pidduck, chief executive officer of Purdue’s Canadian operation, says in a letter dated June 27 to Health Minister Ginette Petitpas Taylor that the company ceased “all promotional and advertising activities relating to our prescription opioids” as of June 20.

Any requests from physicians about Purdue’s opioid products will be handled “reactively” through direct communication with health-care staff in the medical-affairs department, Mr. Pidduck says in his letter, which is posted on the company’s website.

“While we have taken this action, we remain steadfast in our belief that Canadian prescribers require the most recent information … to ensure that patients are treated appropriately,” the letter says.

Ms. Petitpas Taylor has asked drug makers to voluntarily suspend their promotional activities relating to opioids while Health Canada develops policies aimed at restricting the marketing and advertising of the drugs. Health Canada plans to introduce proposed regulations in early 2019.

Purdue is one of five drug companies that have stopped marketing opioids since receiving the minister’s letter with the request, Mathieu Filion, her director of communications, said in an e-mail response on Wednesday. He did not identify the other companies.

Ms. Petitpas Taylor sent the letter on June 19, the same day the federal government released new figures showing that opioid-related overdoses claimed the lives of nearly 4,000 Canadians in 2017, up 34 per cent from the previous year. Overprescribing is behind the opioid crisis, which has worsened in recent years with the arrival of illicit fentanyl, leading to a sharp spike in overdose deaths.

Canada’s opioid epidemic traces its roots to 1996, with the introduction of OxyContin, a prescription painkiller made by Purdue. Until then, opioids had been used primarily for terminal cancer patients. But Health Canada approved OxyContin to relieve pain that was moderate to severe and Purdue marketed the drug as safer and less addictive than other opioids.

OxyContin became the top-selling long-acting opioid in Canada for more than a decade. At the same time, reports of addiction and overdose due to the drug mounted – both among those who had been prescribed the painkiller, and those who used diverted pills illicitly.

Purdue pulled OxyContin from the market in 2012, shortly before the patent was to expire. A host of other, stronger drugs filled the void, including illicit fentanyl, which began appearing on the streets in Canada in 2012.

Purdue has acknowledged in the United States that its marketing of OxyContin was misleading and paid $634.5-million (U.S.) in 2007 to settle criminal and civil charges. The company stopped marketing opioids to physicians in the United States in February amid mounting lawsuits from states and American municipalities accusing it of deceptive marketing.

However, Purdue’s Canadian operation has not made a similar admission of wrongdoing. A proposed national class-action settlement remains on hold after a Saskatchewan judge rejected it in March, saying the $20-million in compensation that Purdue has agreed to pay is neither fair nor reasonable for the people who became addicted to the drug after their doctors prescribed it.

Purdue is seeking leave to appeal the judgment. Lawyers for Purdue argue in their draft notice of appeal that judges in three other provinces – Ontario, Quebec and Nova Scotia – approved the proposed settlement last year.

The settlement cannot go ahead unless it is approved in all four provinces. A hearing is scheduled for Aug. 22 in the Court of Appeal for Saskatchewan.

Purdue Pharma to stop marketing opioids to U.S. physicians, but policy not extended to Canada
February 11, 2018 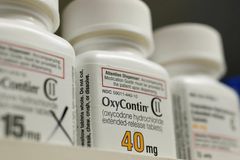 Nova Scotia court approves settlement with OxyContin maker Purdue Pharma
August 1, 2017
Ottawa urged to prosecute Purdue Pharma over marketing of OxyContin
July 19, 2017
Follow Karen Howlett on Twitter @kahowlett
Report an error Editorial code of conduct
Due to technical reasons, we have temporarily removed commenting from our articles. We hope to have this fixed soon. Thank you for your patience. If you are looking to give feedback on our new site, please send it along to feedback@globeandmail.com. If you want to write a letter to the editor, please forward to letters@globeandmail.com.
Comments