Last March, Quebec Premier François Legault made a mocking remark in the legislature that the Liberals are still talking about.

Responding to a question from interim Liberal Leader Pierre Arcand, a grinning Mr. Legault replied: “I’m not sure if I should be speaking in French or in English to the Liberal party today, so that they can understand properly.”

Mr. Legault was insinuating the Liberals – who had held power for years before the October, 2018, election – were the party of English-speaking Montreal, while the new Coalition Avenir Québec government had the support of the francophone majority.

The Premier’s comments might have been directed at the Official Opposition, but they reflected a new government tone and approach toward anglophones – particularly to the lobby groups and other institutions, such as school boards, that claim to speak for them.

Mr. Legault’s Coalition has its support base outside Montreal, and it isn’t afraid of making policy decisions it knows are going to be massively unpopular with English speakers.

Liberal member Greg Kelley, who represents a riding in Montreal’s English-speaking West Island, said in a recent interview that Mr. Legault’s government uses the rhetoric of us versus them.

“It’s frustrating, because it’s not the tone you want to hear from the Premier,” Mr. Kelley said of Mr. Legault’s March comments.

“There is a lot of this: ‘We have the support of the francophones, and you people are just the others.’ You see it in what they say sometimes in the [legislature].”

Just north of Montreal is Laval, home to the riding of Christopher Skeete, a member of Mr. Legault’s Coalition and his point-man for relations with Quebec anglophones.

Born to a Québécois mother and a Trinidadian father, Mr. Skeete – a Laval native – is as comfortable in French as he is in English. And he defends his boss.

“When you look at Liberal support, you would be hard-pressed not to recognize that the Liberal party has been relegated to the island of Montreal,” Mr. Skeete said. All but four of the 31 seats the Liberals won in the October election were in or around Montreal.

“They are in the last bastions of support,” he continued. “I think it’s fair game to highlight that in a partisan boxing match. Does it mean we have anything against English-speaking Quebeckers? No.”

But recent cabinet decisions are creating a sense of anxiety among anglophones, who worry the worst is yet to come, said Geoffrey Chambers, president of the Quebec Community Groups Network (QCGN).

QCGN, an anglo-rights advocacy organization, had successfully lobbied the Liberal government in 2017 to create an office dedicated to the concerns of the province’s main linguistic minority, called the secretariat for relations with English-speaking Quebecers.

The secretariat’s public face is now Mr. Skeete – and he isn’t playing the role QCGN and the Liberals want him to play.

“The initial indications from the [Coalition] were that they were going to be quite open,” Mr. Chambers said in a recent interview. But over time, Mr. Chambers realized the conversations his group was having with Mr. Skeete and others in the Coalition “were having absolutely no impact over policy.”

An example, Mr. Chambers said, was the removal of English-language signs at a hospital in Lachute, Que., about 80 kilometres northwest of Montreal. The province’s language watchdog demanded last December they be removed despite protests from anglophone and francophone municipal politicians in the region.

Mr. Legault defended the move, and Mr. Skeete backed him up.

A month later, the education minister announced he would shut down an underused English high school in Montreal and transfer it to a French-language school board. In June, he took away another two underused English schools and gave them to the overcrowded French system, sparking an outcry in anglophone Quebec.

French-language schools in Montreal have been overflowing for years, he said, and the Liberals let the problem fester during their time in power.

Mr. Skeete even suggested the previous government was too afraid of upsetting anglophone power brokers and of losing votes to properly govern the city’s school system.

“After 15 years of Liberals and Liberal ambitions … now to have an outside party, who’s never been in power, who doesn’t owe anybody anything, making rational decisions based on fact – that’s very unsettling for people who used to have immediate access and immediate influence,” he said.

But the big fight between anglophone organizations and the government likely still lies ahead.

Mr. Chambers said the Lachute sign incident and the school transfers are “a worrying foreshadowing of bigger problems to come.”

“Everyone knows we plan to abolish school boards,” Mr. Skeete acknowledged. But, he explained, any decision made by the government will respect the minority language education rights guaranteed in the Canadian Charter of Rights and Freedoms.

He insists anglophones will not lose access to or control over their schools, but he nonetheless expects conflict with the QCGN.

He insisted ordinary anglophones shouldn’t worry. “We will have the best interests of the English community at heart,” he said.

Opinion
Quebec’s anglophones are under ‘attack’ by their government
Subscriber content
July 19, 2019 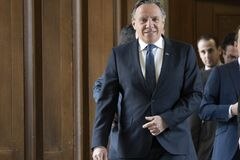 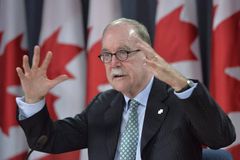