The Quebec Court of Appeal has rejected a request to suspend the province’s religious symbols law until a final court ruling despite agreement among the three-judge panel that the law risks causing irreparable harm to female teachers who wear veils.

In a 2-1 decision, the appeal court ruled judges must defer to the Quebec legislature, which passed the law restricting religious garments in some public service jobs, until the full case is heard at a trial scheduled for October, 2020.

The 37-page judgment, which featured all three judges weighing in with separate reasons, offered a road map for the messy legal debate ahead with four separate challenges before the courts.

The two-judge majority found that the Quebec government’s use of the constitutional notwithstanding clause to shield the law from most avenues of legal challenge prevents them from concluding the law is constitutionally invalid at this preliminary stage. On balance, they said, the right of the legislature to pass laws outweighs the harm the law does to career aspirations of some religious people.

“It will be up to the judge on the merits of the case to adjudicate the numerous legal and constitutional issues the Act raises, in light of the evidence and arguments submitted after a full judicial debate,” Justice Robert Mainville wrote in rejecting the request. “In the meantime, the Act must be presumed constitutionally valid."

Justice Dominique Bélanger, who also rejected the injunction request, said the courts “must be deferential at this preliminary stage” when the notwithstanding clause is invoked.

“I acknowledge, however, that it may seem counterintuitive to ask the courts to set aside certain fundamental rights whose respect they have worked for decades to ensure,” she wrote. “At this stage of the case, the courts must abandon to their fate women graduates who are willing to work and who, for the sole reason that they wear the veil, have been denied access to a job for which they hold all the skills.”

Both judges also said they needed more evidence that the law targets women before they could set it aside.

Aspiring teacher Ichrak Nourel Hak, backed by the National Council of Canadian Muslims and the Canadian Civil Liberties Association, launched a court challenge and requested the injunction to suspend the law the day after Bill 21 passed June 16. Quebec Superior Court rejected the request in July.

Among other measures, the law bans teachers, police officers, prosecutors and other public servants the government considers authority figures from wearing religious symbols. The plaintiffs in the various lawsuits are mostly Muslim female teachers.

The plaintiffs argued the law infringes on gender equality rights guaranteed under section 28 of the Canadian Charter of Rights and Freedoms – rights that can’t be abridged using the notwithstanding clause.

Chief Justice Nicole Duval Hesler was alone in finding in their favour. In her dissenting opinion, the judge said the application of the notwithstanding clause “is doubtful” and that fundamental rights should be prioritized while the case is fully adjudicated.

“The public’s interest in seeing to it that female teachers are immediately targeted by the legislative measure is not greater than the interest of the group of female teachers in question,” Justice Duval Hesler wrote.

Leaders for the two organizations behind the court challenge expressed disappointment with the ruling. Mustafa Farooq, executive director of the National Council of Canadian Muslims, said his team is "reviewing our options now.”

Noa Mendelsohn Aviv, equality program director at the Canadian Civil Liberties Association, said they are “not done fighting this unjust law.” She described the ruling as “devastating.”

Quebec Justice Minister Sonia LeBel said she was satisfied with the decision. “We will continue to defend the constitutionality and sound foundation of the law,” she said in a statement.

Opinion
The sole premier to stand up against Bill 21
December 1, 2019 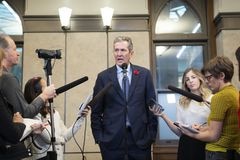 Opponents argue Bill 21 has a disproportionate impact on women and is unconstitutional
Subscriber content
November 26, 2019 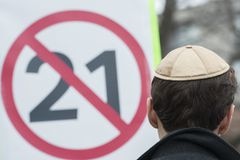