After weeks of pitching promises and slinging mud from afar, Quebec’s political leaders began preparing for their first face-to-face tilt as they reached the halfway point of the provincial election campaign Tuesday.

The leaders began scaling back on activities, with their focus turning to Thursday night’s highly anticipated French debate.

Meanwhile, a Leger poll conducted for the Montreal Gazette and Montreal Le Devoir suggested the Coalition Avenir Quebec was still leading the Liberal party, but that a large number of voters could still be in play.

“We still see the CAQ in the lead at 35 per cent, they’re holding on strong with over 42 per cent of francophone voter intentions in Quebec,” said Christian Bourque of Leger.

“And they are fully six points ahead of the Liberals at 29 per cent so this would still put Francois Legault, mathematically, in majority territory.”

But Bourque said there are also signals the race is tightening up ahead of Oct. 1, including a hike in support for the Parti Quebecois.

Concordia University political scientist Daniel Salee said one thing missing from the campaign so far is a large project, but he added that was also the case in recent campaigns in Ontario or New Brunswick.

“We seem to be in a kind of environment and political spirit where, essentially, greater vision or social and political projects are not on the agenda,” Salee said. “It’s more about very specific policy questions ... what can I do to please that group of the electorate.”

While the Liberals have suggested in recent days that immigration and identity may turn out to be the ballot question, Salee said that remains to be seen.

The question of how many foreigners to welcome to Quebec – in the wake of labour shortages across the province – has become an issue, with the Liberals wanting to maintain the current levels of 50,000 a year before eventually increasing them.

“It follows in the footsteps of this constant protracted discussion we’ve had in Quebec since the reasonable accommodation debate in 2007,” Salee said. “It’s kind of an unresolved issue and it’s a question of showing ... (which party) who has the higher moral ground.”

Coalition Leader Francois Legault, who wants to reduce the number to 40,000, challenged his Liberal rival, Philippe Couillard, to indicate before Thursday’s debate how many more newcomers he would bring in.

Prime Minister Justin Trudeau was asked about the topic during a visit to Winnipeg on Tuesday.

“It won’t surprise you that I am strongly in favour of immigration as a source of economic growth,” Trudeau said.

“And when I’ve travelled throughout Quebec, what I’ve heard most often are concerns about an aging population and a labour shortage. So we need immigration to create this economic growth.”

Back in Quebec, Couillard made a $200-million pledge to provide free public transit for all seniors and full-time students across the province and was asked what he would change given his party’s poll numbers.

“Certainly not my values and the values of my party,” he replied. “I do think the vast majority of Quebecers rally around these values and I also do think our policies since 2014 have been in tune with those values and I’m not ever bargaining my values away.”

Thursday’s debate, as well as two others next week, could be turning points in the campaign.

“There’s a lot of banana peels in front of the party leaders between now and Oct. 1,” Bourque said.

Parti Quebecois Leader Jean-Francois Lisee, meanwhile, announced plans to impose a series of measures including limiting the salaries of Crown corporation executives to a maximum of $250,000 per year, except for the head of the Caisse de depot pension fund.

The PQ said it would also introduce a tax on companies that have a significant gap between the income paid to executives and to employees; institute stricter rules on tax havens; and apply provincial sales tax to foreign goods purchased online.

With files from Julien Arsenault and Vicky Fragasso-Marquis in Laval, Que. and Stephanie Marin in Montreal 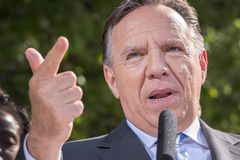 Language and immigration come to the front in Quebec election
September 7, 2018 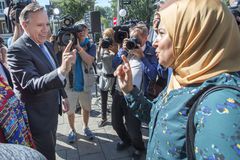