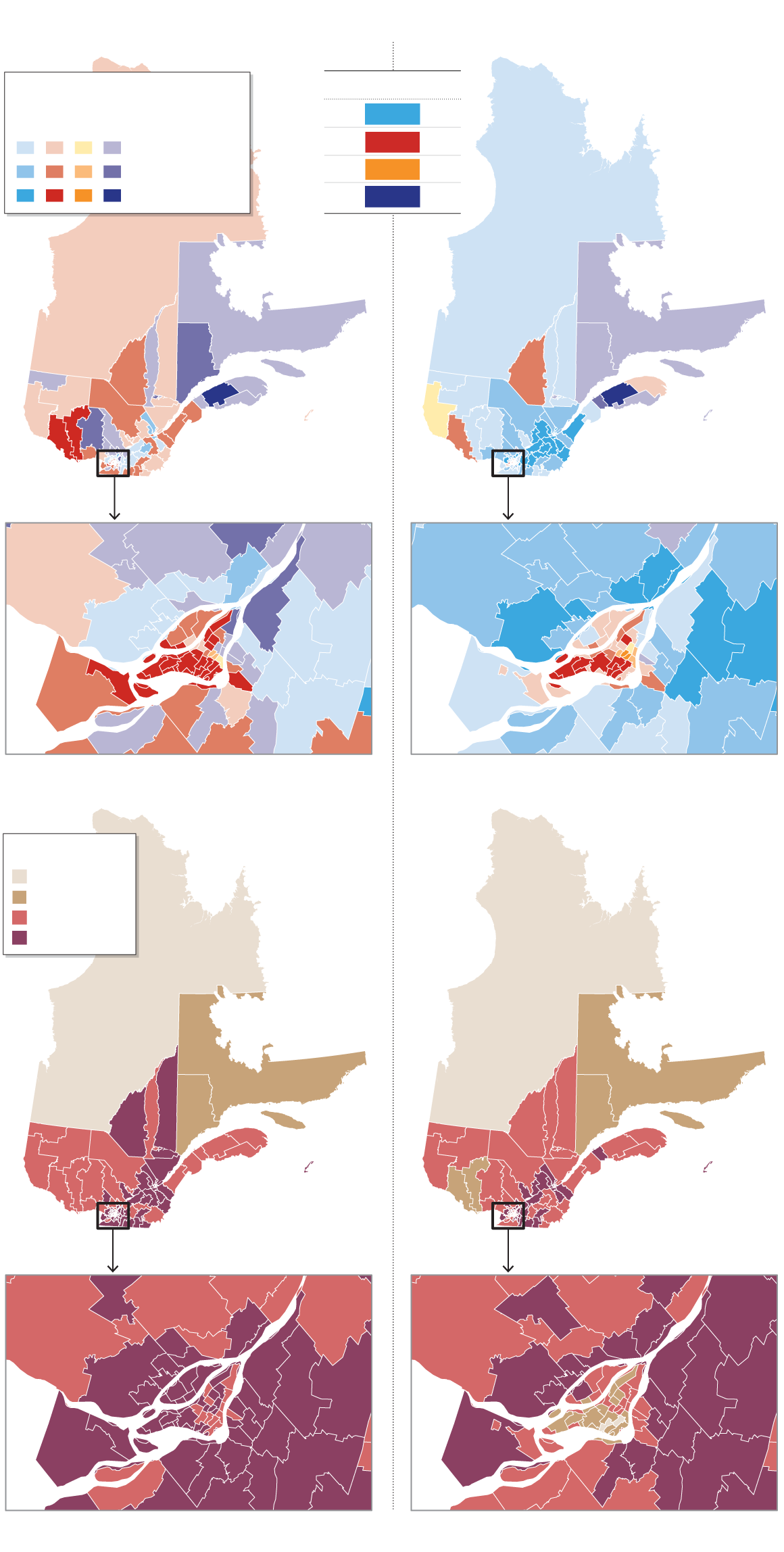 This is only the third election for the Coalition Avenir Québec, a populist coalition of federalists and former separatists that François Legault, a former Parti Québécois cabinet minister, co-founded in 2011. But this was also Quebec’s first election in four decades in which sovereignty wasn’t a campaign issue, which freed up traditional voting blocs – federalist and separatist alike – to change their allegiances. Mr. Legault profited from that upheaval more than anyone else: His party won traditional Liberal seats in the Eastern Townships, Outaouais and Montreal region, as well as PQ bastions like Lac-Saint-Jean.

A jubilant Mr. Legault reached out to both sides of his new voter base on Monday night. “Today Many Quebeckers have demonstrated that it’s possible to make adversaries from yesterday work together for tomorrow,” he said in his acceptance speech.

The Liberals have governed Quebec for the past 15 years, aside from an 18-month interlude of PQ rule in 2012-14. But on Monday night, Leader Philippe Couillard led the party to one of its worst defeats: It got less than 25 per cent of the popular vote, down from 41.5 per cent in the last election, as voters in majority francophone ridings turned mostly to the CAQ. In his concession speech, Mr. Couillard congratulated Mr. Legault and took responsibility for the Liberals' losses, saying he would “undertake a reflection on my personal future” as leader of the party. Mr. Couillard is expected to resign on Thursday. “In politics, you have to learn how to taste the joy of victory and accept defeat because they are the two sides of democracy. I am not bitter and I ask you not to be. I am proud and you should be also.”

The PQ, a dominating force in Quebec politics for more than 50 years, got reduced to fourth-place status in one of its worst election performances ever. It won only 17 per cent of the popular vote and just nine seats, short of the 20 per cent and 12 seats it needed to maintain official party status. Leader Jean-François Lisée lost his Montreal seat of Rosemont and announced his resignation, taking “a large part of the responsibility” for the disappointing result.

The PQ had been outflanked on the left by the Québec solidaire party, which Mr. Lisée had accused of being a stealth “Marxist" front. QS grew from three seats to 10, and made inroads beyond its usual base of support in Montreal. “Québec Solidaire is not just the party of the Plateau Mont-Royal," party’s co-spokesperson Manon Massé said Monday night, referring to the bohemian Montreal neighbourhood seen as the party’s traditional turf. "Québec Solidaire is the party of people who want change for real.”

For all the rhetoric of change and political alliances breaking down, not as many Quebeckers voted this time around as in previous years. As of Tuesday morning, the estimated turnout was just over 66 per cent, the second-lowest in 45 years. (The next-lowest, from 2008, was a snap election held only a year after the previous one that took the Liberals' Jean Charest from minority to majority government.)


Is Legault the premier yet?

No, he’s the premier-designate. He officially becomes the premier when he and his cabinet are sworn in by Quebec’s Lieutenant-Governor, J. Michel Doyon. Please gently correct anyone who calls Mr. Legault “premier-elect”: There is no such thing in Canada’s parliamentary system, in which premiers are the leaders of parties or coalitions who have the most seats in their legislatures. No one is directly elected to the office of premier.


The issues at stake

Immigration was one of the fault lines of this election: The Liberals planned to raise the immigration quota from 50,000 per year to 60,000, while the CAQ vowed to cut it to 40,000 and subject immigrants to a “Quebec values” and French-language test, potentially expelling those who failed it. Toward the campaign’s end, even Mr. Legault was unclear about how the policy would work; he failed to answer several key questions about immigration in the province, and at the final debate, he softened his tone somewhat and admitted “It happens, I make mistakes, when I answer certain questions on immigration. I listen, and I correct my mistakes.”

Clarifying Quebec’s future policy on immigration, and convincing Quebeckers to support it, will be a major challenge for the CAQ government: Immigration to Quebec has grown over recent years, as indicated in the charts below, but the province has had trouble retaining immigrants in the face of competition from Ontario and Western Canada. That’s exacerbated labour shortages in the province that municipalities had hoped to fill with immigrant workers.

Mr. Legault, a former airline executive, ran on promises of low taxes and business-friendly policies. But investors will still have to be convinced that an untested party, only seven years old, will deliver on those pledges once in government. Mr. Legault has one big advantage: A lower debt and balanced budgets inherited from his Liberal predecessor, who instituted unpopular cuts to health care and social services to make that happen. “The new government will take the reins of the province in a very enviable situation,” Sébastien Lavoie, chief economist for Laurentian Bank in Montreal, told The Globe and Mail. “Back in 2014, credit agencies were putting pressure on the province, and economic growth was sluggish. Now, it’s as good as it gets in terms of economic momentum. The house is in order.”

Just as Quebec’s party leaders were wrapping up their last campaign day, Canadian and U.S. negotiators in Washington concluded a historic trade deal that will have big implications for Quebeckers. The proposed United States-Mexico-Canada Agreement, successor to the North American free-trade agreement, would open up a percentage of Canada’s protected dairy market to U.S. producers. Farmers in Quebec, the largest dairy-producing province, stand to lose a lot from increased competition and the end of policies that allowed them to sell surplus skim milk easily. All of Quebec’s party leaders opposed any softening of supply management, but it is now Mr. Legault who has to deal with the impact.

Tonight, Quebecers chose a new government and I congratulate @FrancoisLegaultand the @CoalitionAvenirQuébec on their election victory. I’m looking forward to working together to make life better for middle class families in the province: https://t.co/D79yJpfb9w

Congratulations to Quebec Premier-designate @francoislegaultand the @coalitionaveniron their impressive majority government victory tonight. I look forward to working with Mr. Legault and his new government in the future. #electionqc

My congratulations to Quebec’s Premier-designate, @francoislegault. I look forward to working with the new government to defend Quebec's interests in Ottawa. To all of the parties, wishing you a job well done on your campaigns. #electionqc

Just spoke with Quebec’s Premier–Designate @FrancoisLegaultto congratulate him on his victory. I look forward to working with Quebec to improve the lives of all Canadians, and to continue strengthening the historic relationship between our provinces. Félicitations ! #qcpoli

Félicitations @francoislegault, the next Premier of Québec.

Campbell Clark: For Trudeau, Quebec’s Legault is a new kind of challenge

With reports from Les Perreaux, Ingrid Peritz, Rhéal Séguin and The Canadian Press