Quebec won’t begin administering the second shot of the COVID-19 vaccines until mid-March, a move designed to give the initial shot to more health care workers and elderly people, but one raising concerns that it could undercut the efficacy of the medication.

The province announced its decision to delay the final injection for up to 90 days on Thursday, two days after a national advisory panel on immunization formally said it is preferable to complete the two-dose regimen within 42 days.

Quebec’s move would allow the province to supply the initial dose to more vulnerable people, officials said. “In our context, that’s the best strategy. We don’t have a lot of doses and we are in a race against time,” Quebec Health Minister Christian Dubé said.

The Pfizer-BioNTech and Moderna vaccines currently administered in Canada are to be injected in two doses separated by 21 and 28 days, respectively.

The National Advisory Committee on Immunization, which makes recommendations for the use of vaccines, says prolonging the wait to 42 days is acceptable.

Richard Massé, strategic adviser to the Quebec public-health department, acknowledged there is little scientific data about the efficacy of the initial shots beyond 42 days but added that past experience with other vaccines show that their protection doesn’t end abruptly.

“Immunity is not a thing that’s like hitting a wall and it’s not there any more,” he said.

While the increase in new cases has slowed in recent days in Quebec, government forecasts indicate that hospital capacity in Montreal might still be overwhelmed within three weeks.

Dr. Massé said the province would monitor the effect of the vaccination delay and adjust its strategy accordingly.

Some researchers have raised concerns about delaying the second shot. They note that, unlike past vaccines using attenuated viruses, the Pfizer-BioNTech and Moderna medications rely on new mRNA technology that gives the body genetic instructions to replicate the protein the coronavirus uses to invade human cells.

Ilan Schwartz, a professor in the division of infectious diseases at the University of Alberta, said it is “potentially risky” to change the vaccination regimen just when the new drugs offer the prospect of beating back the virus when used as recommended. “We are making assumptions and extrapolations that are not based on science. They are based on what we know from vaccines using a different technology,” he said.

It is possible that a delayed second dose would still provide an effective boost but “it’s unwise to make broad vaccine guidance for a novel vaccine platform without some data to support it,” added virologist Angela Rasmussen, who is moving this spring to the University of Saskatchewan’s Vaccine and Infectious Disease Organization.

Pfizer spokesperson Christina Antoniou said in a statement that the vaccine’s efficacy has not been studied on multiple dosing schedules.

In Ottawa, Deputy Chief Public Health Officer Howard Njoo noted repeatedly that there is no data to support extending the interval past 42 days. However, he stopped short of saying it shouldn’t be done and suggested the ethical issues raised by a surge in cases and a resulting spike in hospitalizations and deaths could present an exceptional enough circumstance to justify it.

He added that all medical officers of health, including Quebec’s Horacio Arruda, agree on the importance of sticking to the timeline recommended by the drug companies and Health Canada wherever possible.

“I would like to emphasize that [the advisory panel’s] core recommendation is that the complete two-dose vaccination series follow the authorized schedules for Pfizer and Moderna.”

The second shots wouldn’t be given in Quebec until after the province has given the initial injection to three-quarters of long-term care patients, health care workers, seniors’ homes residents and remote Indigenous communities, an estimated 410,000 people.

Quebec’s strategy might result in “a lot of people poorly protected and nobody properly protected,” said Joyce Shanks, a member of the family advocacy committee at the Maimonides Geriatric Centre, the first Montreal-area care home to be vaccinated.

Maimonides residents are now threatening legal action against the Quebec government for postponing their second shots.

Families have been told that seven Maimonides residents who were vaccinated have since tested positive.

Some residents at the Saint-Antoine long-term care home, in Quebec City, have also contracted COVID-19 after getting their first shots, including, according to local reports, 89-year-old Gisèle Lévesque, the first Canadian to receive the new vaccine.

The local health board would not disclose how many vaccinated Saint-Antoine residents have been infected but cautioned that they may have been exposed before their injections.

Montreal public-health director Mylène Drouin said Wednesday that the matter is being investigated to find out whether older vaccine recipients are not developing as much immunity, or whether they were infected before they had time to build full protection.

Mr. Dubé said the province is particularly concerned about getting shots to people living in seniors’ residences. While those facilities are not as vulnerable as long-term care homes, some have been hit by large outbreaks. The Château Sainte-Marie residence in the Beauce region, for example, has 105 cases. 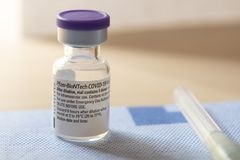 Husband of Quebec doctor who took her own life shines light on pandemic burnout
January 13, 2021 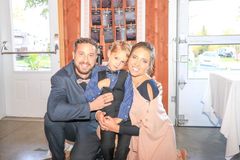 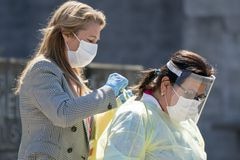 Coronavirus information
The Zero Canada Project provides resources to help you manage your health, your finances and your family life as Canada reopens.
Visit the hub
Follow Tu Thanh Ha and Marieke Walsh on Twitter @TuThanhHa @mariekewalsh
Report an error Editorial code of conduct
Due to technical reasons, we have temporarily removed commenting from our articles. We hope to have this fixed soon. Thank you for your patience. If you are looking to give feedback on our new site, please send it along to feedback@globeandmail.com. If you want to write a letter to the editor, please forward to letters@globeandmail.com.
Comments