François Legault’s government is looking for a way to ban "bonjour/hi,” a bilingual greeting many shopkeepers and receptionists have adopted in Montreal to the great irritation of some Quebec nationalists.

The Premier’s right-hand man on Quebec identity files, Minister of Immigration, Francization and Integration Simon Jolin-Barrette, revealed his intention to crack down on the expression on Friday, about a month after he became the minister in charge of protecting the French language. Mr. Jolin-Barrette’s previous files included the religious-symbols ban for some public servants and cuts to immigration quotas.

When asked by reporters at the National Assembly what he might do to stop the use of “bonjour/hi,” Mr. Jolin-Barrette said: “I’m open to all possibilities."

Two years ago, the Quebec National Assembly passed a non-binding motion asking retailers and other public service providers to stick to “bonjour” because French is the official language of the province. The motion passed 111-0.

“There is a consensus that when we are greeted in public space, it’s the term ‘bonjour’ that should be used,” Mr. Jolin-Barrette said. “I’m responding to the will of the National Assembly.”

It was not clear what form a ban would take, nor how he would get around the free-speech protections in the Constitution. Mr. Jolin-Barrette is drafting an action plan on protecting the French language that he said will include measures to discourage the use of the expression. But he added that he will not have inspectors from the Office Québécois de la langue française conduct stings on front desk workers.

Quebec Liberals were not ruling anything out on Friday. “I’m ready to listen to all propositions of the minister, ready to talk to him, to work with him, to make sure French is well-protected in Quebec,” said Christine St-Pierre, the Liberal critic on language issues. “That’s what is important.”

But the separatist Parti Québécois said extending such a ban into private enterprise would be going too far. “We aren’t going to start telling people what to do in their daily life in private enterprise. It’s not applicable,” said Joel Arseneau, the PQ’s language critic.

“Bonjour/hi,” a greeting intended to signal bilingual services, became an issue in Quebec about two years ago, after a language watchdog found French was in decline as a language of greeting in Montreal.

When Marie Montpetit, a Liberal member of the Quebec government at the time, told an interviewer she found the greeting irritating, the PQ proposed the bonjour-only motion. With all parties eager to be seen protecting the French language, the motion passed unanimously, including among several anglophone Montreal Liberals. Mr. Legault’s Coalition Avenir Québec defeated the provincial Liberals one year ago.

Tension between French and English in Quebec has cooled considerably in recent years. Occasional flare-ups often involve the use of language in private business.

In 2013, the province gained global attention over so-called “pastagate,” when OQLF language inspectors instructed an Italian restaurant to use French words instead of “pasta” and other items on its menu. After weeks of ridicule, the OQLF’s director resigned and the agency slightly softened its inspection regime.

Globe editorial: Taking the ‘hi’ out of ‘bonjour-hi’ won’t save the French language
November 30, 2017 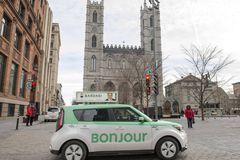 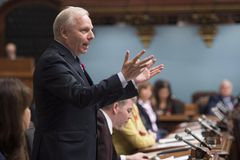