Coalition Avenir Quebec Leader Francois Legault used the last leaders’ debate before the Oct. 1 provincial election to soften his tone regarding his controversial position to expel immigrants who fail a French-language test.

The question of immigration has dogged Legault over the past couple of weeks and he has seen his party’s lead in the polls slowly vanish since the start of the campaign.

His answers to questions about how immigrants who fail a French test would be expelled from Quebec have not been clear – and his opponents have jumped on his stance to paint him as heartless toward newcomers.

“I am not perfect,” Legault said directly to Liberal Leader Philippe Couillard in Thursday’s televised debate. “It happens, I make mistakes, when I answer certain questions on immigration.

“I listen, and I correct my mistakes.”

Legault didn’t specify exactly what he was talking about, nor did he renounce his position that newcomers should be forced to pass a French and values test if they want to stay in the province and become a citizen.

But he did brandish a new line that he subsequently used two more times during the debate.

“The only people I want to expel are the Liberals!” he said.

After the testy exchange on immigration, the theme turned to another thorny issue: the secular nature of the Quebec state.

Three of the four parties who have seats in the legislature want to ban certain state employees from wearing religious symbols on the job such as the hijab or the turban.

Legault, in a one-on-one exchange with Couillard, accused the Liberal leader of ignoring the wishes of the majority of Quebecers.

Polls indicate most citizens in the province want the state to ban people such as police officers and judges from wearing religious symbols at work.

“Do you want a police officer to wear a hijab?” Legault asked Couillard, noting that people in positions of authority should be dressed in a religiously neutral way.

Couillard responded by asking Legault, “Why do you want to remove people’s rights?”

Legault shot back: “Why do you ignore the majority of Quebecers?”

Because a society has to respect and defend its minorities and not legislate based on polls, Couillard said.

“How many police officers are wearing hijabs right now?” Couillard asked, knowing the answer is zero.

Following the exchanges on immigration and secularism, the leaders squared off on the economy.

Manon Masse, a co-spokesperson for the left-wing Quebec solidaire, said wealth begins with people at the bottom of the ladder.

“There are people who try to live on $12 an hour,” said Masse, whose party wants to immediately increase the minimum wage to $15 an hour. “We have to create good jobs and improve working conditions for everyone.”

Legault suggested, “we have to let the laws of the market play and not force things.”

The debate moderator then asked the leaders how they would protect companies from the impact of U.S. tariffs on steel and aluminum and cope with threats by U.S. President Donald Trump to tear up NAFTA.

Couillard said Trump wants to “impose his way on the world.”

“He negotiates in different ways than we understand,” he said. “There has to be one winner and the other has to completely fail.

“All Quebecers must defend their farmers and dairy producers,” Couillard added, referring to reported demands by the Trump administration for Canada to give up its system for protecting some farmers from foreign competition.

At the start of the debate, Couillard was forced right away to fend off attacks from Legault over doctors’ salaries.

Doctor specialists in Quebec make more than $450,000 a year, leaving little money for nurses and other workers in the health-care network, Legault said.

“He just doesn’t understand,” Legault said about Couillard. “Doctors (in the province) are the best paid in Canada, but nurses are underpaid. It’s shameful.”

Couillard responded by saying the salaries translate into “more services to citizens.”

Quebec solidaire has no official leaders but has Masse and Gabriel Nadeau-Dubois as co-spokespersons – and Masse looked somewhat frustrated that Lisee didn’t want to speak about health care, the first theme of the debate.

“Who pulls the strings in Quebec solidaire?” Lisee asked, ignoring pleas from the debate moderator for him to stick to the subject.

Masse answered that in her party, “we learned how to share power.”

Two previous debates – one in French and one in English – didn’t have any clear winners, although a Mainstreet poll indicated respondents preferred Lisee’s performance in the first French debate by a few percentage points over that of the three other leaders. 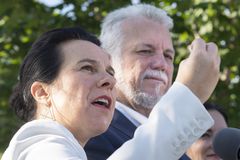 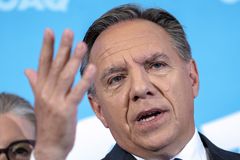 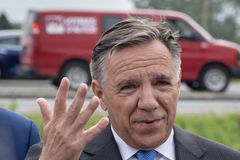