Quebec’s premier says he wants Prime Minister Justin Trudeau to issue an ultimatum to protesters to take down within days blockades that have disrupted rail and road traffic across the country.

Francois Legault says that if a federal deadline is not respected, co-ordinated police action could be necessary to restore transportation links and end what he calls an illegal action threatening people’s jobs.

Speaking to reporters in Quebec City, Legault said he will attempt to rally counterparts in other provinces to his position this afternoon during a conference call among Canada’s premiers convened by Saskatchewan Premier Scott Moe.

The demonstrations are in support of Wet’suwet’en hereditary chiefs who oppose a natural gas pipeline through their territory in northern British Columbia.

Moe says the premiers’ meeting is needed because the blockades have been up for almost two weeks and Trudeau has offered no course of action to protect the country’s economic interests.

A fresh blockade went up on a CN Rail line in Edmonton Wednesday morning: A group called Cuzzins for Wet’suwet’en said on Twitter that it’s staging the protest “in solidarity with the Wet’suwet’en.”

It has posted photos showing a blockade of wooden crates on the train line, with signs reading “No Consent” and “No Pipelines on Stolen Land.”

Trudeau told reporters this morning his government is trying to find a resolution, but also acknowledged the economic impact that the rail blockades are having across the country.

“We know that people are facing shortages, they’re facing disruptions, they’re facing layoffs. That’s unacceptable. That’s why we’re going to continue working extremely hard with everyone involved to resolve the situation as quickly as possible.”

The issue was top of mind for Liberal MPs as they entered their first caucus meeting since the blockades shut down nearly all Via Rail passenger trains across Canada and closed CN Rail freight service on its eastern Canadian network.

Treasury Board President Jean-Yves Duclos said his Quebec City constituents want the government to engage respectfully and peacefully with the protesters, but they also want to see a swift solution.

He also warned against the “long-term consequences of doing this inappropriately.”

“There are matters that some are advocating that would be hurtful, not only in the short term, but in the long term, so we need to be mindful of that.”

Conservative finance critic Pierre Poilievre said he is concerned about the millions of dollars’ worth of goods not moving, because of what he called a “small group of antidevelopment activists who are using this as an opportunity to shut down the Canadian economy.”

He accused Trudeau of not allowing the RCMP to remove the protesters, which he said is escalating the situation.

“They are running the risk of increasing the volatility of this situation by preventing the RCMP from doing its job and enforcing the law and the court-issued injunctions,” Poilievre told reporters.

Canadian Manufacturers and Exporters CEO Dennis Darby has said the crisis is stranding an estimated $425-million in goods every day. 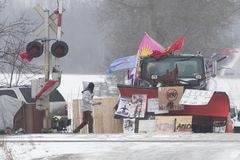 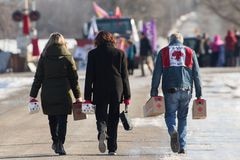 In dealing with protests, Justin Trudeau must be clear about what’s negotiable, and what isn’t
February 18, 2020 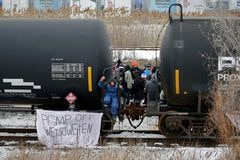