A teachers union is suing Quebec to obtain documents used to prepare the province’s back-to-school plan, claiming authorities are not being transparent about the number of infections in schools.

The Fédération autonome de l’enseignement filed its legal action Monday, requesting the Superior Court order the province to immediately release documents related to the back-to-school strategy and to reveal whether it has set up a rapid-testing system for schools. FAE’s request for judicial review and for an interlocutory injunction came the same day authorities reported 276 new COVID-19 infections across the province.

Roughly 246 Quebec schools have reported at least one case of COVID-19 since classes resumed in late August, union president Sylvain Mallette said in an interview Monday. Last week, health authorities suspended daily updates on the number of schools with cases of COVID-19, saying they were “adjusting” the system.

Mr. Mallette said his union, which represents about 49,000 teachers, has been trying since Aug. 10 to get the government to say whether it has a system in place to rapidly test students, teachers and other school staff for COVID-19 – and to quickly obtain testing results.

“It’s not normal that we don’t know where the outbreaks are, how they are being reported and what the delay is between the moment someone says they have symptoms and the moment they get their [testing] results,” Mallette said.

Last week a judge denied a request by a group of parents to force the province to provide an online learning option for families worried about sending children to school amid the pandemic. Only children with serious medical conditions or who live with someone at risk of severe complications from COVID-19 can be exempted from physically attending classes.

Quebec’s government has insisted that getting students back into classrooms would benefit them and their families.

The province has seen a recent increase in daily COVID-19 cases. Mr. Dubé, the Health Minister, said Sunday that cases have been reported in regions across the province and described the situation as “under control, but concerning.”

A spokeswoman for Mr. Dubé said the department would not comment on the lawsuit. “It is important to note, however, that our government has made testing in schools one of its main priorities,” Marjaurie Côté-Boileau said in an e-mail Monday.

She said each school is assigned to a testing centre and that the province’s back-to-school plan was formulated according to public health recommendations.

Department officials are working “non-stop” to update the government’s list of schools that have reported cases of COVID-19, Ms. Côté-Boileau added.

Public health officials reported 276 new COVID-19 infections Monday, bringing the total number of confirmed infections to 65,262. That marked the second consecutive day Quebec has reported more than 275 cases of COVID-19 over a 24-hour period, after 279 infections were reported Sunday.

No additional deaths attributed to the novel coronavirus occurred over the past 24 hours, leaving the total at 5,780, authorities said. The number of hospitalizations remained unchanged at 124. Of those patients, 19 people were in intensive care – the same number as the previous day.

Quebec said 20,639 COVID-19 tests were conducted Saturday, the last date for which testing data are available. Police in Quebec can issue fines to those refusing to wear masks when obligatory
September 12, 2020 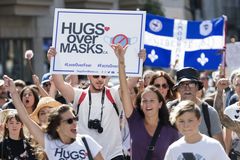 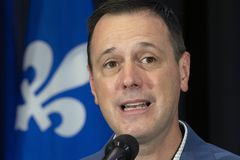