Spurred by the death of an intoxicated high-school student, Quebec will ban the sale of high-alcohol energy and sugar drinks, sometimes known as “blackout in a can” from the province’s ubiquitous small corner stores.

Public Security Minister Martin Coiteux and Public Health Minister Lucie Charlebois announced changes to a law already before the National Assembly to ban the sale of energy drinks, coolers, malt alcohol or premixed cocktails more than 7 per cent alcohol from private stores along with marketing restrictions to make the drinks less attractive and available to young people.

Provincial SAQ liquor stores will be allowed to sell the products over 7-per-cent alcohol content.

Beer, wine and other drinks less than 7 per cent alcohol will still be available in the corner stores, known as dépanneurs. An exception will also be made to allow the sale of craft beers over 7 per cent. The changes have the support of all parties in the National Assembly and should pass easily.

The steps came nearly two weeks after the death of 14-year-old Athena Gervais. Along with some friends, she had stolen three cans of Fckd Up, a drink containing 11.9 per cent alcohol that sold for as little as $3 a 473-millilitre can, from a store near their school. Athena’s father, Alain Gervais, said friends told him she drank one can and then refused to go back to school with her friends. Her body was found three days later in a creek near her school in the Montreal suburb of Laval.

The manufacturer Geloso Group stopped production and pulled the product from stores, but dozens of high-alcohol alternatives remained in store coolers near the soft drinks and snacks. Corner stores in Montreal still had two-for-$5 deals on drinks in brightly coloured 473-mL cans containing 10 per cent alcohol on Tuesday afternoon. (Mr. Coiteux expects the changes to the law to take effect later this year.)

“I didn’t expect the government to move this quickly but it’s heartwarming to see them act,” said Mr. Gervais, who joined a campaign with public-health officials, advocates and Athena’s classmates to get the products off store shelves. “This must not be allowed to happen again, now Ottawa must move.”

Quebec also called on the federal government to impose more restrictions on the premixed drinks that often contain the equivalent alcohol of three or four drinks in one can, which is disguised behind enormous amounts of sugar and energy-boosting ingredients such as guarana. (The combination of high levels of caffeine and alcohol is already banned, although people still mix the two on their own.) The government said the drinks often sold for as little as 74 cents a serving.

The drinks are available in other parts of Canada, but pose a unique regulatory and enforcement challenge in Quebec, where more than 9,000 outlets, mostly tiny corner stores, were previously authorized to sell them, compared with fewer than 1,300 highly regulated booze outlets in Ontario.

Scientists, public-health officials and the Quebec government say the drinks are designed to appeal to young people and get users drunk quickly while masking the taste and effect of alcohol and boosting energy.

“It’s a product designed to deceive people and we are taking a step to put an end to that deception,” Mr. Coiteux said. “But Ottawa still has a job to do.” Ms. Charlebois said the federal government should impose labelling requirements and stricter rules on the contents of the drinks.

Federal Health Minister Ginette Petitpas Taylor has asked her department “to take all necessary steps to address the risks posed by these products including any required regulatory action in close consultation with Quebec,” according to her spokesman Thierry Bélair.

Quebec saw a 316 per cent increase in the sale of the drinks last year, according to the province’s public-health institute. 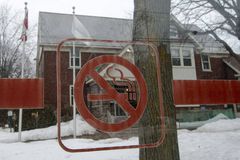