Quebec will implement a vaccine passport system in September in an effort to tamp down the threat of a fourth wave, becoming only the second province, after Manitoba, to restrict some activities to fully inoculated residents.

Premier François Legault said on Thursday that Quebec is requiring proof of immunization in response to a rise in COVID-19 cases and hospitalizations in the province. Six days ago, modelling from the Public Health Agency of Canada showed that more than 80 per cent of people 12 and older will need to be twice vaccinated to prevent hospitals from being overwhelmed in the fall as the highly transmissible Delta variant spreads.

“The principle behind the passport is that those who made the effort to get their two doses must be able to live a quasi-normal life,” Mr. Legault said. “It’s an important message we have to convey ... vaccines work.”

All of Quebec expected to leave highest COVID-19 alert level by June 7: Legault

Mr. Legault said provincial Health Minister Christian Dubé will reveal details of the plan in the coming days. As of Thursday, 83 per cent of eligible people in Quebec are once vaccinated, and 67 per cent have received both doses. Still, case numbers are rising. Health officials in the province have reported an average of 160 new daily cases over the past seven days, more than twice the previous week’s average.

Several countries have started showing interest in vaccine passports. Prime Minister Justin Trudeau said on Thursday his government is considering mandatory vaccination for federal workers and in federally regulated industries. Mr. Trudeau cited air and rail transportation as industries “where it might be very interesting to start requiring vaccination.” Air Canada spokesman Peter Fitzpatrick declined to comment on Mr. Trudeau’s statement, and said the government has not approached the airline about the possibility.

Salem Woodrow, a spokeswoman for Canadian Pacific Railway Ltd., declined to comment, while Brad Cicero, a spokesman for Porter Airlines, said the carrier is considering mandatory vaccines, regardless of any government actions.

Last week, U.S. President Joe Biden introduced measures requiring federal employees and contractors to show proof of vaccination or be subjected to new rules that include mandatory masking and weekly testing for COVID-19. Israel, France and Italy started reserving an array of services and leisure activities for immunized people in July to curb the spread of the Delta variant.

But provinces remain divided. Manitoba’s immunization card, launched in June, contains a QR code that can be scanned with a government app. Manitobans who show proof of vaccination can visit museums, casinos, art galleries and long-term care facilities, and sit with members of different households in restaurants. Immunized travellers from outside the province can skip the mandatory 14-day quarantine.

B.C. plans policies in some sectors, but has not said when they will be announced, or what they will be. “It will be increasingly necessary in many work forces, and particularly in health care, to be able to demonstrate that you’re vaccinated,” Health Minister Adrian Dix said.

Other provinces reject the idea.

“We’re not going to have a split society,” Ontario Premier Doug Ford said.

When asked on Thursday whether Ontario was reconsidering, Alexandra Hilkene, a spokeswoman for Ontario Health Minister Christine Elliott, said the government has been clear that passports would not be mandatory because 80 per cent of Ontarians already have their first dose. Organizations such as the Ontario Medical Association and the Registered Nurses’ Association of Ontario urged the provincial government this week to implement vaccination passports or certificates.

Alberta Premier Jason Kenney has said his government would not facilitate a system in which businesses ask customers for proof of vaccination. He said asking people for private health information would violate provincial privacy laws, and has discouraged businesses from imposing such requirements.

Maxwell Smith, a bioethicist and assistant professor in the faculty of health sciences at the University of Western Ontario, said it might be easy for someone who is pro-vaccination to rally behind the idea of a vaccine passport, but it’s still too early to know whether they actually work. He said provinces must be careful that their policies, while they might boost inoculation rates, do not exclude communities that may have valid reasons for not meeting vaccination criteria, such as international students who received vaccines not approved in Canada.

Still, he said he understands Quebec’s decision. He said a general guideline of public health ethics is to use the least restrictive measures necessary. But as the pandemic lingers and the Delta variant remains difficult to contain, he expects passports to become more common, as long as officials see them as a valid way to protect people.

“Policy makers will, depending on how this goes, think it’s no longer tenable anymore to just see how this plays out,” he said. “I think right now we’re throwing everything at the wall and seeing what sticks.”

Dr. Smith said other provinces should pay attention to the impact of Quebec’s passport on society.

“Now it’s incumbent on us to learn about what works and what doesn’t work, and if it’s being effective at getting more people vaccinated, it’s an ethical responsibility that we have to learn from that.”

In Quebec, businesses and organizations are waiting to find out the specific perks of the passport, and how it might affect them. Mr. Legault stressed that elementary schools, high schools, CEGEPs and universities are expected to hold in-person classes this fall, even though children under 12 are not yet approved by Health Canada to be vaccinated.

No Quebec university has so far required students be vaccinated to attend classes. McGill University media relations officer Shirley Cardenas said on Thursday that discussions are under way with government authorities to adapt the fall plans if needed.

Mr. Legault revealed little about the impact on sectors other than schools.

Olivier Bourbeau, Restaurants Canada’s vice-president for federal and Quebec affairs, called the news positive because restaurants restricted to vaccinated people will probably manage to dodge outbreaks and lockdowns. He stressed that more closings would exacerbate already large debts incurred by the industry in the past year.

“The good thing about vaccine passports,” he said, “is that our restaurants and non-essential businesses will not close.”

With reports from Ian Bailey in Ottawa, Jeff Gray and Eric Atkins in Toronto, James Keller in Calgary and Wendy Cox in Vancouver. 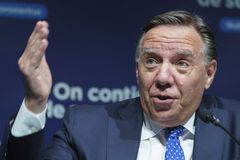 Opinion
With Trudeau and Legault, opacity is the soul of politics
May 27, 2021 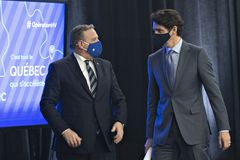 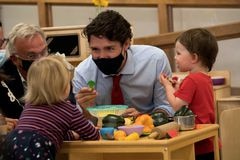