Quebec’s public security minister has warned that due to the COVID-19 outbreak, the province will not be able to open emergency shelters in the event of spring flooding this year.

“The current pandemic is changing the way we do business, and managing a possible spring flood will be no exception,” Genevieve Guilbault said in a statement.

Due to the risk of contamination from the novel coronavirus, the province won’t open shelters for those affected by flooding as it did last year when thousands were forced from their homes.

She has instead asked municipalities to secure hotels or university dorms to house displaced citizens and arrange for other resources such as catering, hygiene products and supplies needed to limit the spread of the virus.

Guilbault also called on residents in high-risk areas to give thought to where they’ll go if they’re flooded out of the their homes at a time when the pandemic has prompted public health orders.

Quebec Premier Francois Legault pointed out Tuesday that there will be more space available in hotels because of the COVID-19 situation.

“The good news is we have many hotels that are empty, so if we need to (accommodate) some people because they have water in their house, we have a lot more rooms available compared to last year,” Legault said in Quebec City.

Spring flooding last year forced thousands from their homes in different parts of Quebec, prompting states of emergency in some communities and intervention by the Canadian Forces.

Particularly hard hit was Ste-Marthe-sur-le-Lac, northwest of Montreal, where the Lake of Two Mountains overflowed its banks and breached a dike that had been due to be repaired.

Guilbault said the province needs to be prepared. “We hope to be spared floods, but we must be ready to face this additional issue that could threaten several regions,” she said. “I’m aware we’re asking for a huge effort, but this is an exceptional context which requires us to act accordingly.”

Francis Martel, a spokesman for the Quebec Federation of Municipalities, said towns have been preparing for flooding and welcomed the minister keeping towns up to date.

“The situation is changing quickly. It’s difficult to have an official response,” Martel said, noting many communities are ready but with the ban on gatherings, planning relief work is complicated.

Guilbault said she spoke to municipal leaders in the Outaouais and Monteregie regions on Monday and hopes to speak to other at-risk areas in the coming days.

A spokesman for the Quebec Red Cross, which works with the province and municipalities to provide emergency relief, said it will adapt to the situation.

“Yes, COVID-19 is changing the way the Quebec Red Cross responds, but its part of our operational plan to come up with solutions and adapt to whatever the situation is,” Carl Boisvert said. 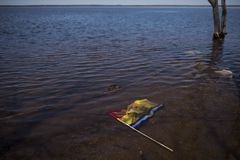 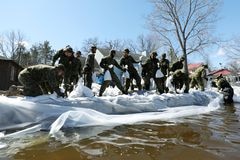