Students in Quebec are the first in Canada to be vaccinated in a program that uses two different vaccines to protect against the human papillomavirus, a change that has divided experts.

The new schedule is expected to save the Quebec government $3-million a year.

Several experts and organizations call the change a risky experiment that puts savings over health. None of the experts dispute the safety of Cervarix. The concern is that students who do not get two doses of Gardasil 9 will not build sufficient immunity to seven of the nine strains. Cervarix, produced by GlaxoSmithKline (GSK), costs about $110 per dose, while Gardasil 9, made by Merck, costs about $190.

“[The change] took a lot of us by surprise,” said Nancy Durand, a gynecologist at Toronto’s Sunnybrook Health Sciences Centre. “It’s a living experiment."

But members of Quebec’s immunization committee say clinical evidence shows the amended vaccine program will protect young people. Committee member Vladimir Gilca says much of the backlash originates from Merck, which stands to lose if provinces reduce use of its vaccine. School-based HPV vaccination programs in every other province use two doses of Gardasil 9.

“It’s nothing new to change a vaccination program. Most of these changes pass without a lot of attention,” said Dr. Gilca, a scientific adviser for the National Public Health Institute of Quebec.

Some of the opposition is because Cervarix has been approved for use only in girls and women in Canada. That does not mean it is unsafe for boys, but it is unusual for policy-makers to use vaccines in this off-label way, said Marc Steben, who works in the unit for sexually transmitted infections of the National Public Health Institute of Quebec.

Some experts fear one dose of Gardasil 9 could leave students vulnerable to genital warts and other less common forms of cancer not covered by Cervarix.

“This is based on pretty skimpy evidence, particularly in terms of long-term outcomes,” said Zeev Rosberger, a psychologist who studies HPV prevention and is on the board of advocacy group HPV Awareness.

But the immunization committee says there are good reasons for the change. The group’s recommendations, published earlier this year, say two studies conducted in Quebec show students vaccinated with Gardasil 9 and Cervarix have high levels of immunity to the main cancer-causing strains HPV 16 and 18. The shot of Cervarix also boosted immune response to some of the other HPV strains included in Gardasil 9. However, the committee notes that immunity levels to HPV 6 and 11, which cause genital warts, are lower in students vaccinated in the mixed program. They may still build sufficient immunity against HPV 6 and 11, but the committee says the province should monitor the issue.

Chantal Sauvageau, a committee member and medical consultant at the province’s public health institute, said Cervarix is approved for boys in Europe. It is not approved here because the company has not applied to Health Canada, she said.

In September, Merck sent a letter to doctors in Quebec stating the company “disagrees with the change in the program" because Cervarix is not approved for boys. The same day, HPV Awareness issued a press release urging the public to ask Quebec’s health minister to reverse the change. HPV Awareness said it received a $30,000 grant from Merck this year to conduct an HPV education campaign. Amélie McFadyen, the group’s executive director, said the company has no input over content.

A week later, the Federation of Medical Women of Canada issued a statement criticizing Quebec’s HPV vaccination changes, saying the “new, untested” plan is “worrisome.” In an e-mail, federation president Kathee Andrews said Merck provided the group with a grant to fund its HPV prevention initiatives.

Merck ran a national ad campaign last week highlighting its role in protecting Canadians against HPV-related cancers and diseases. In a statement, Merck Canada said Quebec’s new program “could put children at risk by inadequately protecting them." The company said it abides by ethics rules when it collaborates with health-care professionals and organizations.

Dr. Steben, who is on the board of directors of HPV Awareness, was lead author of a study on Gardasil published in October and funded by Merck. In the study, he disclosed receiving grants and personal fees from Merck. In an interview, Dr. Steben said the relationship does not affect his views and the company does not tell him what to say.

Dr. Durand said she has been on advisory boards for GSK and Merck and speaks on behalf of Merck at educational meetings. She said the relationship does not pose a conflict.

No link between HPV vaccine, increased risk of autoimmune disorders, study finds
May 28, 2018 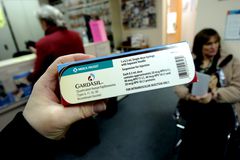