A significant drop in sea traffic brought on by the COVID-19 pandemic has created what scientists call a rare opportunity to study how quieter waters affect southern resident killer whales off the British Columbia coast.

Ocean Networks Canada, which has been monitoring noise from ships and sounds made by marine mammals such as orcas, said it believes the change will be a boon for the animals.

“The anticipation is that the quieter environment will help the killer whales in communicating, in socializing, in navigating and most importantly, in finding food,” said Richard Dewey, the organization’s associate director of science.

A paper published last month in the Journal of the Acoustical Society of America said there has been about a 30 per cent decrease in commercial shipping traffic into the Port of Vancouver from China due to COVID-19 in just the first four months of the year.

Dewey said it’s not just commercial traffic that’s gone down - there’s also been a pause in whale watching boats, cruise ships, recreational vessels and tankers. That’s led to a noise reduction of about 75 per cent, he said.

“What we are seeing in the Salish Sea is levels of shipping noise that haven’t been present for three or four decades,” he said. “So we would have to go back to the 1980s before we would have heard such a quiet environment.”

One of the major concerns for the endangered southern resident killer whales is that shipping noises have been increasing and almost doubling every decade, he said.

These mammals have a hearing that is similar to that of humans, and they communicate in a frequency band similar to ours, Dewey said.

They use vocalizations to communicate within the pod, to navigate and most importantly to find their prey, he said.

“They echo-locate to find their salmon. It’s a very sophisticated sort of acoustic capability and the quieter the environment, they would have more success in finding prey.”

In the ocean, Dewey said whales use sound “continuously and all the time.”

Their eyesight helps them see up to a distance of about five to 10 metres while using sounds helps them scope out kilometres, he said, adding that the Salish Sea is a “very murky environment.”

Scientists believe the loud noises caused by humans increase stress hormones in orcas because they have to shout and cannot communicate over large distances, Dewey said.

He compared it to someone going into a loud club and having to pause until noise passes, to speak more loudly or give up. He noted that unlike people in a club, orcas can’t just leave for a quieter space.

Scientists will be using 30 hydrophones to record sounds made by the killer whales when they come into the Salish Sea, which should be any time now, Dewey said. Hydrophones are underwater recording devices that record how loudly the whales talk when it’s noisy or if they just give up.

The team is hoping this study will yield much-needed data to make policy and regulation changes to help the animals survive, he said.

“If we see them returning and staying in their critical habitat for longer periods … if we have evidence of successful feeding on the salmon, then those are all good signs and in some sense the quieter environments can only have helped their survival,” he said.

The director of the University of British Columbia’s marine mammal research unit said that in the past, killer whales would be seen in the Salish Sea in May and June, but for the past four years they have been coming in much later, sometimes as late as September.

Andrew Trites said one of the reasons could be that there is not enough salmon, although mathematically there is enough fish for the 72 remaining southern resident killer whales.

This has left scientists wondering whether the trouble is that the whales cannot hunt because of disruption from vessels, he said.

“And there is an opportunity to see whether or not the behaviour of whales is different with fewer boats on the water and less noise.”

Western Canada: Scientists are listening for the return of the orcas
June 20, 2020 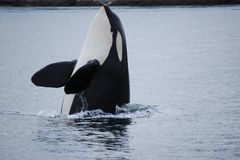