Toronto’s ravines are one of its greatest assets, verdant refuges of health, beauty and relaxation. They are also a shared public space allowing residents of an increasingly stratified city – where people of different income levels inhabit different neighbourhoods, attend different schools and eat at different restaurants – to exist as equals.

At least in theory. But it often doesn’t work this way. Jacqueline L. Scott, a keen outdoorswoman who is Black, so rarely comes across someone like her that she started blogging about her experiences.

“If you don’t see yourself there, you’re less likely to go,” she said. “It’s a sense of, am I going to be okay? And if there’s a group of us, is somebody going to call the police and say, ‘Oh my god, Black people are hanging out in the woods?’”

This is your brain on trees: Why is urban nature so good for our minds, and what happens when a pandemic isolates us from it?

Such concerns can discourage racialized people living near ravines who could, in theory, use the green space as a communal backyard. But full public inclusion in the ravines is an issue that goes beyond race. Women may not feel comfortable walking paths that have blind corners or poor lighting. Homeless people can be kept out by design decisions meant to deter them, such as uncomfortable benches. Torontonians without cars may not realize they can access ravines by transit. Some seniors need to feel confident they’ll be able to find a toilet or a place to sit down.

The hurdle can be as simple as a lack of signs indicating where to enter a ravine. Such wayfinding would be cheap to install, but has sometimes been fought by locals who fear it will bring more traffic and people through what they see as their neighbourhood.

Making all Torontonians feel welcome and at home in the ravines is more than an egalitarian ideal. It can have real health impacts – particularly given that the Don Valley, for example, lies close to tower neighbourhoods hard-hit by COVID-19. Toronto parks staff are keenly aware of these concerns and inclusivity is a key goal of the city’s ravine strategy. Among many tactics, the city is working with the charity Park People to train “ravine champions” who can lead beginners into the urban wilds. Advocates say that what the city is doing is good, but that more remains to be done.

Why some of Torontonians might need encouragement to go into the ravines is complicated, advocates and experts say, and doesn’t necessarily reflect a lack of interest.

Ms. Scott, the blogger, can’t forget the time she was in one of Toronto’s ravines researching the route for a group walk she planned to lead. She and a friend were fully kitted out with hiking gear and clearly not beginners. But people kept asking whether they were lost.

Four times it happened. One person even offered to show them the way to the closest bus stop. While everyone was perfectly polite, she couldn’t help but notice that no one else was getting approached this way.

“It was all very nice, very friendly,” Ms. Scott said. “But it’s like sending the message that if you’re Black in the ravine, and we were deep in the woods, you must obviously be lost cause there’s no other reason why you could possibly be here.”

Ambika Tenneti, a doctoral student at the University of Toronto who researches the engagement of recent immigrants with the urban forest, has found some racialized Torontonians were uncertain about the reception they’d get if, for example, they showed up in a hijab. Others were unclear on what is allowed in a space both unfamiliar to them and seen as overwhelmingly used by white people.

“People I think are concerned … [that] they’re not trespassing or they’re not doing anything wrong,” she said. “Building relationships is something that the city really needs to go out and do in neighbourhoods that have not been engaged in the ravines.”

A variety of volunteer groups and city programs try to achieve this. The idea is that, by training people to lead walks or be more comfortable in the ravines, these areas will be opened up to new Canadians. And once these initiates are familiar, they can bring others, passing along their new knowledge.

“One of the little activities that they have to do is basically try and find somebody that they know and they’re comfortable with who has never gone to the ravine and then take them on a walk,” Brianna Aspinall, who works with Park People, said of the ravine champion program.

Another way to encourage people into the ravines would be better signs, in more languages, that identify entry points and make routes clear enough that people don’t fear becoming lost. But others argue that there needs to a philosophical shift: The city needs to recognize that different cultures have different needs.

“A lot of people of colour communities like to sit and chat around, socialize. They use the space differently,” Ms. Tenneti said. “Ravines are generally trails, so you just have to walk and there’s no place to sit down or anything.”

How much infrastructure to add to the semi-wilds of the ravines has long been a thorny question. Gil Penalosa, Toronto-based chair of the non-governmental organization World Urban Parks, says additions can be made of wood and have minimal impact. He argues for amenities such as benches and natural playgrounds, to make the ravines more usable for both seniors and small children.

How people get to ravines is another issue. Last summer, when parking lots were closed at some access points, it laid bare how difficult some were to reach by other means. While the transportation planning app Triplinx includes urban green spaces in its destination options, once off transit it’s not always clear how to get into ravine.

The Toronto Transit Commission runs buses specifically to a few city green spaces, but most are accessed by hopping off an unrelated route. According to the agency, there are approximately 150 routes – including bus, streetcar and subway – that allow people to disembark within 400 metres of a trail in an urban green space. Rejigging these to bring people even closer is not necessarily a simple matter.

The ravines saw a rise in activity last summer, regular users believe, as people sought outdoor diversion during COVID-19. With the city struggling through a third wave of the pandemic, as vaccinations advance slowly, this summer could see a similar increase. Whether these new visitors represent equitably the city in which they live may determine the next generation of ravine users.

“When people get to know the ravines, people fall in love with them,” Mr. Penalosa said. “Only good things can happen by generating more use of the ravines, giving absolute priority to the low-income areas. When we say we’re going to build back better, these are the kinds of things that we should be doing.” 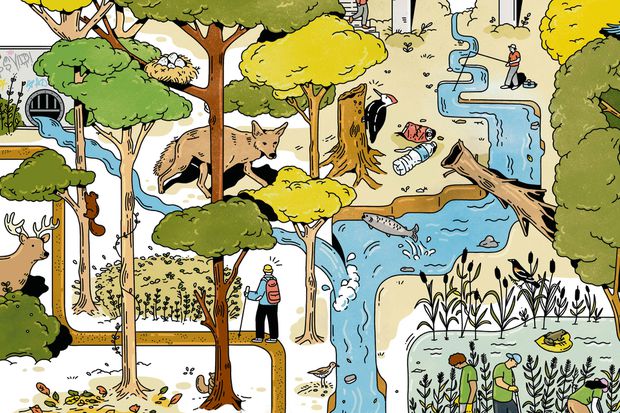 Hike through a virtual ravine

In cities like Toronto where ravines define the landscape, what we imagine is unspoiled wilderness is being constantly changed. Naturalist Jason Ramsay-Brown and illustrator Kathleen Fu show you what to look for.

Marcus Gee: The magic and the mystery of Toronto’s ravines

Why is urban nature so good for our minds, and what happens when a pandemic isolates us from it?

opinion
A ravine-land who’s who: Take a virtual hike through our urban ecosystems and the threats they face from humans
April 17, 2021