A manhunt for two young men wanted in the killings of three people in B.C. remains fixated on a remote region of Northern Manitoba, where a torched SUV was found two weeks ago and more recently, a wrecked aluminum rowboat.

As anxiety lingers among area residents, Manitoba RCMP were tight-lipped about their search efforts on Monday, blocking vehicles and the media from passing north on provincial road 290 near Sundance Creek for part of the day.

A severely damaged rowboat was spotted on Friday along the shore of the Nelson River during a helicopter search, prompting Inspector Leon Fiedler, the incident commander, to call in the RCMP’s dive team from Winnipeg. It’s not known whether the boat was used by the wanted men, Bryer Schmegelsky and Kam McLeod.

The dive team searched underwater on Sunday for about an hour. On Monday, Manitoba RCMP spokesman Robert Cyrenne said the team had completed its work and would not be doing any further dives, adding that there had been “no significant developments overnight” in the case.

Mr. Cyrenne said a police roadblock had been erected to allow officers to conduct additional searches in the area. Yet on previous days, when officers combed through the same dense woods and shoreline, the road had not been blocked. The RCMP did not provide further information Monday.

Mr. Schmegelsky, 18, and Mr. McLeod, 19, childhood friends from Port Alberni, B.C., are suspects in the deaths of American Chynna Deese, 24, and her 23-year-old Australian boyfriend Lucas Fowler. The couple were shot to death on the side of a Northern B.C. highway near Liard Hot Springs and found on July 15.

Four days later, the body of Vancouver resident Leonard Dyck, 64, a sessional lecturer at the University of British Columbia’s botany department, was discovered on a road near Dease Lake, about 500 kilometres southwest of the hot springs.

The uncertainty surrounding the whereabouts of the pair has cast a pall of anxiety over the communities of Fox Lake Cree Nation and Gillam. Residents are returning to their old routines, such as letting their children ride their bicycles and venturing to their cabins, but they’re also keeping careful watch when on the road or in the bush.

It has been two weeks since a couple who were out strawberry picking with their daughter spotted black smoke billowing over the bush near Sundance Creek and found a grey Toyota Rav4 consumed in flames. Police believe that Mr. Schmegelsky and Mr. McLeod were driving the SUV. There have been no confirmed sightings of the fugitives since that day.

“My wife feels uneasy,” lifelong Gillam resident Dan Martin said. “I’m trying to make most days go along as normal as possible. You just can’t let it consume you.”

Many residents spent the long weekend wondering if the rowboat was a much-needed break in the case. Only days earlier, the RCMP had announced that they were scaling back their search because they were out of fruitful leads.

The flat-bottom aluminum rowboat is now at the RCMP detachment in Gillam.

“It had gone through some rapids and had been significantly damaged,” Insp. Fiedler said on the weekend. “Whether it’s the subjects we’re looking for or whether it’s another member of the public, we have an obligation to do a search-and-rescue effort there to make sure that there’s nobody out there as a result of some kind of boating accident.”

Officers did not find anything near the boat Friday night except for a red-and-white water container, he said. The police had last scoured the area by air three or four days earlier.

Manitoba RCMP’s communications department has released few details since the rowboat was found wrecked below the lower Limestone rapids, near the Keewatinoow converter station.

The police roadblock on provincial road 290 was removed around 2 p.m. on Monday. A police staging area had been set up nearby for the day’s search. At the site were sniffer dogs, tactical officers and ATVs, along with a jet boat, an RCMP helicopter equipped with an infrared camera and a specialized ambulance used to traverse over rugged terrain.

The temporary roadblock was several kilometres south of where the damaged rowboat was found and not far from where the torched Toyota was discovered. 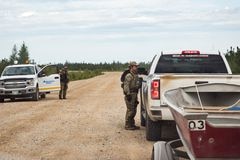 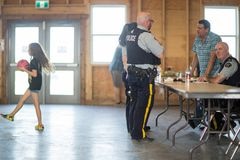 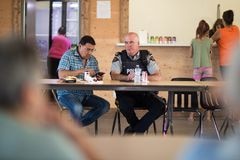 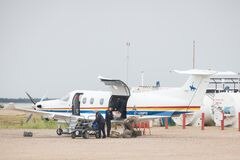