Police in Nova Scotia say it appears a man provided shelter to an armed fugitive who gave himself up to police late Wednesday after avoiding arrest earlier in the week.

On Monday, the RCMP warned residents of Meat Cove, N.S., to remain in their homes as officers searched for 34-year-old Perry MacKinnon, who was wanted on multiple warrants related to firearms offences.

At the time, police said MacKinnon had fled into the woods with a firearm.

A helicopter with heat-seeking sensors was brought in to search among the trees and steep cliffs that surround the remote community at the northern tip of Cape Breton.

On Thursday, RCMP spokesman Cpl. Mark Skinner said police recovered a long gun from the woods, and he discounted reports suggesting MacKinnon was cold, wet and hungry when he surrendered.

“The man was in good condition,” Skinner said in an interview. “It appeared the man had found shelter.”

Skinner said MacKinnon gave himself up to police in the community.

As well, he confirmed that a 49-year-old man from Meat Cove had been arrested for alleged obstruction of justice.

“We believe that the man who was wanted was helped by the second person,” Skinner said, noting that no charge had been laid against the alleged accomplice.

MacKinnon was to appear in provincial court in Sydney, N.S., where he is facing numerous charges, most of them related to firearms and failure to comply with court orders. 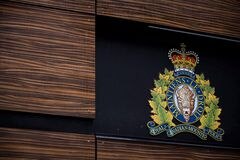