The suspect at the centre of a three-day manhunt in western New Brunswick has been arrested without incident.

The RCMP say the 25-year-old man was arrested by the Fredericton Police Force in conjunction with the New Brunswick RCMP on Sunday.

Police responded to a report Friday night of a man pointing and firing a gun in Medford, north of Tobique Narrows.

The Mounties allege the suspect fled the area in a vehicle and when officers tried to stop him the suspect fired at them, hitting an RCMP vehicle.

Police issued an Alert Ready message on Friday advising residents to lock doors, shelter in place, and stay away from windows.

The RCMP located the suspect’s vehicle Saturday morning near the province’s western border, between Plaster Rock and Perth-Andover but the man evaded capture until Sunday. 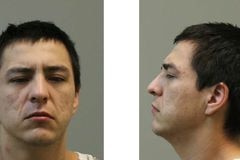 RCMP in western New Brunswick warning people about a suspect who fired at Mounties
June 11, 2021