When Sabia Zargar travelled to Kashmir this summer, she expected to visit family and show her 10-year-old son the places her mother grew up. What she didn’t anticipate was being stuck inside her parents’ home, unable to go outside to get groceries, let alone sightsee.

Ms. Zargar, an educational assistant at an Islamic school in Mississauga, arrived in Jammu and Kashmir in mid-July. By the month’s end, she saw an increasing military presence and rising anxiety among locals.

“People were rushing, trying to stock up things," she said. “Gas stations had big long lines.”

Ms. Zargar and her son are among Canadians who have returned home after visiting India-controlled Kashmir, where a government-imposed curfew and communications blockade meant limited access to food and health care. Locals were also unable to let their loved ones know they were safe. While there are reports that phone connections are returning in some areas, Kashmiris in Canada say they still haven’t been able to reach their friends and relatives in almost a month.

Although Ms. Zargar left Kashmir on Aug. 7, she said memories of army patrols and the smell of tear gas continue to trouble her son. She, too, is still dealing with the emotional impact of the visit.

“I’m so blessed to be here and, equally, I feel so bad for my people over there,” she said.

The region, which is administered by India, is heavily militarized and has been the target of security crackdowns in the past. But this time, the curfew and communications blockade came just before the Indian government made changes to the country’s constitution, revoking Jammu and Kashmir’s semi-autonomous status.

Sadat Draboo and her son, Safee Lone, arrived in Jammu and Kashmir hours before the government shut down phone and internet connections and announced the curfew.

“It was like a prison,” said Dr. Draboo, a veterinarian who lives in Toronto.

As soon as they landed at the airport on Aug. 4, Mr. Lone said he saw army men patrolling the streets. Rumours were in the air that something – they weren’t sure what – was going to happen, Dr. Draboo added.

The blackout was so complete that even landlines weren’t working. There were checkpoints at every corner. Medical assistance was difficult to access.

She said because there were no local physicians nearby, a neighbour approached her husband, who’s a doctor, for help at his home.

The shutdown of communication networks meant that her family and colleagues back in Canada were also left in the dark about her safety.

“They were so worried about me,” she said about the staff at her office. “They literally cried when I reached them.”

Toronto school teacher Saleema Sahibzadi was also visiting the region, as she does every summer. When she woke up on Aug. 5 while staying at her sister’s house, she discovered the internet was no longer working.

Although she was used to seeing army forces patrolling the main roads, this time she noticed there were more of them, and they were present even in the smaller streets. Soldiers stood atop the roofs on either side of her sister’s house armed with guns.

She and her sister were too scared to even look from the upstairs window, Ms. Sahibzadi said.

At one point, they ran out of gas in their home and couldn’t cook anything. They survived on leftovers and raw vegetables from the garden for days, until a neighbour helped them.

“The blackout is a form of collective punishment of the people of Jammu and Kashmir, without even a pretext of a precipitating offence,” said the Special Procedures of the United Nations Human Rights Council, which includes experts from countries including the United States and France.

Idrisa Pandit, a scholar from the Kashmir Scholars Consultative and Action Network, who lives in Waterloo, Ont., said the situation was “the most inhumane treatment of millions of people who have been imprisoned in their own homes and completely disconnected.”

She added that if India and Pakistan, as two nuclear powers, break into war over Kashmir, the impact would be felt worldwide.

"India and Pakistan … have always treated Kashmir as this soccer ball between the two countries.”

In an e-mail on Aug. 29, Global Affairs Canada said 11 Canadians were in Jammu and Kashmir based on the number of voluntary signups to the federal Registration of Canadians Abroad service. But the registry does not necessarily reflect the total number of Canadians in the region, spokeswoman Angela Savard said.

The department said Canada is prepared to offer consular aid, but could not provide information on whether any Canadians were seeking help to leave the region, citing the Privacy Act. 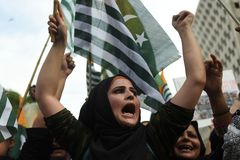 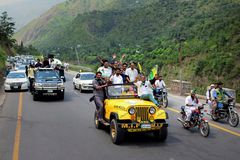