Vehicle emissions on Canadian highways and city streets are changing in ways that affect human health that current air-quality standards and traffic-planning measures are not taking into account, a report has found.

Based on a massive two-year study that measured a suite of pollutants near roadways in Toronto and Vancouver – in some cases as often as once per second – the report, released on Wednesday, offers a detailed look at the types and sources of air pollution from daily traffic that pose a risk to human health.

Among the report’s key findings:

A broader message to come out of the report is that regulations that govern vehicle emissions today are geared to the problems of years ago “when smog would blanket a city … rather that something that’s localized right where a roadway is,” said Greg Evans, a professor of chemical engineering and director of the University of Toronto’s Southern Ontario Centre for Atmospheric Aerosol Researcher, who led the work. The project was conducted in conjunction with municipal and provincial governments and with Environment and Climate Change Canada.

The report distills the results of a dozen peer-reviewed studies by his group into a concise 16-page overview with recommendations for policy makers. Prof. Evans said it shows that all levels of government need to respond to the changing character of vehicle pollution. That includes federal efforts to promote better technologies to cut pollution, provincial rules to get the highest-emitting vehicles off the road and municipal planning that takes into account the local effects of traffic in places where people live and work.

The report notes one third of all Canadians live within 250 metres of a major roadway, a proximity that translated into heightened exposure to traffic pollution. Vehicle emissions have previously been linked to a range of health effects, from cancer and cardiovascular disease to adverse effects on birth and child development.

At the top of the list of recommendations is targeting higher pollution trucks, which have an outsized effect to the point the team could easily measure the improvement between weekday traffic and weekends when traffic volumes remained high, but with fewer trucks on the road. The study found diesel trucks, which are fewer in number than other types of vehicles, contributed about half of all traffic pollutants on city streets and far more on highways.

Christopher Carlsten, a physician and director of the Air Pollution Exposure Laboratory at the University of British Columbia who was not involved in the study, said the truck results are among the most important and actionable to come out of the report.

“We need to identify and remove the highest-emitting vehicles,” he said.

He added Canadian cities, which have better air quality than many cities around the world, can either improve or worsen the health effects of traffic-related pollution with modest changes in emission levels because the body’s response to pollutants depends more steeply on the exposure received when there is less pollution overall.

Prof. Evans said individuals were also in a position to improve air quality through their choice of where and when to drive and in what type of vehicle.

“We can all maintain our vehicles to make sure they’re not part of the problem and we can choose to buy a vehicle that is the size we actually need,” he said.

Pollution could be damaging your brain, research suggests
August 7, 2019 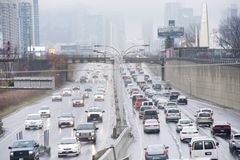 Ottawa to work with California on rules to cut greenhouse-gas pollution from vehicles
June 26, 2019

Opinion
Don’t blame population growth for our pollution problems
May 5, 2019